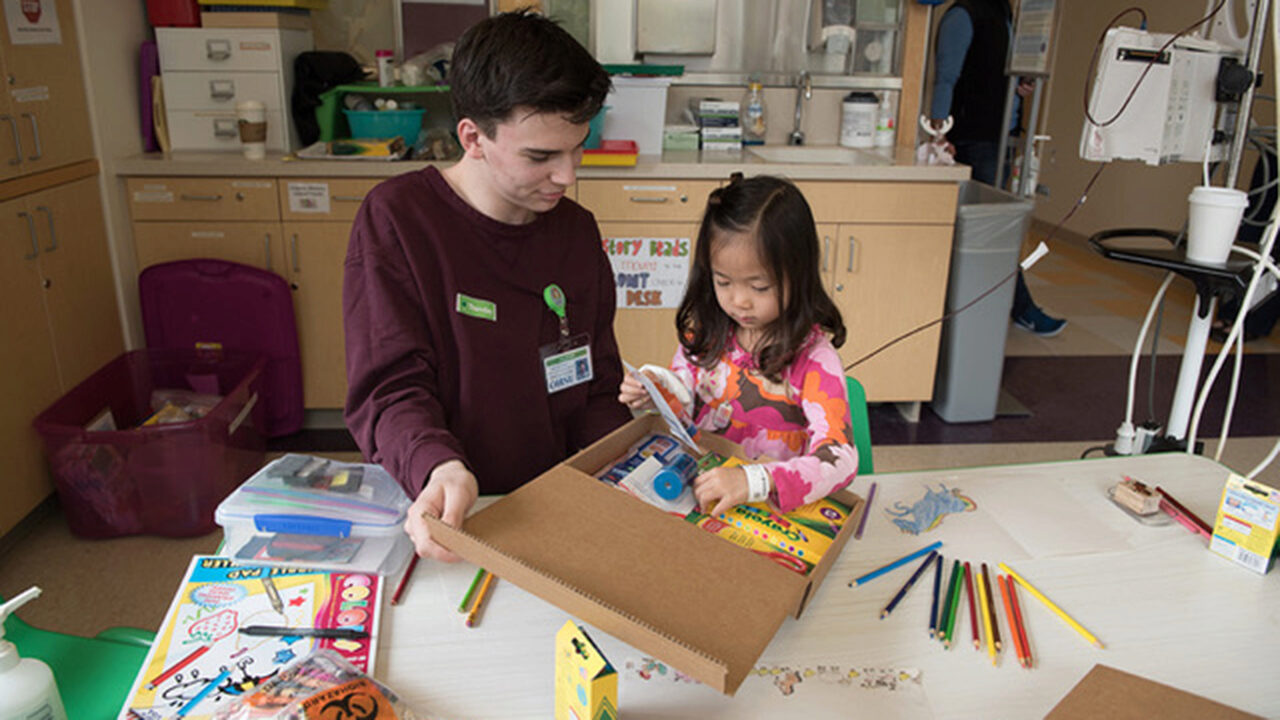 In July 2017, Malcolm A. traveled to Cape Coast Teaching Hospital in Southern Ghana, Africa. Passionate about global health issues and determined to evaluate the international potential for ArtPass International, an art therapy organization that he had started only months before at Doernbecher Children’s Hospital in his hometown of Portland, Oregon, Malcolm needed to immerse himself in Ghana’s health-care culture. More specifically, he wanted to understand how African children experienced the hospital.

“Their hospital experience is very different than our western hospital experience,” notes Malcolm, now 17 and a junior at Cleveland High School in Southeast Portland, Oregon. “More than 5 million kids there die every year from preventable diseases like Malaria and Pneumonia, and part of that is because conditions in hospitals are so poor. All money and donations go toward medical treatment. The emotional well being of these kids is completely ignored. Hospitals don’t have the resources to focus on that. This is really bad for the kids’ quality of life because some of these hospitals are 105 or 110 degrees. Some kids don’t have beds to sleep on because 20 kids are in a ward meant for 10. And even though Malaria could be easily cured in a weekend with a simple pill, kids are not seeking out medical treatment because they fear the hospital experience.”

For Malcolm, seeing was believing. He quickly realized while in Africa for a month that ArtPass, a nonprofit that he launched in 2016 as a way for U.S. children to create and share art to ease their anxiety in the hospital, needed to expand internationally.

“Her whole mood had been lifted, even though she was stuck in her bed and her parents couldn’t be with her. That is the essence of what I want so many kids to experience.” — Malcolm A.

“I spent a lot of time observing inside the hospital for my first two weeks in Ghana,” says Malcolm. “I remember this one girl in the pediatric ward who was about 12 years old. She was going through a really hard time. She was paralyzed from the waist down. Sometimes kids who have no relief from their illness will just walk in circles around their rooms, and she couldn’t even do that. She had been there for weeks. Her face was so sad, and I saw her crying a couple times. I had brought art supplies with me for about 150 kids. I handed some to her and her entire face lit up for the first time since I had been there. For the next two weeks that I was there, she was completely engaged in drawing. Her whole mood had been lifted, even though she was stuck in her bed and her parents couldn’t be with her. That is the essence of what I want so many kids to experience.”

The ArtPass model, which was initially to build a network of national, teen-led chapters in hospitals around the country, has expanded through advocacy and distribution into providing art supplies to hospitals internationally. Malcolm connects with global health organizations that provide essential medical supplies to hospitals to ask if they will simultaneously distribute his art supplies. Since his time at Cape Coast Teaching Hospital, Malcolm has developed partnerships with 10 hospitals, primarily in Ghana, Nigeria and Tanzania. ArtPass International has registered a total of 29 chapters on four continents.

Experts in business expansion suggest that Malcolm has followed essential strategies for taking a business global – expanding his vision and working with global connections to understand and evaluate the market before jumping in. “We have seen small businesses do well overseas when they have connected with local manufacturers or distributors they can trust,” write Karl Stark and Bill Stewart, founders of Avondale and contributors to Inc. magazine. “Where there is a clear opportunity and well-designed strategy, we have seen many small businesses create significant value in their global operations.”

As the organization’s founder and executive director, Malcolm has also devoted lots of time and energy to taking ArtPass international. In doing so, he has learned some valuable insights about identifying and penetrating global markets.

Malcolm is focused on extending ArtPass International’s reach, marketing largely through social media to South America and across Africa. He receives global ambassador applications from around the world, often from other high school students who want to get involved with the ArtPass global mission to make art supplies available to hospitals across developing nations. A part of the organization also still works on domestic programs in the U.S.

“We’re using art supplies to change how kids perceive and experience the hospital to really diminish that stigma around hospitalization,” says Malcolm, who plans to pursue a career in pediatric medicine and global health. “Our goal is also to educate and encourage more kids to seek out medical attention and to improve the overall quality of life in hospitals. Once kids have a brighter hospital experience, we can slowly work toward a world where kids are not as afraid to seek out medical attention and more willing to get the care that they need. We want them to see that the hospital is not a scary place.”

What helped Malcolm Asher the most in expanding his nonprofit globally?

Have you ever spent time in the hospital? Would access to art supplies and being creative help to ease your anxiety? What do you think about ArtPass International’s mission to focus on the well being of hospital patients?

What is your biggest takeaway from this article? What will stay with you the most?

Future of the Business World: Adventures in Group Innovation and E-Learning