“Youth building a Latin America without poverty” is the campaign slogan of A Roof for My Country led by Mercedes Gregorini, a 22-year-old Argentine student in her last year of journalism school. In addition to empowering young people toward social change, the non-profit also helps prepare volunteers for the work force.…Read More 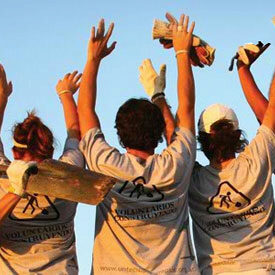 Last year Franco Luciani, a 19-year-old medical student, was stepping out of his protective high school years and into the uncertainty that many teens experience: doubts about what path to choose, how to enter the labor market and how to embark on a successful career. Recognizing that every new experience helped to inform the decisions about his future, Luciani joined some 400,000 other student volunteers in Latin America as part of “A Roof for My Country” (known by the initials UTPMP in Spanish). This organization, founded in 1997 by a group of college students, galvanizes young people living in 19 Latin American countries to help improve the neediest neighborhoods in their regions.

“I participated in my first organized [charity] collections by UTPMP when I was 18,” says Luciani. “Later, I got involved in building homes and organizing events for collecting funds. Now we are about to launch our annual National Collection, which will bring 15,000 volunteers into the streets on September 9 and 10.”

“Youth building a Latin America without poverty” is the campaign slogan of the nonprofit organization led by Mercedes Gregorini, a 22-year-old Argentine student in her last year of journalism school. “I had barely finished high school when I got started doing this,” recalls Gregorini. “I had coordinated a high school mission that involved helping to bring food and clothing to families in the Argentine province of Corrientes, where we used to go once every year. I felt powerless to do anything specific for these people.”

The organization’s model for social participation comprises three stages: constructing housing, getting neighbor involvement and creating sustainable communities. Gregorini and her co-workers have helped to mobilize about 18,000 Argentine volunteers to build more than 3,400 housing units in 57 neighborhoods, while also launching the social development of 32 neighborhoods. “The way this organization works is by getting young professionals involved in contributing their knowledge,” says Gregorini. “They provide you with a lot of working tools that you can apply in a company. The organization is established in hierarchies — a professional level and team leaders who provide apprenticeships. When you are a volunteer, they give you tasks to do where you have to manage groups of people and divide up the work, and these skills can be applied in a company on a working level.” Gregorini already works in a private-sector company in the field of internal communications.

‘I Saw It as My Obligation”

A Roof for My Country’s first stage of development is constructing emergency housing for people in poor living conditions. “The first neighborhood I visited in this stage was Escobar, in Buenos Aires province, where I began to hold meetings with needy families to evaluate their situation and prioritize their needs by using various surveys,” notes Gregorini. “I was going on Saturdays, from morning until midnight, and I saw it as my obligation.”

The emergency living quarters are built on 15 foundations isolated to protect them from humidity, pests and floods. The housing units are only 18 square meters in size, have no basic services and are easily assembled because they are prefabricated. Each costs only US$2,050. The family beneficiaries bear 10% of the cost of the housing to demonstrate their commitment to the project. In addition to the volunteers, other people collaborate in assembling the houses, including employees of the companies that sponsor the initiative.

The second stage, which consists of “social entitlement,” involves getting neighbors to participate by working along with the volunteers to find solutions to the problems of each settlement. The idea is to establish plans for education and health care, provide vocational training, give micro-loans, offer legal advice and enact other initiatives.

“In the second stage, we invite neighbors to participate in weekly meetings to deal with the situation and figure out how to resolve problems,” notes Gregorini, who studies at the Argentine Catholic University. The essence of the second stage is that “neighbors have to show their skills. They are the ones who know their neighborhoods better than anyone else, so we depend on them to make the changes. We want to provide them with training and legal advice.

In its final stage, the organization establishes specific initiatives for a neighborhood that is now united and organized as a single community — the sort of neighborhood that is self-sustainable and works together to manage special solutions for improving its quality of life. Although this goal has been achieved in Chile, there is still a long way to go in Argentina because work began there only as recently as 2006.

Gregorini describes the situation this way: “In Argentina, we still haven’t been able to make the shantytowns into sustainable communities. Our goal is to provide a presence for the government, police and basic services that can be integrated into society. Now these neighborhoods can count on high-quality housing along with access to ambulances and other indispensable services such as public transportation.”

Luciani agrees that “this is a gradual task. Change is not something that takes place quickly but at the pace of an ant moving toward its goal of forming a sustainable community. You see changes in social capabilities when neighbors begin to get together to build streets or a community location for getting together every week. You see separate neighborhoods that begin to develop relationships [with each other] and search for a common goal.”

Adds Luciani: “Every day we learn new things, and this can help me in my professional life as a doctor. We learn to work as a group and to manage projects that start from scratch; they teach you how to control yourself in life in general.”

Gregorini is thinking of continuing her voluntary activities along with five of her six brothers. “I now have more hope than before, and I am committed to trying to change things.”