Facebook, YouTube, Twitter, Foursquare – they are all part of your everyday life and part of the larger universe of social media. What exactly is social media, and how is this wide network of virtual interactions changing the world of information technology? …Read More 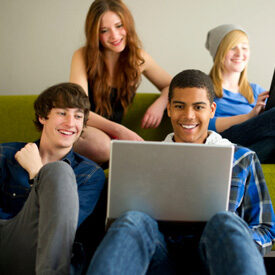 You have more than a thousand friends on Facebook and even more tagged pictures. You follow a hundred people on Twitter, and you know how to read #hashtags. You’ve seen Rebecca Black’s “Friday” YouTube video an embarrassing number of times. Social media is part of your daily life. It is how you communicate with friends, share information and express yourself. But what does social media, a term that is part of our everyday vocabulary, actually mean?

According to Deirdre Woods, associate dean and CIO of the Wharton School, “Social media are Internet platforms that connect people through dialogue, photos and videos. Social media differs from other networking tools because of its multipliable power — you can be a friend of a friend of a friend of someone on Facebook.” Social media creates a wide network of virtual interactions generated by the people who use them. By “friending” someone on Facebook, posting on a blog or sharing your music on Spotify, you are both using and creating social media.

Still, the best way to define social media may be to contrast it with older print media. Social media is unique because it is nearly universal, has a large-scale reach, requires no specialized skills and is immediately available. Unlike newspapers and magazines, anyone with a computer or cell phone has free access to information on social media platforms. While a writer for The New York Times must be a highly trained expert, any high school student has the ability to post on a personal blog like Tumblr. Unlike print media, this blog post is available for anyone to read immediately. If this student stands out, his or her blog has the potential to reach hundreds, if not thousands, of people. Also, whereas a printed article cannot be adjusted once circulated, social media is constantly edited. Once a Wikipedia article is published, it is continually modified until accepted as correct.  Social media is instant virtual information for everyone, created by anyone.

Traditional media still has some advantages over social media. Anyone can post on Twitter or YouTube, but that does not mean he or she will be taken seriously. Information from a prestigious magazine like The Atlantic or a trusted news source like BBCTV, on the other hand, is considered fact. Thus, users of social media begin as novices in a field. In order to establish what is called “social authority” on, say, a music blog like Hype Machine, subscribers need to post songs regularly until other users realize their keen ability to locate new artists.

Not only must individuals establish social authority online, but businesses also need to gain consumer trust on web-based forums. By having Facebook users “like” them and comment on posts, companies use social media to demonstrate customer support. This strategy is based on the assumption that someone would be more inclined to buy products from a company recommended by a friend than by the company itself. At the same time, Woods remarks, “I don’t think companies have been that successful in leveraging social media because of this authenticity issue.” Businesses have not yet determined how to present themselves as entities with “genuine” intentions and not as exploiters of social media.

While social media influences how we interact in the world, Woods notes that such modes of communication can be double-edged swords. “Social media presents media first. This can be good or bad depending on what side you are on. The Arab Spring and the London Riots were organized through social media.” Also, she warns, “Sophisticated people could manipulate social media to present inaccurate information.” Social media is a powerful tool that has both positive and negative real-world effects.

Where is social media going? “Geo-location technologies like GPS on cell phones will create an increased blending of online world and real-world interactions,” says Woods. “For example, you might Tweet that you are at an Eagles game, and a friend who sees it could meet up with you.” Foursquare is one of the most popular location-based social media sites with 381,576,305 check-ins last year. Foursquare is a cell phone application that allows users to virtually “check in” at different locations, thus notifying friends where they are and granting them points for their number of visits. In this way, places on Foursquare become more popular as friends use social media to meet up at participating locations, like bars and restaurants.

According to a study by Search Engine Journal, Twitter now has more than 200 million registered users. Between 2010 and 2011, registered users on LinkedIn, a network for professionals, increased by 138%. People who use Flickr, a photo-sharing website, upload an average of 3,500 images per minute, and Wikipedia has 17 million articles as of 2011. If Facebook were a country, it would be the third largest in the world.  Social media is only growing to become more integral in our everyday lives. It determines who our friends are, whom we work for, what we know about the world and even how the world sees us.

3 comments on “What Is Social Media?”