I Spy … A Teenage Driver

While they may not be dressed in black with concealed digital cameras in their belt buckles, parents these days are learning spy strategies. They are shopping stores like The Spy Place to find just the right tracking devices for their teens’ cars. What’s next – bugs in book bags? Well, yes.…Read More 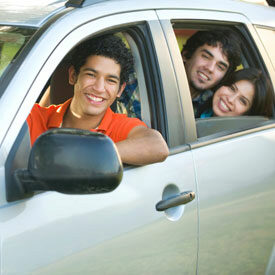 When Brittany Smock turned 16 in 2007 and got her license, the keys to the car came with one big condition: that the car would be fitted with a high-tech Global Positioning System (GPS) surveillance system.

If Brittany is speeding, if she misses curfew or is traveling to a place she wasn’t given permission to go, her mom will know it. “I was pretty mad,” the 17-year-old Indiana high school senior recalls feeling. “And I was scared because I didn’t want her to know where I was.”

Teenage drivers of the 21st century, watch out: Parents are finding plenty of 21st century technology to keep tabs on you.

Brittany should have seen it coming — even if the GPS feature is still a relatively new technology. After all, her mom, Tami Smock, is the store manager for The Spy Place, a Fort Wayne, Ind., business that specializes in affordable, remote-viewing video surveillance systems for homes, businesses — and now — cars.

When Raymond Huck was 16, he asked to borrow his brother’s car to go to a friend’s house. At least, that’s where he told his brother he was going. Huck actually took the car to Connecticut, two states away from where he lived.

These days, Huck, 53, who owns The Spy Place, is running a profitable business by making sure today’s teenagers can’t be as sneaky as he was. Nanny cams, hidden cameras, listening devices and bug detectors are among the store’s surveillance offerings. The Spy Place also offers a personal protection line that includes pepper spray, stun guns and tasers. “It’s a parent’s responsibility to know where their children are,” Huck says. “It’s a parent’s responsibility to know they’re safe.”

According to Huck, if a teen is going 45 mph in a 35 mph zone, a GPS surveillance system can tell parents the name of the street and their child’s exact location. For example, if a teen attempted Huck’s out-of-state joy ride, his parents could be alerted, via text message, before he had driven even two miles past his alleged destination. And tracking can go well beyond the car: Huck says it’s even possible to put a GPS in a child’s book bag. “I appreciate as a child that rights are being infringed upon,” Huck acknowledges. “But as a parent, we’re required to protect [our kids] to the best of our ability.”

At the moment, most teen surveillance seems to be focused behind the wheel. And with car insurance for teens historically high — thanks to the high rates of accidents among teen drivers — some insurance companies are partnering with surveillance companies to offer parents a way to monitor their child’s driving and lower their premiums. American Family Insurance offers DriveCam through its TeenSafe Driver Program. DriveCam monitors driving behavior through a camera inside the car and can email a parent if the driver demonstrates any unsafe driving practices.

Brittany admits that while she resisted the idea of the GPS at first, her mom had good reason to want to keep tabs on her. “I have messed up a little bit, so I understand.” But for Brittany’s mom, the results of having the power to spy have been surprising. “We fought less in life,” Tami Smock says. “I am no longer suspicious. I know where she’s been. I don’t even have to check it very often.”

Mother and daughter also say that beyond keeping tabs, the GPS has real safety benefits that Brittany has experienced firsthand: When the teen had car trouble on the side of the road, she wasn’t able to call for help because her battery had died. Brittany was able to connect directly to her mom’s cell phone via the GPS system.

While such surveillance systems are relatively new to the market, having only become widely available to consumers in 2008, they may soon be flooding the shelves — and the Internet. Websites such as GPS Teen Tracking offer the “RT Tracker” which offers parents real time tracking of their teen driver, as well as a GPS tracking key, which allows parents to retrieve information about where the car has traveled.

Kids may hope parents remain focused on the car: Huck says that he offers GPS tracking devices small enough to be inserted into a student’s book bag flap — which means parents may eventually start tracking teens who aren’t necessarily behind the wheel. And recently, the first iPhone spy software, Mobile Spy, was made available. The application would, among other things, allow parents to monitor incoming and outgoing text messages.

If media reports, new websites and bricks-and-mortar spy shops are any indication, the retail spy business is booming. The Spy Place may even be coming to a shopping center near you. The company recently made franchising available, and Tami Smock says there’s been a lot of interest by investors looking to open the store in new regions.

But for the moment, Brittany says that she’s the only one of her friends with a GPS surveillance system in her car. As she notes: “Not many of my friends’ moms work at a spy place.”