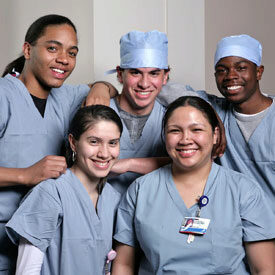 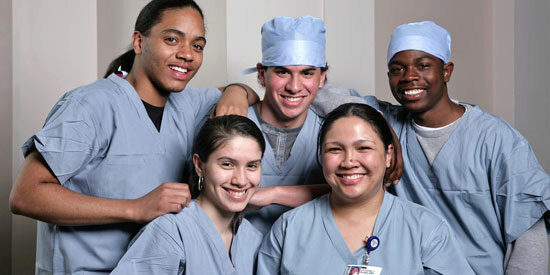 Daniel Rodriguez, a junior at Boston Latin Academy, has always excelled in science. But it wasn’t until he began studying anatomy in high school that something clicked. “I was like, ‘Wow… I really like this,’” says the 17-year-old. “That’s when I knew I wanted to become a doctor.”

There was just one problem. Rodriguez had self-esteem issues. “I never really thought I had what it took to achieve a career like that,” he says. “I was always second guessing whether or not I was good enough.”

Through the Student Success Jobs Program (SSJP) at Brigham and Women’s Hospital in Boston, Mass., Rodriguez is getting that boost of career confidence he needs. Established by the hospital in 2000, SSJP is a year-round paid internship designed to introduce medical, health and science professions to students from seven of Boston’s inner city high schools. Currently there are 75 students, mostly from minority communities, in the program.

“We’re looking for kids who have a passion for science or medicine or just for taking care of others,” says Amy Belyea, youth development manager for Brigham and Women’s, a teaching affiliate of Harvard Medical School. “Our goal is to nurture that passion by giving them the tools and the support they need to achieve successful careers.”

Since his acceptance into SSJP, Rodriguez says he has learned to believe in himself and that he can achieve anything he puts his mind to — even becoming a doctor. Now I have the initiative to say, ‘Okay, this might be a big goal for me, but I’m going to go for it.’”

Based on the students’ strengths and interests, they are placed in one of the hospital’s 60 departments, including the operating room, podiatry, radiology and various clinical and research labs.

Within their assigned department, they are then matched with a mentor who provides them with hands-on work and guidance. The interns, who work 10 hours a week during the school year and 25 hours a week during the summer, perform duties that range from answering phones to escorting patients to preparing anesthesia carts and helping to extract DNA from mice tails.

According to Rodriguez, who is beginning his second year working in the radiology department’s clinical spectroscopy lab, the most rewarding part of his internship has been building a relationship with his mentor, Alexander P. Lin. “When I started in this department, I didn’t even know how to say spectroscopy,” jokes Rodriguez. “Thanks to Dr. Lin I’m learning how to research and analyze data and how MR [magnetic resonance] imaging can better help patients.”

Rodriguez’s primary responsibility has been to assist with data analysis of the chemical profiles of the brains of professional athletes who have a history of repetitive head injury, says Lin. Once Rodriguez turns 18, he will be old enough to work around the MRI machine, possibly witnessing exams and maybe even operating the machine himself under supervision.

Lin says he strives to help Rodriguez understand the value of an education. “Since landing in the health care field, I see now how math, physics and biology all come together to help a patient,” he says. “If I can help Daniel see that, too, it will hopefully give him the motivation to study hard.”

According to 17-year-old Taija Martin, a senior at Boston’s Edward M. Kennedy Academy for Health and a third-year intern with SSJP, the program has given her so much more than work experience. “I come from a low-income family, my parents came here from Jamaica and my sister and I are the first generation to go to college,” says Martin, who recently completed her college applications. “Without SSJP’s support, I might not have been able to do it on my own.”

Juniors are encouraged to participate in college prep workshops that provide intense support for the college application process. Senior interns are also eligible to apply for the SSJP Scholarship, which provides financial aid during the first year of college.

“For students interested in pursuing degrees in health or science, the first thing I tell them is to take a lot of advanced science classes in high school,” says Anna Portnoy, an education and tutoring specialist who offers college prep guidance to SSJP interns. “It’s also important for their overall college application to reflect their passion for the health sciences.”

Whether writing college essays or beefing up their résumés, Portnoy suggests that students come up with experiences they have either had, or could have, that they can apply to their field of study, such as a science fair project or a job shadowing experience.

“My advice for students pursuing a health-related career is to keep in mind that there are many opportunities in health care beyond doctors and nurses,” says Lin. “Increasingly, medicine is becoming a multidisciplinary field and skills as diverse as computer programming or administration can be very valuable.”

With a goal of going into the pharmacy field, Martin recently applied to Massachusetts College of Pharmacy and Health Sciences and Northeastern University. In this profession, Martin would work in a research setting to develop and test new medications. Pharmacy is in demand right now, says Belyea, as are LPNs (licensed practical nurses who are certified in basic patient care) and medical technicians. Some interns express interest in public health and health education. Most hospitals allow young people to start volunteering at age 16, she adds. “No matter what area you’re interested in, getting experience in a health care environment is so important. You wouldn’t want to go all the way through nursing school and then, during your clinical [working in an actual health care setting before graduation], realize you don’t like it.”

SSJP’s former interns have ended up as nurses, lab technicians, medical secretaries and social workers. Some 96% of SSJP alumni are either in college or college graduates, and 85% of those are pursuing health, science or medicine. Among those alums is 22-year-old Tanya Young, who recently graduated from Regis College in Weston, Mass., with a degree in nursing. During her SSJP internship, she often worked directly with patients, which she says solidified her desire to become a nurse: “The program helped me figure out what I wanted and how to get it, to be confident and to never give up.”