When was the last time you scarfed down a Big Mac at McDonald’s? For some high school students, fast food is a way of life — and not a very healthy one. Christopher Bolden-Newsome, community farm director and educator with Seeds for Learning-Beyond the Farm, a program that helps inner-city kids at Philadelphia high schools plant their own urban gardens and learn about nutrition and business, is a leader in the food-justice movement. He talks about his Seeds for Learning work and why the food justice community, which advocates access for all to good, healthy foods, is growing. …Read More 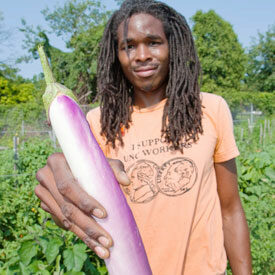 Knowledge@Wharton High School: We’re here today with Christopher Bolden-Newsome who is the community farm director/farm educator with Seeds for Learning, which is a program that runs under Foundations, Inc., an educational nonprofit organization. Specifically in Philadelphia they work with four schools in the northwest region [including Martin Luther King High School]. How has Seeds for Learning-Beyond the Farm incorporated entrepreneurship, agricultural sciences and community action into one program?

Christopher Bolden-Newsome: It’s a work in progress and it’s still evolving. Some of the ways in which we’ve tried to combine those three really important components have been through a pretty intensive food justice education program that I coordinate using a problem-solving approach to education. That means that I don’t teach the answers to my co-workers, but that I try as much as possible to present issues of food access — particularly in our community in West Oak Lane — and other food justice issues as problems to be solved — as problems to be thought about and picked apart. And that hopefully my young co-workers who will inherit this world will be able to actually pick apart themselves and do something with.

KWHS: What was the genesis of the idea to incorporate urban farming into an entrepreneurial program?

Bolden-Newsome: We host two markets currently — a farm stand on Mondays and more recently a Food Trust market. Food Trust is an organization that runs farmer’s markets in the Philadelphia area. The entrepreneurial component was considered as part of what would get the kids interested in doing the work as well as teaching them some sort of business skills.

KWHS: Do students go there and sell the produce that they grew? What is the procedure behind that?

Bolden-Newsome: The program is much more than just an entrepreneurial venture. They do sell the produce that they raise. But that is sort of the end result. The focus that I try to put out to my co-workers is on the production — the growing of the food — on all of the processes that go into making this food available for the community that they live in, and ensuring food access as well as food awareness. The entrepreneurial component is super important. It’s the end result. And the kids happen to do very well at it.

KWHS: How has Seeds for Learning’s location in Philadelphia impacted both your business and your agricultural decisions? Have you had to consider any factors because you’re in a city setting?

Bolden-Newsome: Definitely, because we’re in a city and also because we’re in Northwest Philadelphia. There are certain issues that come up in the neighborhood where we’re working and going to school that may not necessarily be the case in other parts of the city. One way in which our location has impacted the work — particularly from the entrepreneurial perspective — is that it’s imperative that we accept WIC [Women, Infants and Children] benefits and senior benefits because that’s the way so many members of our community supplement their meals. Whereas in West Philadelphia, you may have a lower number of people actually enrolled in the food stamp benefits program or maybe less people statistically who receive WIC, it’s much more important in West Oak Lane.

Also, we price according to the neighborhood that we’re living and working in. Those are some factors that we have to consider even as we get the word out. Also, Northwest Philadelphia is in an area where there are very few good food options — healthy, organic food options. We have to take into consideration that a lot of the work is going to be about turning people on to this type of eating. Or, rather, reminding them of how their parents or their grandparents used to eat when people used to cook.

KWHS: Is the food that you grow organic? Do you use any pesticides?

Bolden-Newsome: It’s completely pesticide-free. We are an all-organic farm. We use sustainable practices in our production.

KWHS: How is this project funded? Have you come across challenges in keeping the initiative going due to the recession?

Bolden-Newsome: Thankfully, our program is underwritten by Foundations, Inc. Foundations, Inc., our parent umbrella organization, does support Seeds for Learning with various private sources of funding. We don’t have to make all of the money to support our program, which is a blessing. We support ourselves in a variety of ways. A small amount of what we do is supported by the money that we raise at the market.

KWHS: How did you get involved with Seeds for Learning?

Bolden-Newsome: I got a call through the farming community. Urban farmers — especially in the northeastern United States — are a pretty tight community. And it’s a growing community. The food justice community is pretty well connected. We mostly know each other or know of one another. It was an opportunity that presented itself and I was free to take it.

KWHS: Could you explain just briefly about the Food Justice community?

Bolden-Newsome: I’m creating a term by saying the food justice community. Food justice is an idea that has to do with approaching the problem of food access and the inequities in our food system — particularly in low-income and poor communities, particularly in communities of color — from a justice perspective.

That means raising food in sustainable ways, getting food to people that is culturally appropriate that can be accessed in ways that are acceptable, and food that is good for them — good for people. So when I say food justice, those are some of the ideas that I am referring to. There’s a community of people built around this idea and it’s a growing community.

There are farmers who just do agriculture and what they call agri-business, or large farmers in agricultural enterprises. And then there are local farmers that include small urban farms and family farms. What you’re seeing right now across the nation is the growth of people who are becoming more aware of the impact that our work has on people, on the environment and on future generations.

KWHS: Back to Seeds for Learning at the high school. Do you operate year-round? And, if so, what are some of the components of the project that change with the seasons?

Bolden-Newsome: It is a year-round program in terms of working with students. We are employing right now five young people from various schools. They’re working in the summer and being paid to do that.

During the wintertime when we’re not growing things — obviously things aren’t going to be growing in the field in January — we are fortunate to have a greenhouse built on our property. We can continue into the winter months with the greenhouse production, which of course does not get the yield or quality that food grown in the earth does. But it does serve as sort of a laboratory.

My plans are to have the students at King become more integrated in the life of the farm and the farm to become more integrated in the life of Martin Luther King High School. The greenhouse will be very important in making that happen so students will come out. They’ll see how plants are started for the next season. They’ll see what crops we keep growing continuously throughout the winter, they’ll ask questions and they’ll learn.