Perhaps you have seen them featured on the “Today Show” or heard how President Obama singled them out during a speech this fall as high school student role models. They are the Philly Hybrid X Team, a group of West Philadelphia High School students who have designed and built the K-1 Attack hybrid supercar. Sure, the car is cool — but the team’s impact on the world may be even cooler.…Read More 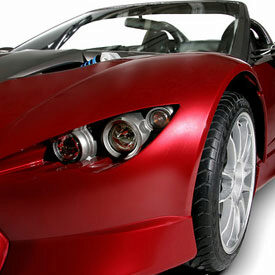 Azeem Hill, 17, was just looking for something to do after school a few years back. “School wasn’t that interesting to me,” admits the senior at West Philadelphia High. For Hill, joining his school’s Automotive Academy seemed like a good way to stay busy and stay out of trouble. It wasn’t before long that Hill became team captain of the Philly Hybrid X Team, overseeing up to 20 fellow students as they worked on one of their boldest projects yet: designing and producing the K-1 Attack hybrid supercar.

“Our inspiration for the project,” notes Hill, “was the fact that these technologies were already out there. We thought it would be a good opportunity to let the world know.” He says the project really changed peoples’ perceptions about the urban high school students, especially as the team hit the headlines and was featured on the “Today Show” and in other high-profile media outlets. “We broke down stereotypes,” he says, “by building a car and a marketing plan to support it.”

Most cars aren’t built at city high schools. But this Automotive Academy has been doing something unique ever since Simon Hauger started the program 13 years ago. The engineer-turned-science teacher was looking for a way to interest students who were bored by textbook learning. He wanted to get kids, who were on the fast track to dropping out, involved with a program that would allow them to stretch their creativity and imaginations. The team has won several prestigious awards and received funding from major corporations around the country.

“In 2002, we won a national road rally and beat colleges like MIT,” says Hauger, director of the academy. In the years following the big win, new students joining the team wanted to create a hybrid that was fast (of course), sexy (it has to be) and fuel-efficient (the future). “They wanted to show folks that hybrid technology could be used in a different way,” Hauger states. “We created a car that looked really good and was cool.”

The flashy red convertible — complete with doors that open upwards — looks like the Batmobile meets Back to the Future’s DeLorean, a reference to the DeLorean DMC-12 sports car. The convertible was built two years ago using a standard K-1 Attack Slovakian car kit, notes Hill. But it’s a biodiesel-burning hybrid that gets up to 60 mpg and has a Volkswagon turbo motor for the rear wheels and a 200 hp electric motor from AC Propulsion on the front wheels. It has all the makings to be the next big thing in the auto industry, and it takes select members of the team around the country to conferences to talk about their work. “Most of the big innovations happen outside of the mainstream,” says Hauger, who recently traveled to Maine with Hill and a few other students for one such trip.

During almost every competition and conference the team attends, the Automotive Academy students are always the youngest. “We’ve been the only high school in the world accepted into competitions,” says Hauger.

Hill and his teammates, most of whom aren’t even old enough to drive the cars they build, have competed against colleges, start-up companies and a handful of multi-national corporations in such contests as the GE Ecomagination Competition, which challenges businesses, entrepreneurs, innovators and students to share their best ideas on how to build the next generation power grid.

In September, members of the team traveled to Washington, D.C., for the Progressive Automotive X PRIZE awards ceremony. While they didn’t win the global innovation competition, they did head to the White House, where President Obama singled them out in a speech as high school students with “the kind of spirit and ingenuity we want to foster.” Said Obama: “They went toe to toe with car companies. They went against big-name universities, well-funded rivals. They held their own.”

Not bad for kids with no formal engineering background. “The point is to engage students,” says Hauger, “and the result is that they do better in school.” They also do their own fundraising to pay for expensive car parts and trips. The students are readying for a once-in-a-lifetime trip to NASA (the National Aeronautics and Space Administration) in Cape Canaveral, Florida where they will get an inside look at the returning space shuttle.

For Hill, who says he wants to get into music production when he graduates next year, the hard work pays off. “The benefit is that what we do on the team really does change how we function as students,” he says. “It changes your perspective about education. I feel like we’re starting a whole new conversation about what urban education can be.”

And even though the cars the teens build are very cool by anyone’s account, Hill adds that it is not really about the product. “It’s more about what we’re doing for the world. It’s for Philly, our city and our school. It’s important for a lot of young people to find a place in school or in the community where you can really do something that affects people in a positive way.”