On January 5, President Barack Obama announced the Summer Jobs+ program to help get more teens hired for summer jobs. The Obama administration’s commitment to youth employment will help at least some of the estimated 1.4 million young Americans who are out of work find jobs this summer – and learn valuable skills for a lifetime in the job market. …Read More 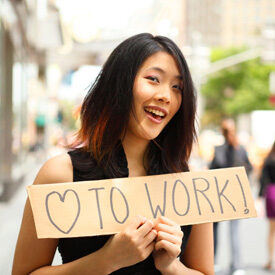 Last summer Knowledge@Wharton High School wrote about Darrion Dixon, a 20-year-old who had just been accepted into UPS’s Louisville, Ky., summer jobs program, an initiative supported by the U.S. Department of Labor’s Summer Jobs USA campaign. Dixon had ambitions of growing his career with UPS and possibly becoming one of the company’s next success stories. “I plan on giving all I got to this job,” he said. “I’ll try my best and give 110%.”

Before he found a job with UPS, Dixon represented what President Barack Obama referred to this week as an “Opportunity Youth,” a young unemployed person with “untapped potential to bring to the nation.” In recent years, the number of so-called “Opportunity Youth” has been growing. Teen unemployment – representing people ages 16 to 24 who are out of work — has continued to rise in the past three years, topping 30% in many states.

Over 20% for Three Years

This week, the White House vowed to tackle youth unemployment head-on through its Summer Jobs+ program, a call to action for businesses, non-profits and government to work together to provide pathways to employment for low-income and out-of-work youth in the summer of 2012. “America’s young people face record unemployment, and we need to do everything we can to make sure they’ve got the opportunity to earn the skills and a work ethic that come with a job,” said President Obama during Thursday’s announcement. “It’s important for their future, and for America’s.” The program looks to create nearly 180,000 employment opportunities for low-income youth in the summer of 2012, with a goal of reaching 250,000 employment opportunities by the start of summer, at least 100,000 of which will be placements in paid jobs and internships. AT&T, Gap, the Department of the Interior and Jamba Juice are among the companies and agencies that have committed to hire youth.

While the Obama administration’s commitment to youth employment will help at least some of the estimated 1.4 million young Americans who are out of work find jobs this summer, it is significant in other ways. “It suggests that Washington and the White House have taken notice of what is going on in the teen job market,” says Michael Saltsman, a research fellow at the Employment Policies Institute in Washington, D.C. who is an expert on entry-level employment. “So much focus this past year has been on the overall unemployment rate, but we’ve lost focus on the high unemployment rate for young people. The country’s teen unemployment rate has been over 20% for three years. We haven’t ever seen that before. Essentially, it means that somebody in high school has almost completed a full cycle of school without knowing anything other than a job market where it is very difficult to find work. It’s a new paradigm for this generation.” The economic recession has forced employers to eliminate teen-specific positions, adds Saltsman, and has resulted in older people competing for jobs once filled by teens.

Get Your Hands Dirty

The issue of teen joblessness has a much more far-reaching impact than less money to spend at the mall. On-the-job experience prepares young people for the workforce through what the White House referred to this week as “life skills” and “work skills.” “It is the set of skills you learn on the job that you don’t necessarily pick up in high school,” notes Saltsman. “It’s what you learn from working with a manager, dealing with customers, having to show up for work every day. These are the skills that make a teen more valuable down the line.” Saltsman cites a study out of the University of North Carolina-Greensboro concluding that high school seniors employed 20 hours a week were expected to earn hourly wages 11% higher than their counterparts six to nine years later.

What’s more, the vast majority of young people who start out in a job earning minimum wage tend to get a raise in their first one to 12 months on the job. “Young people have a quick learning curve and earning potential, but it does require being willing to get in there and get your hands dirty,” says Saltsman. “You may not like what you have to do the first few months of a job, but keep in mind that it is working toward a higher wage and that next better job.” Countless big-time CEOs recall the work ethic they learned from their first jobs as teens flipping burgers or stocking grocery shelves. UPS CEO Scott Davis picked pears in Medford, Ore., for $1.25 an hour. Davis reportedly earned a total compensation of $9.5 million in 2010.

Saltsman urges teens not to procrastinate with their summer job search. “Teens need to be in the mindset to search for their summer employment earlier. There is going to be more competition for these jobs,” he suggests, adding that many applications will be coming through the door and sitting on the hiring manager’s desk. “Making an in-person follow up visit and dressing nicely for your follow up could help set you apart from other people who are just turning in an application and hoping they get a call back.”

Why Investors Diversify: Spreading Your Wealth Across Assets, Industries and Countries