Teamwork with a Marshmallow on Top

A group of high school students had fun on a Saturday morning in February playing with a few sticks of spaghetti, some tape, string and a marshmallow. Discover what they learned about collaboration and why teamwork is so important to your future. …Read More 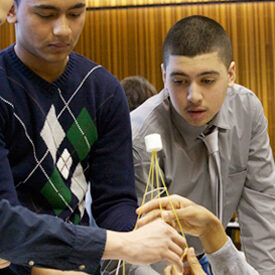 It is early on a Saturday morning in February, and a focused team of students, thrown together from different high schools in Philadelphia, is strategizing, designing and nervously watching the clock. The task? Build the tallest free-standing structure in the room in 18 minutes using only what they have been given in a paper bag: 20 sticks of spaghetti, a yard of tape, a yard of string and a marshmallow, which must top the construction.

“Put the tape on the bottom and we can stick the spaghetti to it,” says Amber Brown, 18, and a senior at Motivation High School. “We just can’t tape the spaghetti to the desk,” she notes, glancing around the room at three other teams of students working feverishly on their own spaghetti designs.

“I was thinking we could poke holes in the tape and stick the spaghetti through them,” suggests Danny Varughese, a 16-year-old junior from Central High School.

“I made a hole, but it’s not working; it’s not holding,” says Cristal Rosado, 17, from Bodine High School. “Try the tape on this part to see if it will stay,” she adds, leaning sticks of spaghetti together in a triangular shape.

“We should probably build another triangle, because we need points to support the marshmallow,” says Ivann Anderson, 17, also from Bodine.

As the buzzer sounds, the team’s architectural creation topples to the floor and settles on its side, marshmallow still skewered atop the spaghetti spears. Despite their valiant attempts at pasta innovation, the team is disqualified for its fallen finish. “If we did this again, I think I would listen better to my teammates,” notes Anderson. “Through the process, I felt like one idea wouldn’t work, and then when I listened, our structure stabilized. But then it fell. It’s a learning process, and it’s about working together.”

Anderson and all the high school students participating in a Leadership Day at the Wharton School on February 11 tackled the Marshmallow Challenge, a design exercise popularized most recently by Tom Wujec, a fellow at Autodesk, a technology company. The Challenge, which is described in detail in a TED talk (free short video talks on different subjects given by some of the world’s greatest thinkers), is meant to encourage teams to better understand the nature of collaboration.

Collaboration is teamwork, or working together to achieve a goal. The ability to communicate with a team is a critically important skill in today’s workplace, because exchanging ideas can foster creative and innovative thinking. When people work well together, the sum is often greater than the parts. “Teamwork is all about building relationships and working together,” notes Larry Lipman, a team building success coach in Atlanta, Ga., who runs the company Fun Team Building to build collaboration skills among teachers and employees. “The verbs that are inherent in my definition include: supporting, trusting, communicating, sharing, asking, collaborating, respecting, coaching, being coached and laughing a lot!”

Collaboration requires strong communication skills, but also the ability to listen and embrace other points of view from team members who sometimes have very different personalities. This becomes particularly important in today’s technology-driven world where many people interact regularly with their computers and smart phones, and not as often face-to-face with other people. “In most walks of life, you can’t operate alone. You need to learn how to communicate, interact, work and interface with others,” says Lara Azzam, president of Team Business, a company that runs business simulations at high schools around the world where teams of students run their own businesses in competition with each other. “The more effective you are at doing those things, the more successful you will be at achieving your end goal. Our program clearly demonstrates that the better a group of students works as a team, the stronger their business results.”

So what happens when the marshmallow topples? As high school students Brown, Varughese, Rosado and Anderson discovered, collaboration does not always guarantee success – especially when fluffy white confection is involved. The Marshmallow Challenge, completed by CEOs and business teams around the world, has valuable lessons about the nature of collaboration, suggests Wujec in his TED talk. “Normally, people begin by orienting themselves to the task. They talk about it, they figure out what it’s going to look like, they jockey for power, they sketch. They assemble the sticks into ever-growing structures, and just as they’re running out of time, someone picks up the marshmallow and gingerly puts it on top. They stand back and admire their work, or the marshmallow causes the entire structure to buckle and collapse.”

Recent kindergarten graduates are among the most successful Marshmallow Challenge competitors because, as Wujec puts it, “None of the kids spend any time trying to be CEO of Spaghetti, Inc. They don’t jockey for power.” Instead, they start with the marshmallow and build prototypes, or models that test the concept of spaghetti scaffolding with a marshmallow on top. Says Wujec: “With each version, they get instant feedback about what works and what doesn’t.” This iterative process – involving rounds of analysis to arrive at a decision – can be a valuable component of successful collaboration.

Teamwork, adds Lipman, is a chance to learn new insights and perspectives from people with a diverse set of skills. “One of the most important aspects of teamwork is asking for help,” he says. “That is not easy to do. To me, asking for help is a strength. People love to be needed. And that concept allows teamwork to blossom.”

What does the iterative process refer to in collaboration?

What do you see as the most important qualities of a strong team?

Have you ever done the Marshmallow Challenge? Share your story with other teens either in the comment section of this story or on KWHS’s Facebook page at http://www.facebook.com/whartonhs.

A Platform for Selling Art and Pursuing Dreams