It's never too early to start learning about student loans. The average college senior graduated with $29,400 in student debt last year, and the number is projected to rise by a staggering 6% per year. On a starting salary faced with real-world expenses, it can take years to make that debt disappear. KWHS talks with two young personal-finance bloggers who share insights and reflections about their determined journeys to be debt-free. …Read More 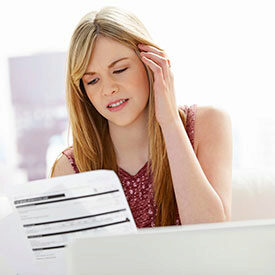 Did you hear the news this week? A report from Complete College America, a nonprofit group based in Indianapolis, Indiana, suggests that most students at American public colleges (tuition at public universities is typically lower than at private colleges because they are often state-funded) don’t graduate in four years. According to the study, nationwide, only 50 of more than 580 public four-year institutions graduate a majority of their full-time students on time. More time in college means more money put toward yearly tuition bills — and for some, even larger student loans that they must pay off when they leave campus for the real world.

This type of report makes Zina Kumok stand up and take notice. Kumok, 26, is a graduate of Indiana University, a public college that also happens to be in Indiana, from where this report was generated. But the coincidences end there. The mere thought of having to extend her four-year college stay would have sent Kumok into a financial tailspin. When she graduated in 2011 with a journalism degree, she was saddled with $28,000 worth of student-loan debt that she had to pay off on her own, and on the starting salary of a journalist — about $28,000 a year.

Kumok took out the loans as an 18-year-old in order to supplement the $15,000 a year that her parents agreed to pay for her higher education tuition. She now readily admits that she didn’t know what she was getting into. “I told myself I wouldn’t take out more than $30,000 in loans because I didn’t want to take out any more than my starting salary would be after college,” notes Kumok. “But nobody told me that when you make $30,000 starting out, this is how much your monthly salary will be and this is how much your student loan payment will be. I ended up paying $350 a month for my minimum payment, and when you’re making $28,000 that’s a really big chunk. I wish prospective college students understood a bit better what their life will look like after college.”

In December 2012, Kumok decided to do something about that – and about her own debt. She launched an online blog, “Debt Free After Three,” in which she regularly posts personal-finance reflections and anecdotes about her journey to pay off her sizable student-loan debt in only three years. Typically, it would take nine years or longer, and cost thousands of more dollars in accrued interest.

On November 18, 2014, Kumok was victorious. Her last loan payment cleared, and she was debt-free in even less than three. How did she do it? Says Kumok: “There are only two ways to pay off any kind of debt. Spend less or make more. Do one or the other — or if you’re really desperate, do both.”

While Kumok’s blog kept her accountable for her financial goals (she attracted a following of other debt-laden readers), it also introduced her to the supportive personal-finance blogosphere and other college grads buckling under the weight of their student loans, people like Melanie Lockert. Lockert, who writes “Dear Debt,” a blog about breaking up with debt, accumulated a total of $81,000 in student-loan debt as a theater arts undergraduate student at California State University, Long Branch and a graduate student at New York University in New York City. To date, Lockert, 30, has paid off $33,000 in about three-and-a-half years, and is working hard toward reducing that balance as quickly as possible. A key strategy? Moving from NYC to Portland, Oregon a few years back to live with her partner and escape the high-priced New York lifestyle.

Both Kumok and Lockert have gathered some valuable insights during their debt-reduction journeys – all intel that they wish their 17-year-old selves had known when they were signing on the student-loan dotted lines. Here are their top five highlights:

What were some of the mistakes that Zina Kumok and Melanie Lockert made when taking out and dealing with their student loans?

Spend some time exploring “Debt Free After Three” and “Dear Debt” further. How has social media played a role in the lives of these two women and their struggles to become debt-free? What does that tell you about the power of social media?

Mo Fall Dreams of Playing Basketball for an African League