‘Creating a Fair Playing Field’: What’s Behind the SAT Redesign

During junior year of high school, three little letters become very powerful: SAT. Recent changes to the college entrance exams will change the content of the tests and will also affect the expanding test-preparation industry. KWHS takes a look at the SAT – specifically, its accessibility, affordability and authenticity as a test of knowledge. …Read More 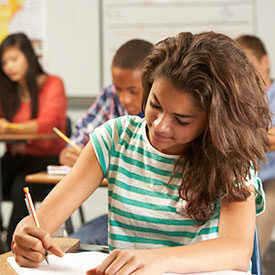 News flash: The SATs, the infamous exams taken in the last few years of high school that are a key determinant to college acceptance, are getting a major facelift that will feature welcome changes for most college-bound teens. “I think it will be easier for the juniors in 2016. I’ve seen [the reports] online and heard it from classmates,” says 16-year-old Ashlie Jow, a junior at Sacred Heart Cathedral Preparatory in San Francisco, Calif.

Beginning in April 2016, high school students will sit down to a SAT exam that is graded on a 1,600-point scale instead of 2,400 points, that has an optional essay instead of the required writing segment, and that assesses no penalties for wrong answers. Each exam will also include analyses of passages from historical documents, like the Declaration of Independence and Martin Luther King’s “I Have a Dream” speech. The famously flowery vocabulary words will not be on the test anymore; instead, the focus will be on words often used in colleges and jobs, like “empirical” and “synthesis.” As Jow puts it, “We spend a lot of time memorizing definitions of words that wouldn’t come up in everyday conversations.”

Since 2005, when the SATs were last changed from the old 1,600-point system with no writing requirement, the number of test-takers has steadily declined. Students are opting to take the rival ACT instead. Some experts have said the revamp is to regain the SAT’s foothold in the college application process.

Affordability is a critical aspect of the announced changes. Free SAT test preparation courses will be offered from the Khan Academy, a not-for-profit organization, to give more access opportunities to all students, regardless of their economic backgrounds. Currently, 10 million students worldwide log onto the Khan Academy website to study a wide range of subjects, from chemistry to art history, through video tutorials and interactive online exams — all for free. The Khan Academy is working in partnership with the College Board, an association that develops and administers the SAT and other standardized tests, and is already offering free practice exams for the current SATs. “Online tutoring from the Khan Academy would be a great resource,” says Jow, who has used the website to study chemistry, math and science. Founder Sal Khan started the company when he used YouTube to tutor his teenage cousins in New Orleans while working as a hedge fund manager in Boston.

Many have argued that a robust test-prep culture has given unfair advantage to students who have the means to afford private tutors and rigorous weekend courses. “We’re committed to addressing one of the greatest inequities that surround college entrance exams, namely the culture and practice of high-priced test preparation,” says Carly Lindauer, senior director at the College Board.

Studying for the SATs has spawned a lucrative industry devoted to mastering the test that many colleges require when kids submit their applications. Companies can charge as much as $3,000 to help teens improve their scores, with some organizations promising a 400-point increase.

Jow spent six hours every weekend throughout the summer attending a SAT course, which cost $1,200. She also took a SAT course at school and bought a Kaplan SAT prep book. “The SATs put pressure on students and parents. Many have to pay a lot of money to get into the best SAT test prep course,” says Jow.

Jalen Griffin, a senior at Wissahickon High School in Ambler, Pa., went to a $300 community college course with 40 other kids twice a week to brush up. However, he says it was minimal compared to friends who went to a special academy every single day in the summer, except Saturdays, or those who could afford to pay private SAT tutors to come to their homes. “What are [less fortunate] kids going to study? They can’t afford the books that cost $60 and can’t do courses that other kids get to do,” notes Griffin.

Rochelle Rivera, a junior at the William Bodine High School for International Affairs in Philadelphia, describes the Khan Academy’s decision to offer free SAT test prep as a once-in-a-lifetime chance. “I would proudly and enthusiastically take advantage of this opportunity,” she notes. “Some students of different socio-economic backgrounds are limited by who they are and where they come from. Economic and social obstacles can get in the way of a student’s dreams, but with free SAT prep, you can focus more on the bigger picture without being put down by such obstacles. It is a great idea that Khan Academy supports students and their visions.”

In addition, Lindauer says, “All students who have qualified for SAT fee waivers will now directly receive four college application fee waivers to simplify the process.” This change is part of the College Board’s Access to Opportunity Program to encourage low-income, underrepresented teenagers to pursue post-secondary education.

‘No Longer about Tricks’

The SAT changes are also meant to restore the original intent of the exam – testing student knowledge rather than their ability to outsmart the system. Griffin says that his SAT test-prep course focused on test-taking strategies and not much on curriculum. “It was about how to eliminate answers,” he says. “It was a joke that the SATs were supposed to measure how intellectual you were.”

When David Coleman, president of the College Board, announced the changes in a video statement with Khan, he said, “This exam should be about merit. It’s no longer about tricks.” Khan added: “It’s no longer about gaming the system. It’s really about getting the core fundamental ideas so not only will you do well on the SATs and other tests, you’ll actually be prepared for college.” The redesigned SATs will also focus more on what is taught to students in high school classrooms, drawing from source texts like science, history and social studies.

Though Griffin scored above the average on his SATs, he was still disappointed. Because he didn’t score phenomenally well, he has not qualified for as many scholarships as he needs when he goes to the University of San Francisco in the fall. The monetary level of his golf athletic scholarship is on a sliding scale, based on his SATs and academic record. SAT scores can have a trickle-down effect, hurting students who can’t afford to pay full tuition. When kids can’t pay for the most rigorous SAT test-prep curriculum, they may hurt their chances of getting the best scores they can, which in turn prevents them from getting much-needed scholarships for college. All the more reason, notes Griffin, for an SAT overhaul. “They’ve finally wised up about it.” The revamp will “create a fair playing field, and that should help a lot.”

What do you think? Is the SAT overhaul a good idea in terms of the academic changes and test-prep access?

What is your own experience with SAT test prep? What resources have you used and paid for? Do you feel the College Board’s relationship with the Khan Academy will level the playing field?

What does Sal Khan mean when he says, “It’s no longer about gaming the system?” Do you see this as a valuable change to the SAT exam? Why or why not?

3 comments on “‘Creating a Fair Playing Field’: What’s Behind the SAT Redesign”