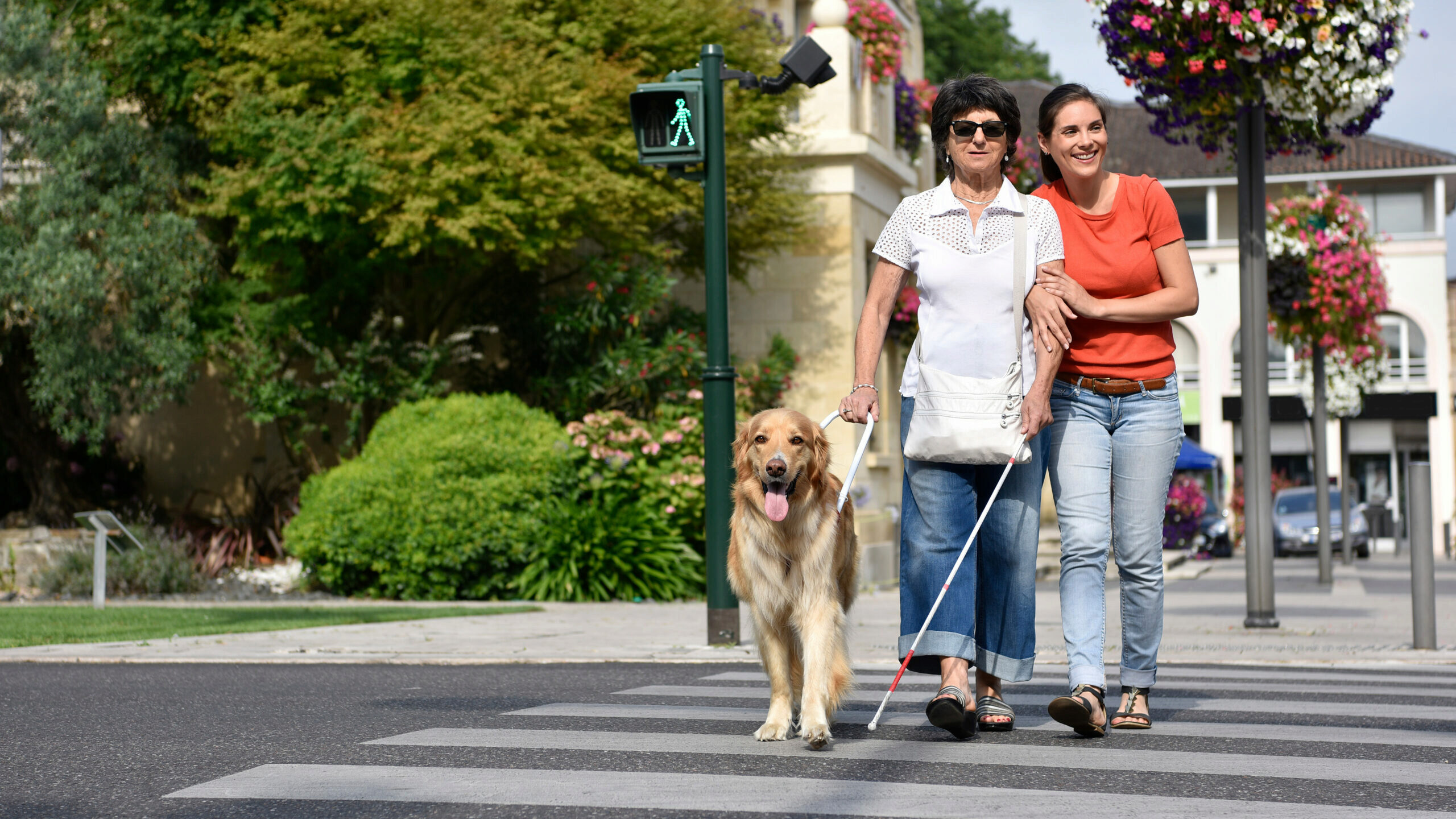 For Narciso Soto, a nineteen-year old native of Spain, an item in the newspaper served as inspiration for the prototype of his innovative cane for the blind. Known as the B-Compass, his invention won him the ‘Innova Ciencia’ award in a 2015 contest sponsored by FECYT, the Spanish Foundation for Science and Technology.

His award-winning cane transmits an electronic vibration in its handle, warning its user of the presence of obstacles, including specifications about their height; thus enabling blind people to deal with potential stumbling blocks and proceed with greater security. This also helps them to lessen their dependence on guide dogs in locations that are less familiar to them. The closer the user comes to those obstacles, the greater the vibration. In developing this product, Soto worked with advisors at ONCE, the Spanish national organization of the blind. Thanks to the availability of free software and 3-D printing devices, Soto was able to lower the production cost of the canes to only 75 U.S. dollars per unit.

Today, Soto’s project has come to a standstill. In order to commercialize his idea, he needs to find a partner who has the technical know-how that he lacks to refine his prototype, which is an early sample or model of an invention that helps innovators test its functionality. Even so, Soto has thought long and hard about the best approach for product development, even if you are not surrounded by a network of business people or have access to resources. KWHS spoke with Soto to better understand his business idea and why he feels that the best prototypes emerge when you share your ideas in hopes of improving them.

An edited version of that interview appears below.

Knowledge@Wharton High School (KWHS): How old were you when your interest in innovation and science emerged?

Narciso Soto: This all started for me when I completed Spain’s compulsory secondary education curriculum [required for students aged 11 to 16.] I had a lot of good science teachers, with whom I undertook many projects. They proposed scholarships and scientific programs for me. I have especially fond memories of the scientific scholarship campus of the FECYT, the Spanish Foundation for Science and Technology. There, I spent a week learning about micro-robotics at what is now my university, Carlos III University in Madrid (known for short as the UC3M. That’s where I got into the little world of free software and hardware, 3-D printers, and so forth. That’s the world that I’m still hooked on today.

KWHS: How did you come up with the idea of creating an electronic cane? Did you have a particular motivation for doing so before you decided to undertake this project?

Soto: For this project, there was no specific motivation. Nevertheless, I am always going to attempt to investigate the needs and successes of the moment. At the time, there was quite a lot of commotion in the media about the attack of a guide dog on a pedestrian. That’s when I got to work on the B-Compass.

KWHS: How is this innovation different from similar technologies? And how can this difference help people who use this cane?

Soto: What makes this different, in reality, is that its functioning is based on helping the blind person on the street; not so much with respect to guarding him, but more with avoiding missteps and giving him the sort of added information that he cannot obtain with a conventional cane. For example, the guidance systems that currently exist are usually based on GPS technology, which has a standard deviation of some ten meters. For those people who have no problems with their vision, this does not mean any drawbacks, but for a blind person this can mean falling down on the street. The B-Compass tries to solve some of these problems by giving the blind person information, right on the spot, about what surrounds them.

Soto: For the moment, I have not thought about commercializing it. I have achieved [developing] a prototype based on ultrasound. To do that safely, you should employ other technologies such as artificial vision, but I don’t have the knowledge I need to do that, and I’m not going to get it in college by studying aerospace engineering. To overcome that, I would have to work with someone specialized in that area, but it is very hard to find people who are ready to work on this type of project, while simultaneously pursuing their career path of study.

KWHS: How would you define the key steps and stages for developing a prototype like yours, which is borne from personal interest and passion?

Soto: The first stage, of course, is to have an idea. It must be something relevant and useful, and something that you are ready to work on. Because, ultimately, what you’ll be making is a project that makes advances in the directions you set out to pursue. In my case, I began to work on B-Compass in the second year of my bachelor’s program, and I didn’t even know what college degree I was going to choose. This invention might even have become my end-of-grade work.

The second stage is to try something state-of-the-art. Nowadays, it is very hard to find something that no one else has ever worked on. By acquiring that sort of information [about a potential project], you can save yourself a great deal of time. Saving time by making some subtle changes [in others’ past initiatives], you can wind up avoiding those ideas that have already been worked out and marketed. Or, on the other hand, you can use what has already been done [in this area], perhaps from different sources and with different goals, to achieve something new and (you hope) better. In reality, this may be the most complicated and important task, and how to act in each situation is something that you have to decide for yourself.

The third stage is to have fun tinkering around with things. Nowadays, we have access to a great deal of free software and hardware. And thanks to the Internet, we can get it in very little time, and for quite a low price, even if we do not have a distributor near by. This is a pleasant opportunity for us to try things, to make mistakes, to improve everything, and to learn on the job. Maybe this is not the simplest part, but it is a lot of fun!

In the final stage, you share ideas. If we didn’t do that we would be merely ‘geeks’ who like the smell of tin. It is not simply a question of getting recognition, which is great. It’s also that your idea can wind up in the hands of someone else who can continue to work on it and improve it. That way, little by little, you go on creating something much bigger than what any single person could do simply by working alone. That’s the way many free software programs have been created, such as Linux and FreeCad, which is one of the programs I used in developing B-Compass, by the way.

KWHS: What recommendations would you give someone who has some brilliant innovation in mind, but who does not know how to begin to develop it?

Soto: In the first place, you need to have the desire and the drive. If you have an idea, the first person you need to convince is yourself. If you don’t manage to do that, you won’t win over anyone else. If you’ve got all that going for you, it is a lot simpler nowadays to move your idea forward. It seems that the do-it-yourself movement is getting bigger and bigger in the world, following the arrival of 3-D printers. That means that there is an extremely large amount of information available to supplement, in great measure, for any lack of knowledge.

Thanks to free software, you can design almost anything in your own home. It is only a matter of looking for and finding the right program that meets your needs. Free hardware programs such as Arduino and their communities of people take on the burden of supplying the great majority of the needs that you can have in the field of electronics and programming. There are a great many alternatives in what comes down to, as I said at the start, having the desire and doing a lot of the deep diving until you find the right tools you need. After that, it is a question of trying things out until you figure out what works. It is a slow process that is sometimes frustrating, but it is worth it.

Who is Narciso Soto? What is preventing him from commercializing his idea?

What is Arduino? Who belongs to the “Arduino community?” How do tools like this help people like Soto advance their ideas? Have you used a similar resource? Share your story in the comments section of this article.

The KWHS business journal has a Spanish edition and therefore publishes stories of young Spanish entrepreneurs from time to time. Using the “Related KWHS Stories” tab in the side toolbar of this story, explore some of the past KWHS articles about Spanish entrepreneurs. Whom do you find most interesting? What are some common themes among these articles? Can you glean any insights about Spanish culture?

Red Velvet Revolution: The Rise of the Cupcake Entrepreneur