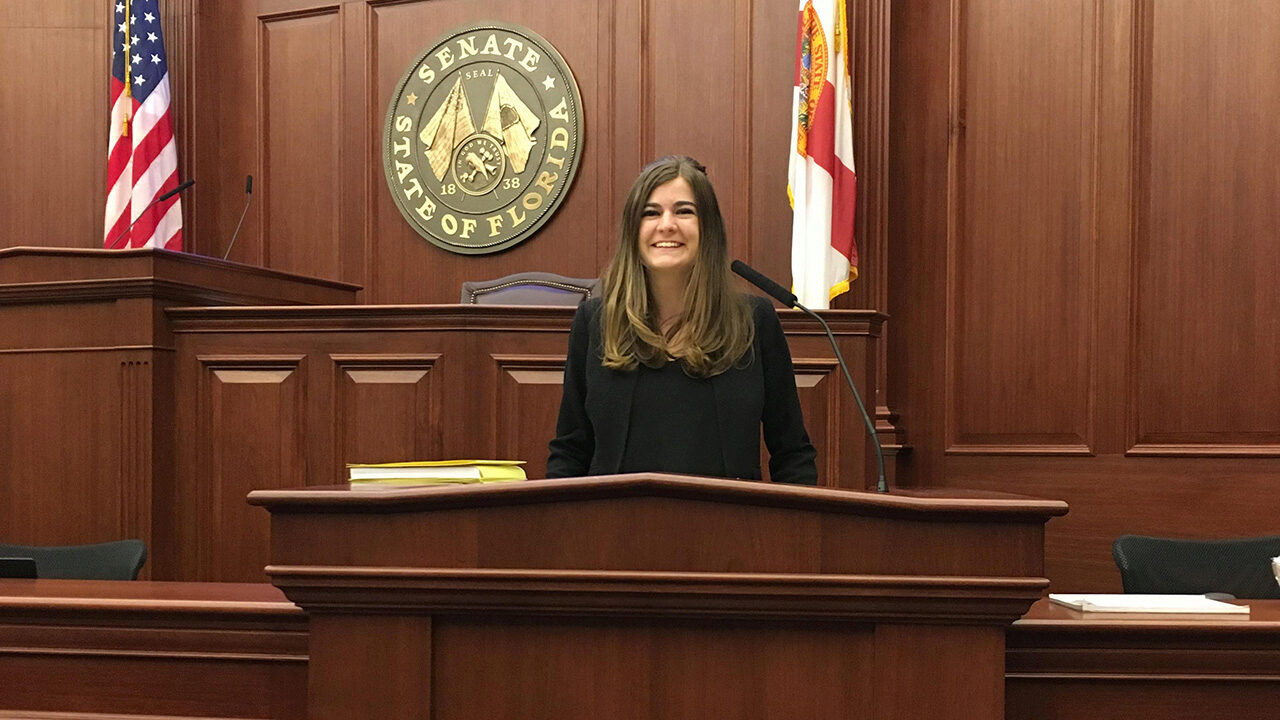 Fiorella Riccobono first contributed to Knowledge@Wharton High School back in 2015, when she was interviewed for her high school social entrepreneurship project helping coffee bean farmers in Northwest Haiti. She has stayed in touch ever since, sharing insights from her college and social-awareness experiences at Florida State University. You can check out Riccobono’s KWHS contributions in the Related KWHS Stories tab accompanying this article.

As always, we appreciated hearing from Riccobono this week, when she reached out to tell us about her new job (she graduated in December) and share her perspective on a very personal topic: how her journey learning to speak English has influenced her life and career decisions.

In this personal essay, she expresses why she hopes that “more people in our society, especially in today’s political climate, analyze their perceptions of disadvantage and accept that qualities like language “barriers” can in fact be personal strengths.”

I vividly remember the moment when I became a shy girl and developed a profound fear of public speaking. I was in my pre-k classroom sitting in a big circle of 4-year-olds, when our teacher asked us to share what we had eaten for breakfast. My parents had immigrated to Fort Lauderdale, Florida, U.S. from Venezuela shortly before my brother and I were born, and we only spoke Spanish at home. However, this was my second year enrolled in school in Davie, Florida, so I had picked up enough English to understand the question. But I was still learning. I raised my hand and responded “cereal con leche.” My visibly angry teacher asked me again and again to repeat my answer, and I couldn’t understand why.

Eighteen years later, I still recall the shame of being scolded for my inability to communicate in the appropriate way – in this case, fully in English. Luckily, my teacher’s aide spoke Spanish and translated that I was saying “cereal with milk.” But at that point, the damage had been done. I was wounded and crying. I remember thinking to myself that I wouldn’t speak in class unless I absolutely had to. It was an overwhelming feeling of inadequacy; something a four-year-old girl should never experience.

That feeling stayed with me. In high school, I would choose to be absent on days when I knew I had to present projects to the class. My eyes would water when I had to speak in front of my classmates, my voice would shake, and so would my legs.

This story marks the start of my improbable triumph.

My favorite author, Malcom Gladwell, poses an interesting question: “Why do we automatically assume that someone who is smaller or poorer or less skilled is necessarily at a disadvantage?” I believe that we have a very limited definition of what constitutes an advantage.

Now, at the age of 22, a recent graduate of Florida State University and a new employee of the Florida Senate, I am very clear on my own advantages. Being the daughter of two Venezuelan immigrants made me the professional woman I am today, and that identity has been a driving factor in my success.

Much of the credit goes to my so-called language “barrier” and struggle with “broken” English. During my years of learning English, my mom and I would sit down together to do my homework. When I was tired of studying, and I didn’t want to practice spelling out any more words, my mom would softly and persuasively say, “Dale Fiore, otro treinta minutos, porque cuando tu aprendes, yo aprendo tambien,” which translates to: “Let’s study another half hour, Fiore, because when you learn, I learn too.”

That phrase kept me going. We would sit there at the table laughing hysterically as we butchered the words we were spelling aloud to each other. When test day came, I would remember the mistakes we made, because they were so funny to me, and that helped me memorize the correct spelling. The way we had to study turned spelling and vocabulary tests into a fun game. I began to appreciate a certain joy and fulfillment of studying for the sake of knowledge, not to overcome an inadequacy, and I also had the deep satisfaction of watching my mom learn English.

Conventional thought suggests that if you live in the U.S. you should learn English, and we eventually did. But the truth of the matter is that not knowing English made me a better student. It meant that I had to work harder and couldn’t lose focus in class. I paid close attention to how people spoke and pronounced words. When I was tired and wanted to stop, I had to keep studying. Many would argue that my inability to fluently speak English in my childhood was a weakness, when in fact it turned out to be one of my greatest strengths.

While I still hold onto some of the feelings I had all those years ago in my pre-k classroom, I have grown to embrace my Venezuelan heritage and language as motivations for my achievements in the U.S. The fact that I am not a native English speaker has made me more empathetic. It has helped me truly understand why diversity of thought is such a strength in the workplace, and, ironically, has made me a far more effective communicator.

I majored in finance, economics, and social entrepreneurship at Florida State, and graduated a semester early in December 2018. I am now the reading clerk for the 2019 session of the Florida Senate. Our state constitution requires senators to read bills three times before voting on them. I stand at the podium and read these documents aloud for the 60 days that the Senate is in session, navigating the language that could ultimately become Florida law. That one-time shy, silent little girl actually pursued and landed a job that now requires me to regularly stand in front of 40 state senators and read proposed legislation – in English.

I also speak Spanish every day, with family and friends. My college roommate and best friend is from Mexico, so we speak to each other in Spanish. I am bilingual in my professional life, as well. Just this week, the Florida Senate phones were blowing up with citizens supporting or condoning a controversial bill that entered committee. This specific bill prompted lots of calls from Spanish speakers and I was the only person on staff who could speak Spanish. So I answered the phones and spoke with the Spanish citizens, communicating about their opinions on this piece of legislation. I helped the voices of non-English-speaking citizens be heard.

I see how speaking English as a second language actually adds to the richness of this country. As a Venezuelan immigrant, I grew up forcing myself into situations where I had no choice but to confront my fears, and I would do it again and again until that specific situation no longer made me uncomfortable. I have contributed deeply to my school and now my work communities because my “otherness” sparked my intellectual curiosity and my desire to work that much harder to achieve my personal goals.

My hope is that more people in our society, especially in today’s political climate, analyze their perceptions of disadvantage and accept that qualities like language “barriers” can in fact be personal strengths that open up entire worlds of opportunity and accomplishment.

To the students who relate to my experiences and who may be struggling with their inability or even lack of desire to learn English, I ask you to shift your perception and embrace the opportunity in your challenge. I ask you to consider how you can spin this perceived weakness and draw energy from it to become a stronger student, friend, and contributing member to society. Don’t accept the notion that you are disadvantaged. Learning English and being able to effectively communicate with your peers is rewarding. More importantly, how you speak, complete with your thick, beautiful accent, is an advantage and an asset, not an inadequacy you must overcome.

Fiorella Riccobono says, “My hope is that more people in our society, especially in today’s political climate, analyze their perceptions of disadvantage.” What does she mean by this?

How would you describe Fiorella’s “improbable triumph?”

Does Fiorella’s story resonate with you? Can you relate to some of her struggles learning the English language and how that has helped to define her course? Why or why not?

Future of the Business World: A Lemonade Stand Inspires a Finance Project in Colombia