Played with your avatar today? Laura Lantz sure has. Lantz, a game designer in Pittsburgh, stays immersed in a three-dimensional world where users communicate, play games and interact online in virtual environments that she helps to create. She offers a peek into her real world of virtual reality game designing. …Read More 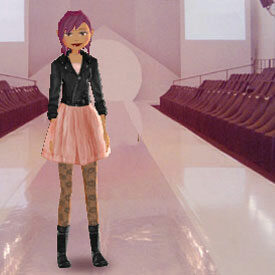 Call it the allure of the avatar. Judith Rothman-Snyder, a 16-year-old in Philadelphia, has been experimenting with virtual reality games and applications for years. “I think the attraction is that people don’t have to be who they really are,” she says. “They can create an avatar to look how they wish they looked or to meet people and act completely different.”

Like Judith, Laura Lantz loved the virtual reality life as a teen, so much so that she now works as an independent multimedia designer and developer for Schell Games in Pittsburgh. Lantz stays immersed in a three-dimensional world where users communicate, play games and interact online in virtual environments that she helps to create.

Yes, Gaming Is a Real Field of Study

Inspired by applications like Second Life (secondlife.com) and The Sims (thesims3.com), Lantz’s games all tend to feature user experiences that allow people to create personal avatars, play games, show off hot dance moves, shop, host parties and even donate to their favorite charities. Most recently, she led the design on Dance Beat, a new game from Hangout Industries in Boston, the same company that also launched Fashion City and Superstar City in 2009.

Hangout lets users connect to virtual worlds by downloading gaming apps directly to computers and becoming fans on Facebook. There are multiple levels of interaction both on the Hangout site itself and via Facebook where users can chat and join in the fun. “The gaming business has grown dramatically on Facebook,” says Pano Anthos, CEO of Hangout Industries. “This is a way for kids to basically leverage Facebook social apps for a higher level of engagement.”

When Lantz first started working on Dance Beat, she wanted to combine elements of online chatting with gaming. “It was the first Facebook game I worked on,” she says, “You’re always trying to achieve a bunch of different goals with a game like Dance Beat. You want the game to be fun to play with other people — whether you’re hanging out with a friend or a bunch of people you’ve never talked to before — and also fun to play solo if nobody else is around.”

During her undergrad years at Carnegie Mellon University College of Fine Art in Pittsburgh, Lantz began designing several virtual reality games like To Be a Yoga Master, a game that lets users contort their virtual bodies to fit into virtual walls, and Moment of Flight, an intense 30-minute dance game in which users move up and across steep walls.

As a game designer, “I don’t do any actual programming, but some designers do have programming backgrounds, which can be helpful when working with programmers because it gives the designer a shared vocabulary and an understanding of what is technically easy and difficult to achieve,” says Lantz, who lives in Pittsburgh and works with a team of other gamers, including producers, programmers, sound designers and 2D artists. “In my previous work as a multimedia developer, I did a lot of web design and scripting, and that background has carried over.” While working on a project, Lantz’s day-to-day involves lots of decision-making, communication with the team and tweaking the way the game works in response to playtesting.

Lantz has worked especially hard at creating ways to make new users interested in joining the Dance Beat game — both through computer programming techniques and an eye for colorful, appealing design that sets her work apart from others. “You want it to be challenging and varied enough that people will play over and over again without getting bored,” says Lantz, whose favorite feature of Dance Beat is that anyone can join a dance. “You’ll be chatting with people in one of Hangout’s rooms and then suddenly some music starts and someone starts dancing,” she says. “Then more and more people are dancing around and you can dance with them — everyone gets bigger bonuses as more people dance together in a group.”

Lantz wants users to feel comfortable no matter how new or experienced they may be. “People of different skill levels can dance together with no problem,” Lantz notes. “Whenever you start a dance, there’s a good chance that other people will dance with you, even if you’ve never met before.”

A good way to get started down the gaming career path is to design games,” says Lantz. “You can create and test your own games even if you don’t have the programming knowledge to create computer games. A lot of game design principles carry over regardless of whether it’s a computer game, board game, playground game or card game.” Lantz adds that for a game to be successful, designers should want to play it, too. If you’re having fun, then you might be on to something.

5 Truths about Money During the Pandemic