Behind the Scenes with a Professional Stage Manager

Perhaps you love the stage, but not the spotlight? Why not consider a career behind the curtain? In this audio podcast, recent college grad Amy Fisk, an intern at an active regional theater in New Jersey, offers a backstage look at the life of a professional stage manager, where it’s important to have a mind for details and a heart for interacting with all types of personalities.…Read More 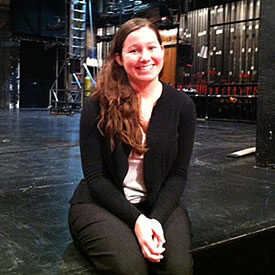 Knowledge@Wharton High School often gives glimpses into different types of careers, everything from prosecuting attorneys to what it means to be a journalist in today’s tech-driven world. Recently, KWHS editor Diana Drake sat down with Amy Fisk, a stage management intern at McCarter Theatre, a regional cultural venue for theater, dance and music in Princeton, N.J., to discuss the role of a stage manager and why she thinks she is well suited for this detail-oriented career.

An edited transcript of their conversation follows.

Amy Fisk: Of course. Thanks for having me.

KWHS: What is the role of a stage manager and what are your responsibilities here at McCarter?

Fisk: The stage manager is the liaison between everyone on the team. You are in rehearsal the entire time that [a play] is rehearsing, and then you’re also there the whole time that it’s performing. You’re the one who is there for the production the longest. You start before anyone comes – when it’s still an idea [and you are learning] all the concepts. And you follow it through until closing.

You bring everything [involved with] the director’s vision and make sure that it’s maintained after they leave, after opening [night]. You make sure that all the design notes are given to all the designers whenever they need to be. [tweetthis alt=”” hashtag=”” url=””]You’re that person who makes sure that everyone else can do their jobs. You take care of all the details.[/tweetthis]

Basically, that’s what I do at McCarter. Our resident stage manager, Cheryl Mintz, has been here for many, many years. And I’m here for the year [as an intern]. So I help her do [the stage manager job].

My internship is a little different. I spent half of the year with the main stage shows. So I was working on [plays that ran at McCarter in 2013, including] Proof, The White Snake and A Christmas Carol. Now I am switching over to the education department, where I am the sole stage manager on all of their shows. I am doing that for about four shows right now, working with students and professional designers. But in the beginning of the year I was helping Cheryl and the assistant stage manager do all of what I just [described]. It’s a lot of work, but I love doing it.

KWHS: Why did you decide to become a professional stage manager? Were you involved in theater in high school? What led you down this path?

Fisk: I did theater in high school. I fell into stage management accidentally. Actually, I feel like most stage managers [fall into it]. I am from Hawaii, and I was part of the Hawaii Young Actors’ Ensemble, which started my sophomore year of high school. In the first year, I was [acting in] the production. They did Shakespeare every year and we did [A Midsummer Night’s Dream]. I was like, ‘Sure, I’ll be in it –that sounds fun.’

The second year they introduced technical backstage apprenticeship programs. I originally applied to be the directing apprentice. I wanted some more experience in [theater roles other than] acting. I didn’t get [directing], but I got the stage management apprenticeship. I thought that the stage manager from the year before was really cool. I was like, ‘I don’t understand what she does, but I would love to hang out with her more. She seems fun.’

I realized that you could make a career from being organized and being a leader. I like to be that person who has all the knowledge about something, [which is] really important as a stage manager — to have everything and to know everyone. I love doing that in general. I started doing it more and more, and it led me here.

KWHS: What has been your educational path to this point? And how did you land this internship?

Fisk: Once I graduated [from] high school, I went to college at DePaul University in Chicago. I was in the theater school, but I wasn’t a stage manager major. I was a theater arts major, which is general theater. I took classes in everything from costume design to stage management to acting. I did a little bit of everything, but my focus was in stage management.

Once I actually started working on productions, I was always the stage manager or assistant stage manager. My [college] advisor knows Cheryl, [McCarter’s] resident stage manager. They both went to Yale — not at the same time, but they have a close-knit group of Yale graduates. [In my senior year], she said that she thought that I would get along with Cheryl and that this internship is a great opportunity.

So McCarter was one of the places that I was [considering for my training]. Once I got an interview with Cheryl, I [thought she was] great. She seemed like she loved her job. They had just announced their [production] season right before I was interviewing, and I thought that the season looked fantastic. Once I got [accepted as an intern], I knew this is where I was going to go.

Fisk: You definitely have to be a people person. You have to work with everyone, which means a lot of different personalities. [tweetthis alt=”” hashtag=”” url=””]You need to learn how to adapt to working with lots of different kinds of people.[/tweetthis] You have to be able to go up to people and talk to them and even know them before they actually introduce themselves. You have to have a lot of background information and do lots of research. I think something that has been useful for me so far is to be practical.

If you can’t get [in touch with] a prop shop or a costume shop and you need something right away, then you have to make do with what you have. If an actor needs some trash around the set, you have to [provide it]: ‘All right, I have some chips from my lunch. I am going to take them out [and] use this bag [for garbage]. I am going to get anything I can to help these artists.’ That’s what you are trying to do as a stage manager — help everyone do their jobs in the best way possible. [tweetthis alt=”” hashtag=”” url=””]Being practical and being able to make something out of nothing – and the best something out of nothing that you can – is a really great quality.[/tweetthis] I think that [skill] gets overlooked a lot, and has really helped me so far.

KWHS: It also sounds like there is an element of creativity in your job, even if you are not the one in the spotlight.

Fisk: Yes, there is. I remember in school we were having debates about whether stage managers are artists. I think that there is a specific art to stage management. It is a lot different than being a designer, but you have a certain creativity and artistic sense about you. It just comes out in different ways.

KWHS: You have mentioned really enjoying your internship here at McCarter Theatre. What has been your best lesson during your time here?

Fisk: I have gotten to work with a lot of different professionals, people whom I have been idolizing for a long time and have dreamed of working with, specifically Mary Zimmerman, director of The White Snake. We read her plays in class and then I got to actually work with her. She does a lot of spectacle theater – it’s very big and bright. It’s amazing and very technical.

Being able to see her process and how she comes up with these ideas from nothing is amazing. Working with all the different people has been amazing — figuring out how to interact with different types of people and [how to gauge] their personalities. [My] interpersonal communication has been developing. I’m used to working with fellow students, so working with people who have been established in theater for longer than I’ve been alive has been fantastic.

Fisk: I would love to work on Shakespeare shows. They are my favorite type of theater to work on. I hope that’s where I end up. I love to work on classics, but I also love musicals. And I love to work on spectacle things like I just mentioned. McCarter gives me a little taste of everything. I’m trying to decide what I like to do.

Even when we are not working on shows, Cheryl sends us into New York City to shadow [theater professionals]. We have shadowed Lion King on Broadway. We have shadowed at the Metropolitan Opera, and we are just about to shadow at the New York City Ballet. We get to have a taste of everything. Now I’m trying to decide, ‘Oh, I really like that, but I would rather not do that.’ I don’t want to say that I don’t want to do something, though, because I don’t want to limit myself. I’m figuring out what I want to do, and [my internship] is not over yet. I’m not totally sure, but I have some ideas.

KWHS: And why Shakespeare?

Fisk: I was also a double English major in college. I [majored in] theater arts with a double major in English literature. I’ve always liked Shakespeare. I love the poetic language. I love what you can do with it. You can do something traditional or more modern. You can do something anywhere in between. It’s so easily adaptable and workable that you can never see the same play twice. Even if you see Hamlet in [two different theaters], it is going to be totally different. I love that. I love the story, and I love how you can twist it in different ways.

KWHS: What advice would you give to someone who may be thinking about a backstage career in theater?

Fisk: I say do it. Don’t let anyone get you down because [it can be] really hard. You are putting yourself out there all the time, especially if you are doing something design-wise. You are putting a little piece of yourself out there for people to look at. That’s hard. But I think that if you stick to it, you have confidence and you believe in what you are creating, then it is going to show and people will find that you are fantastic. It will be great for you.

KWHS: Amy, best of luck and thank you for talking with Knowledge@Wharton High School.

Fisk: Of course. Thank you again for having me.

Amy Fisk says, “I realized that you could make a career from being organized and being a leader.” What does she mean by this? What qualities should a successful stage manager have?

Fisk’s internship is exceptional because it is very hands-on. How is her internship at McCarter preparing her well for a career in stage management?

Weigh in on the debate over whether or not stage managers are artists. Do you agree or disagree with that characterization? Why or why not?