You’ve spent more than one weekend shopping there at destinations like Abercrombie & Fitch (or just hopping the escalators) with your friends, but did you ever stop to think: what is a mall, anyway? KWHS explores the mall business, with a little help from some high schoolers who work with the Mall of America’s trend board.…Read More 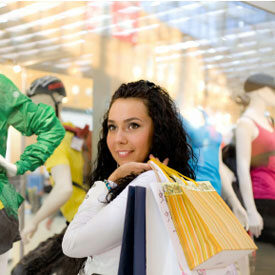 Like many teens, Samantha Kjissinger Coady at Prior Lake High School in Prior Lake, Minn., loves to hang out at the mall. She knows where to shop for the coolest clothes and who makes the best mocha latte. But when it comes to knowing what’s involved in running a mall, the teen admits to never giving it much thought.

That was before she took an escalator to the back offices at the Mall of America (MOA), one of the nation’s largest shopping malls located in Bloomington, Minn. The 4.2 million-square-foot complex, which has more than 520 stores, an indoor theme park, an aquarium and more, has become a model of success for malls across the country.

As a teen member of the MOA’s trend board — an initiative that has more recently given way to other mall activities — Coady participates in fashion shows and  photo shoots and is an inside voice for the mall on what’s hot and what’s not in the minds of teens. “It’s been an awesome experience so far,” says Coady, who helped promote the premiere of Disney’s High School Musical 3 at the mall’s new theater. “I’ve learned there’s actually a lot happening behind the scenes that makes the mall successful,” she says.

“If I owned a mall I would probably hire an excellent clean-up crew — no one wants a dirty mall,” says Peter Kruse of Mounds Park Academy in St. Paul, Minn.

Dan Jasper, public relations manager for the Mall of America, couldn’t agree more. Jasper says the mall operates with “a lot of dedicated people,” including a top-notch cleaning staff. From a maintenance crew, a security team and a recycling staff that work around the clock, to public relations, tourism and events departments, MOA employs nearly 1,200 people. They keep the mall in business 364 days a year.

Kruse, a member of the trend board for three years, says he also thinks it’s important to open mall stores where people want to shop. “MOA’s leasing department is responsible for maintaining an exciting and vibrant mix of stores,” says Jasper. Even with the mall’s nearly full occupancy, it’s always looking for new stores to complement existing tenants.

“In order to run a mall you need to put yourself in the shoppers’ shoes and know what they want,” says Rebecca Enrooth, a senior at New Prague High School in New Prague, Minn.

The creation of the trend board is one way Mall of America has tuned into what shoppers want, says Jasper. “Teens are a huge market for us,” he says. “The mall has more than 80 stores that cater to a younger crowd.” Enrooth helped the Trend Board promote one of MOA’s newer tenants, Garage, a retail fashion chain popular with teen girls. Abercrombie & Fitch, Hollister and American Eagle Outfitters are other favorite teen retail destinations.

Many of the mall’s events are geared toward teens, as well, such as celebrity appearances by Twilight cast members and the Jonas Brothers. Enrooth was also psyched about seeing iCarly star Miranda Cosgrove at a recent autograph signing.

“Our events department plans and promotes more than 350 events a year that are all free and open to the public,” says Jasper, adding that the events bring in corporate sponsors, as well as potential shoppers. The mall can also host anything from a birthday party to a wedding.

All these business activities help MOA attract customers and make money. MOA is planning an expansion that will more than double it’s size.

And like any good business, MOA has a set of “Mall Rules” to help control the chaos and crowds. An escort policy requires teens age 15 and younger to be accompanied by a parent or guardian age 21 or older after 6 p.m. on Fridays and Saturdays.

When it comes to a mall’s marketing strategy, Coady says it’s important to stay as current as possible in how it attracts shoppers. “It’s not just about who you’re marketing to, but how you’re doing it,” she says. From advertisements on YouTube and MySpace to texting campaigns and a new interactive website, Mall of America embraces high-tech trends.

“I think that giving back to the community is very cool, too,” adds Coady, who helped out with the MOA’s participation in Operation Glass Slipper, a program that collects used prom dresses and accessories and donates them to girls in need. The Mall of America has helped nonprofits raise more than $10 million annually.

Being “green” is another way MOA stays current, says Jasper. The mall converts the fat from its restaurant fryers into more than 50,000 pounds of biodiesel per month. And it recycles more than 60 percent of waste — an average of 32,000 tons per year.