Talk about a love for soccer. Kids in Africa are known to fashion soccer balls out of just about anything they can find in order to play the game. Jeff DeCelles and his Grassroot Soccer colleagues have used that passion as a platform to teach young people about HIV and AIDS. In this podcast with Knowledge@Wharton High School editor Diana Drake, DeCelles discusses soccer for social good and his path from the University of Vermont to Sub-Saharan Africa.…Read More 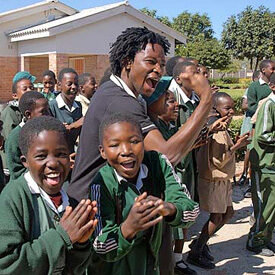 Jeff DeCelles is the director of curriculum, partnerships and innovation for Grassroot Soccer, an organization in Cape Town, South Africa that uses soccer to teach young people about HIV and AIDS.

The Grassroot Soccer curriculum involves activities and games that provide young people with comprehensive HIV prevention and life skills education. Soccer is the sport of choice because it is an integral part of local cultures across the world – and helps educators get in front of hard-to-reach youth. The organization has found that just arriving at a field with a soccer ball can win instant friendships and access to local communities.

Knowledge@Wharton High School met with DeCelles recently during the Child & Youth Finance International summit in Amsterdam to talk about soccer for social good and his path from the University of Vermont to Sub-Saharan Africa.

Knowledge@Wharton High School: Hi, Jeff. Thank you for joining us. Tell me a bit about Grassroot Soccer. What is it exactly?

Jeff DeCelles: Grassroot Soccer is a program in Sub-Saharan Africa where we use soccer to teach young people about HIV and AIDS, to give them the knowledge and the facts about HIV/AIDS, but to also empower them with the tools to make healthy decisions in regards to their sexual lives, to avoid HIV.

DeCelles: We use soccer because it’s probably the most ubiquitous or the most widespread form of entertainment in the world. It’s something that kids everywhere like — boys and girls. We started the program in Zimbabwe [in 2002] and we trained famous professional soccer players to come into the schools and not just tell people “This is HIV, this is AIDS,” but actually engage them through sports and games, actually teach them through learning. We found that the combination of using role models and also making education fun seemed to be making a difference.

KWHS: How did you end up working with the organization?

DeCelles: When I was an undergrad at the University of Vermont, I spent a semester in the Dominican Republic. I’m a soccer player, so I brought my soccer boots. The soccer was just terrible because all the best athletes play baseball. They said, “Okay, if you want to play soccer, you need to go to this [Haitian] community.” The Haitians play soccer and the Dominicans play baseball [and there is long-standing conflict between these two nationalities]. One thing led to another and I showed up, I played with them, and they said, “Can you coach us?” I said, “Yes, I can coach you.” People said, “We can’t get into the local league because of racism and all of these issues.” I used some contacts and we got them uniforms and league fees. We basically took a Haitian team that wasn’t allowed into the league and leveraged some contacts to get some donations, got them playing in the Dominican league and then had Haitians and Dominicans interacting in safe, healthy ways through soccer. That was my first exposure to sports for development, or using sports for something beyond just enjoyment or fitness.

After that, I heard of the group Grassroot Soccer. They were a couple of months old [when] I called them up. I said, “Can I come to Zimbabwe and volunteer?” This was my last summer at university, and they said, “Yes, come over.” I got a small fellowship, a couple thousand dollars, to go volunteer. I volunteered for a couple months and then I finished my studies. At the same time, Grassroot Soccer was growing and we were applying for some bigger grants. Some money came in and I was able to work full-time.

KWHS: When was that?

KWHS: So how has the organization grown? It sounds like you’ve been there since it has ramped up.

DeCelles: When we started, I would be in the classroom with the soccer players teaching the games. We delivered a pretty high-quality program, but not at scale. We’d bring about 10 coaches in, all famous professional soccer players, and we would teach about 100 kids a month. We did some evaluation, found some results that were encouraging and really felt that we had something good. But we wanted to make it bigger, and there is a finite number of professional soccer players. So we thought, “How can we scale up? How can we grow this?” One area was to see if we could use other role models instead of just famous professional soccer players. A big change is that now we train coaches, we train school teachers and peer educators. Anyone who is a role model in their community can be a Grassroot Soccer coach. We used to do 100 youth a month. By 2014, we hope to graduate 1 million.

KWHS: Is there an anecdote or story that you can tell of a student whom you know you’ve impacted – [someone who] stands out in your mind as special?

DeCelles: There was a kid named Muki in Zimbabwe [who] was first a participant in Grassroot Soccer. The program meant so much to him that it became a big part of his life.  He started telling all of his friends. I came back a few years later, and he was a Grassroot Soccer coach and also a professional soccer player. And then I came back a couple of years later and he said, “I want to move to South Africa.” I said okay and he came to South Africa. This kid went from being in the classroom to being a coach and is now one of the rising stars of the organization. I could see him running his own organization or being a director of Grassroot Soccer one day.

KWHS: What do you think is a young person’s role today in social impact issues?

DeCelles: Whenever I get back to the U.S., I’m always surprised that there are a lot of young people who are thinking about programs in their own communities, but also in Africa. I think kids today with the Internet and with technology have a much more worldly view than I did. I’m amazed at how many high school students in the U.S. know what we’re doing and support us.

I think one great thing is to get involved and learn about what’s going on in Africa. A lot of times growing up in the U.S., I only heard the negative things about Africa. I heard about disease, war and famine, but I didn’t hear a lot about the amazing cultures and all the positive things that are happening. I would really recommend, first of all, just learning about what’s going on. We’ve [also] had some amazing students who have supported us through fundraising efforts — just organizing a small, barefoot soccer tournament with their friends and raising a couple hundred dollars. You raise money that directly helps the organization, but I think raising awareness in the U.S. can really help us out. Not just us, but similar organizations. We do have internship programs [that are] for students who have finished their undergraduate programs, usually at U.S. universities. They’ll raise their own money and come and spend a year with us in Africa helping out with the coaches, with monitoring fundraising, bookkeeping, anything you can imagine.

KWHS: You’ve stayed in Africa a long time. Do you like living there?

DeCelles: I do. I started out in Zimbabwe. Then I lived in Zambia and now I live in Cape town, South Africa. Cape Town is a really great place to live.

DeCelles: I like that it is still Africa. Cape Town is much more developed than other cities in Africa, but it’s still Africa. You still feel it. It’s still an African culture, but at the same time, you can go surfing and that’s a big thing for me.

KWHS: Thank you very much for joining us.

How did Jeff DeCelles get involved with Grassroot Soccer? Was it a traditional career track? What does this say to you about inspiration and innovation?

What are your impressions of Africa? Do you agree with Jeff when he says, “A lot of times growing up in the U.S., I only heard the negative things about Africa.”?