Since the first Earth Day in 1970, people have been coming together each year on April 22 to celebrate the environment and advocate for sustainability and protection. But as this year’s theme, “A Billion Acts of Green”, suggests, true environmental change is a full-time effort. High school students around the country are finding ways every day in their schools and communities to raise awareness of environmental issues, inspire change and improve the livability of the planet. …Read More 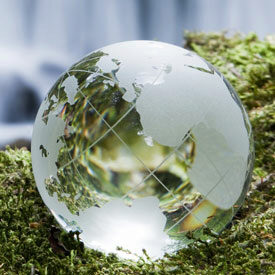 She should know. Sanders-Reed, a 16-year-old junior at Albuquerque Academy in Albuquerque, N.M., is at the forefront of one of the largest climate change youth movements to ever hit the teen environmental activism scene. As an organizer for the iMatter March, she is responsible for helping create energy around a global event – to be held May 8 – that seeks to get one million youths to march about climate change. So far rallies are planned for cities throughout the U.S. and in 18 different countries.

The iMatter March is the brainchild of Alec Loorz, a guru among young climate change activists who is also 16 and who started the nonprofit Kids vs Global Warming in Oak View, Calif., when he was 12. “We’re marching to say that we need to live as if the future matters,” says Sanders-Reed. “We’re stressing the moral and justice sides of climate change. It’s not a financial issue; it’s not a political issue; it’s an issue about our generation’s survival and the livability of the planet.”

Both Sanders-Reed and Loorz are examples of students who are finding ways both large and small to promote environmental sustainability within their schools and their communities through education and awareness. And while the iMatter March is youth eco-activism on a grand scale, sound green principles among teenagers can and should start in the classroom, says Sean Miller, director of education for the Earth Day Network, a group in Washington, D.C., that annually organizes the worldwide celebration of Earth Day and helps schools go green through changes to the physical buildings and curricula.

“We want people to grow up with the knowledge and skills necessary to thrive in a 21st century world and society,” notes Miller, who is also co-author of the book, A Young Activist’s Guide to Building a Green Movement and Changing the World. “Environmental education is about building the next generation of leaders so that they are sustainability natives instead of sustainability immigrants. The relationship between the economy and the environment is going to be a defining issue. We need to prepare students to make sound decisions.”

Topping Miller’s list of effective green high schools is Newton North outside Boston, which uses food waste generated each day from the cafeteria and local restaurants to produce its own biodiesel to power cars and school buses. Students in chemistry class are now making about 40 gallons of biodiesel each week and are experimenting with algae-based fuel, an alternative energy with big potential. “That’s how you grow the green economy,” says Miller, a former teacher in D.C. public schools. “If I was a researcher with the Department of Energy right now, I would be looking for students exactly like this with the skills and knowledge working on these issues in the classroom.”

Michelle Patzelt, 18, is getting a daily lesson in alternative energy that she believes will ultimately fuel her dream career of becoming an environmental lawyer. “For the past couple of years, we have been developing a presentation to give to children of varying ages, from daycare to college, about how to be green, what is green and how it can affect the earth and their future,” notes Patzelt, a senior at Bloom High School in Chicago Heights, Ill. “I like to talk about our biodiesel program to make fuel out of used vegetable oil – how it works and why it’s better for the environment.”  Patzelt, a member of the science club, gave the name  “Green Machine” to an old school bus painted blue and green that runs on biodiesel and reminds her of Scooby-Doo’s “Mystery Machine.”

Like Bloom, New Vista High School in Boulder, Co., is communicating with area students about environmental practices. “We put on an all-school summit this fall where we invited other high schools to come and talk about their environmental initiatives,” notes Marissa Bramlett, a senior and member of New Vista’s Earth Task Force. High on the agenda was a discussion of grant-writing strategies to help fund school solar panels. “So often people tell teenagers that their contributions are minimal,” says Bramlett, who is headed to Warren Wilson College in North Carolina next year to pursue a degree in environmental studies. “It’s really empowering for high school students to be able to create this change.” Bramlett is also helping design New Vista’s first green prom on April 29, which includes a dress exchange through a local consignment shop and fewer plastics on prom night.

For Varun Kumar, 15 and a freshman at Thomas Jefferson High School for Science & Technology in Alexandria, Va., the high school environmental club is a place to channel his developing interest in green issues. He feels he now has a greater voice to effect change. “My mom works at the World Wildlife Fund and I’ve been exposed to these topics for a long time,” notes Kumar, who is working with his classmates to raise awareness about the negative impact of palm oil used to make Girl Scout cookies. The harvesting of palm oil destroys the natural environment and damages the habitats of orangutans and tigers.

Perhaps in contrast to the collective climate change mindset of Sanders-Reed and her iMatter March cohorts, Kumar touts the value of small, yet powerful environmental acts. “Plant a tree every now and then,” he advises. “One tree can take out one ton of greenhouse gases. Every little bit helps.”