In March, some of the country’s most innovative high school seniors traveled to Washington, D.C., for the Intel Science Talent Search 2013. KWHS spoke with $100,000 winner Sara Volz, a teen from Colorado, about biofuel, algae and building a laboratory in her bedroom.…Read More 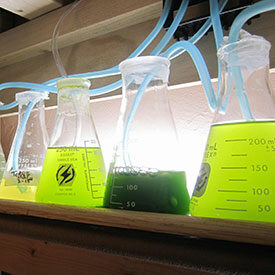 Last week, some of the country’s most innovative high school seniors traveled to Washington, D.C., for the Intel Science Talent Search 2013. The Intel Science Talent Search, a prestigious science and math competition, recognizes 40 high school seniors who are leaders in innovation and who are seeking to solve some of the world’s greatest challenges. Jonah Kallenbach, 17, of Ambler, Pa., won $75,000 for a bioinformatics study that breaks new ground in predicting protein binding for drug therapy. Adam Bowman, 17, of Brentwood, Tenn., won $50,000 for designing and building a compact and inexpensive, low-energy, pulsed plasma device. Hannah Larson of Eugene, Ore., received a $40,000 award for her research into an abstract mathematical structure that is important in many areas of theoretical physics and computer science.

The spotlight shone the brightest, however, on Sara Volz, a senior from Colorado Springs, Colo., who received the top award of $100,000 from the Intel Foundation for her research on increasing the oil content of algae to create an economically viable source of biofuel. Knowledge@Wharton High School spoke with Volz a few days after the event to discuss her algae exploration and her new honor as Intel Science Talent Search champion.

Knowledge@Wharton High School: What has been your path to the Intel competition?

Sara Volz: I’ve always loved science. My real scientific passion has been biochemistry because these molecular interactions have always fascinated me. These cells are like tiny microcosms that have so much complexity and so much interesting stuff going on. I’ve also been interested in the issue of alternative energy since about 7th grade. I started doing science fairs in 6th grade. I really liked the experience of doing research projects and the experience of getting to meet other people who liked science inquiry. When I was thinking of project ideas for Intel, I wanted to think of some sort of problem that was an issue for the world, something that needed to be fixed. That’s when I came on the idea of alternative energy. And when I found out about algae biofuel in 9th grade, that was a perfect fusion of my two passions: biochemistry and alternative energy.

KWHS: What is alternative energy, and why does it really interest you?

Volz: Fossil fuels [petroleum, coal, natural gas] are not sustainable; they’re running out. Because these sources are made over a course of millions of years, we don’t have enough to power our economy in the future. Fossil fuels also increase carbon in the atmosphere, which is bad due to global warming. People are looking at a lot of different alternatives to fossil fuels, like biofuels.

Biofuels are fuels that are made from renewable, natural oils. For instance, biofuels can be made from vegetable oil or soybean oil. That is awesome because it is renewable and sustainable, but the problem is that land crops like soybeans and corn, which makes ethanol, are not a good way to produce oil. Plus they take up land, which takes away from food supplies. Land crops are not the [best] way to make these [renewable oils]. Algae biofuels use algae as an alternative producer of these natural oils. Most of the algae that people are looking at are these unicellular organisms, so they’re not quite kelp but they look green in water, basically. I like algae because you can grow them on land that we don’t need for food, you can grow them in salt water and you can even use things like waste runoff to get the nutrients that these algae can take in. You can also use carbon dioxide emissions from factories [as a nutrient] because algae is photosynthetic and takes in carbon dioxide, sunlight and water to make this energy.

KWHS: How long have you been researching this form of alternative energy?

Volz: I’ve been working on algae biofuels for four years. I started by doing some basic experiments on my own. I was able to talk to some companies working in algae biofuels and professors and researchers at a couple of different institutions. I accumulated supplies to furnish a laboratory setup in my bedroom, which is actually pretty functional. After preliminary work like that, I was interested at looking at alternative ways to make algae increase their oil production. Some ways that have been used in industry include changing the genome of the algae or limiting nutrients to stress them into producing more oil. Those work all right, but I had a new idea that I haven’t seen before, which is artificial selection. As a concept it isn’t new, but this particular application is new. It’s the same principle as bacteria gaining resistance to an antibiotic or a weed gaining resistance to an herbicide. In this case, artificial selection is actually giving the algae a trait that we want, which is more oil. I used this chemical that kills cells with low oil production, which is then selecting for populations of cells with high oil production. So if you kill everything with low oil production, then that basically says to the cell that you have to evolve and adapt to survive by producing more oil. Eventually I developed these cell lines with high oil content. I don’t know of anyone having done this before.

KWHS: How was your overall experience at the Intel Science Talent Search?

Volz: There were 1,700 submissions from across the country. You had to submit a bunch of essays and recommendations and a 20-page research report. This competition is more about your potential as a scientist and less about your particular research, although it is a big part of it. There were 300 people selected as semifinalists, then that was narrowed down to 40 finalists who got to go to this week-long event in Washington, D.C. It was an amazing, fantastic experience. It’s a really big event. I got to meet a ton of awesome peers. It’s really wonderful to meet other people who are so passionate about science. When you are just working on your research by yourself you wonder, ‘Ok, does anyone else really care that I’m doing this?’ You’re always looking for that intellectual connection with someone else. I’m really nerdy about algae, but at this event I met so many people who are passionate about their particular fields. We got to shake President Obama’s hand, which is an experience I will remember for a long time. The people were the best part of this competition. Frankly, I wasn’t expecting to win anything. I was going to be pretty happy to be one of these 40 finalists. When my name was called, I was really surprised. I still feel like I don’t deserve it, because there were so many really smart people with amazing research. I feel honored to have met them. I made some lifelong friends.

KWHS: What does it feel like to be a science celebrity, and what do you plan to do with your winnings?

Volz: It’s been a whirlwind. I was supposed to fly home last Wednesday, and they pushed my flight back so I could do some interviews in D.C. It hasn’t quite sunk in yet. I am going to use the $100,000 for school; I’m going to MIT in the fall. It’s going to defray a significant portion of those expenses, which I’m psyched about.

KWHS: Do you anticipate companies possibly wanting to commercialize your algae with increased oil content?

Volz: Potentially. My results are still preliminary, which I tried to emphasize when presenting my work. There are still several molecular analyses that I still want to do to confirm my results. I would like to do some molecular biology techniques that I can’t really do well in a home lab. When I get access to more professional locations in which to do my experimentation, it will be a lot easier to test my selection scheme more efficiently.

KWHS: What is your ideal career path? Will you become a professional scientist?

Volz: At this point, I’m thinking I want an academic career. I’d like to get my PhD in something like biochemistry, go on to do research and become a professor somewhere.

I feel like a very unfortunate misconception is perpetuated in our society about science. Too many people view it as some strange thing you can’t understand and that is confined to a laboratory. They think that it can’t be relevant to the layperson. I believe that is the wrong way to be thinking about science.  I like to think of science as a process; a verb rather than a noun. It’s not a database of facts; it’s the process of questioning. Even if you are not in a scientific field, you can still be a scientist if you have that curiosity.

KWHS: What are your other interests outside of science?

Volz: I am a musical theater person. I sing and act. I’m also in speech and debate. I have a range of eclectic interests, such as collecting earrings. I have a science earring collection, such as DNA, periodic tables and all sorts of things like that. I have more than 50 pairs of science earrings, and my favorite is a pair that spells a word with elements of the periodic table: Nitrogen (N), Erbium (Er) and Dysprosium (Dy), which spells ‘Nerdy.’

KWHS: How are your friends at home reacting to your big win?

Volz: Lots of congratulations, and ‘Hey, Sara, want to give me some money?’

What is biofuel, and how does algae produce this kind of alternative energy?

How does Sara Volz describe science? Do you agree?

Volz has a unique earring collection related to her passion for science — do you have a similar collection? If so, share it on Facebook at https://www.facebook.com/whartonhs.

One comment on “Biofuel Bonanza: Insight and ‘Nerdy’ Earrings from Intel’s $100,000 Winner”