Social media (think Twitter, Facebook, YouTube) are transforming publishing as we know it. As a result, the field of journalism is also changing, adapting to the need for more tech-savvy writers and editors. Journalists today must be multi-talented – penning both feature stories as well as captivating their readers in 140 characters or less. …Read More 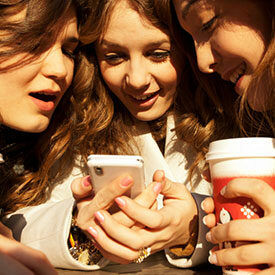 When Ashley Mateo, a news editor at Seventeen Magazine, needs a little editorial inspiration, she does what most young journalists are doing — she logs on to Twitter. “I tweet all the time,” she says. “It’s been a valuable tool in helping me build a brand, interact with readers and find teens for the magazine’s ‘My Life’ column.”

Although tweeting has become part of her daily work routine, Mateo admits that when Twitter first hit the social media scene in 2006, she wasn’t so quick to jump on the bandwagon. “At first I tried to ignore it thinking it was just a fad,” recalls Mateo, who at the time was attending Boston University and majoring in magazine journalism. “Thanks to a great internship with MTV News around the same time, I learned the importance of embracing all social media platforms, no matter [your] career paths.”

According to recent stats from MuckRack, a platform that connects journalists and sources, the top news outlets for journalists using Twitter are the Associated Press with 471 accounts, followed closely by The New York Times with 463.

Social media are Internet platforms that connect people through dialogue, photos and videos. For today’s job-seeking journalists, experience in tweeting as well as pinning, blogging and posting is becoming as important on a résumé as multiple degrees, says Joshua Benton, director of the Nieman Journalism Lab at Harvard University in Cambridge, Mass. “The way news is presented and consumed today is very different from just 10 years ago and requires a new skill set,” he says.

In recent years, the publishing industry has been undergoing a transformation. Take, for instance, Newsweek and Spin magazine, both of which shut down their print editions at the end of 2012 to expand their digital offerings. This is creating some interesting job opportunities in everything from video streaming and blogging, to writing content for apps. “Journalism is far from dying; it’s just changing,” says Maggie Shiels, program administrator for Google’s Journalism Fellowship, a 10-week program aimed at journalism students interested in using technology to tell stories in new and dynamic ways. “Students coming through are approaching technology as a tool to help them do their jobs. As a result we’re seeing the worlds of technology and journalism merging.”

Lindsay Graf, a sophomore at the University of Iowa’s School of Journalism and Mass Communication, isn’t worried at all about what the future holds for her. In fact, she’s very excited about all the changes taking place and says her classmates are, too. “I think because the industry is changing so much, companies will be looking to hire people who know how to use the technology and how to really market it,” Graf says. “In college, I’m being taught how to use social media to actively engage my audience, post and share stories and ask a question about what people think to give readers more of a say.” After graduation, Graf hopes to work for a music/entertainment magazine and eventually launch her own online magazine with a small local print base.

Journalists today must be multi-talented, says Vanessa Shelton, executive director of Quill and Scroll, an international honorary society for high school journalists organized at the University of Iowa in 1926. “In addition to the traditional traits of being curious, ambitious, well-informed and organized, writers today need to be tech-savvy and have various interests,” says Shelton. “Writers are expected to take a greater role in getting their stories out there and building an audience, which is why it’s also a good idea to take some entrepreneurial and marketing related courses.”

Having more than one interest hasn’t been a problem for Graf, who is pursuing a major in creative writing as well as a double major in journalism and mass communications. Her extracurricular activities include providing design and layout for various campus publications, serving as the assistant editor for Quill & Scroll’s magazine, blogging about music and writing novels.

If you are interested in a career in journalism, take the time to explore the different options in the field, suggests Shelton. She sees students pursuing broadcast journalism, photojournalism, investigative journalism and public relations. “To think that the only job opportunities out there are with a magazine or a newspaper is outdated,” says Mateo. “For example, there are places hiring writers that I never would have thought about, such as record labels and fashion companies. MTV has a huge editorial team.”

Benton suggests first figuring out your passion, exploring it further and writing about it. Start a blog, and every time a new digital platform or tool emerges, give it a try. “There was a time when you needed someone’s permission to be published,” Benton says. “Thanks to social media, that’s not the case anymore.”

Take a few extra courses to complement your interest area, adds Shelton. “If you want to write about politics, consider taking classes or getting a degree in political science. The same goes for interest in being a business writer, sports journalist or music critic.” As Graf notes, “There are plenty of job opportunities out there, but you definitely can’t sit around and wait for them to come to you.”

What is social media, and how is it changing the face of journalism?

What other types of studies might help budding journalists build the necessary skills these days?

Do you write a blog? If so, what is the focus? If not, what type of blog might you like to start?