In the coming weeks, your mailbox will be stuffed with what you hope are those coveted college acceptance letters. Then the real work begins as you set out to make what is likely the biggest decision of your life thus far. An expert in decision sciences offers some valuable guidance – as do a few seniors who have been wrestling with their own momentous choices. …Read More 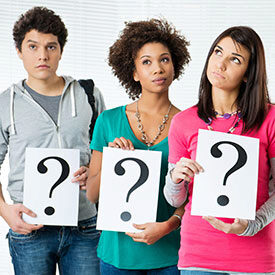 The vigil has begun. High school seniors everywhere are watching their mailboxes with great anticipation over the next month as colleges and universities send out acceptance and rejection letters and financial aid information. Then comes decision time. Which college will you choose?

“I consider choosing a college the biggest decision of my life,” says Rohon Nandi, a senior at Eastern High School in Voorhees, N.J., who plans in the next few weeks to decide where he wants to spend at least the next four years. He applied to 11 East Coast schools. It’s mind boggling to realize that there are several different paths and experiences I could go through” just by choosing one college over the other. “It was the biggest decision [I’ve ever made], and it was certainly scary,” adds Sophia Kruger, a senior at Kingswood Oxford School in West Hartford, Conn., who decided a few weeks ago to head to Wharton this fall. “I wanted to find a place where I [could] be a student, but also where I felt I would be able to make a meaningful contribution. I constantly reminded myself that the college decision is a two-way street. I want the college, and hopefully the college wants me, too. It is the first decision that plays a significant role in my future.”

That kind of pressure can quickly lead to paralysis. Your future is on the line. How can you possibly make this momentous choice? What if you make a mistake?

The worst thing you can do is let the power of the decision overwhelm you. “The most effective leaders recognize they have to go ahead and make a decision when they don’t have all the answers, when there is still uncertainty,” says Kathy Pearson, an expert in decision sciences and a former adjunct professor at Wharton. “That’s definitely where high school students are. You don’t know some things — you might have a bad roommate, for instance. But you need to take a stand and make a decision.”

Pearson, who has spent many years working with and educating business executives about decision-making and problem-solving, suggests three key strategies to help you come to a final determination: data analytics, judgment and critical thinking. She explains them like this:

Do Some Serious Analysis. We’re in the era of big data – lots of statistics and numbers to help us quantify the return on investment for the decisions we make. “That is an important piece from a high schooler’s perspective,” notes Pearson. “Look at things like how does this university rank in terms of your own interests? If you want to be an accountant, then how does it rank in that field? Find some numerical data. What is the professor-to-student ratio?” As Nandi prepares to make his college decision, he says that he is trying to “accurately decide and analyze which college offers the best benefits.” That involves everything from the school’s depth of practical knowledge to a comfortable setting where he can build lasting relationships. “The college should offer me a reasonably high return on investment, while offering several internship opportunities, learning experiences and other activities that can help broaden my knowledge,” Nandi says.

What Does Your Gut Tell You? Pearson’s second tactic in the decision-making process is judgment. You need to tap into your intuition, or what she calls “the subconscious database of your experiences.” Gut, says Pearson, is part of how you choose a school. “You may have a choice between alternative A and alternative B. All the data says you should pick alternative A, but your gut says B. You can’t articulate why, but you just know that something doesn’t feel right about A, [but does] feel right about B.” Don’t underestimate the power of that feeling, she stresses.

Keep Your Eyes and Ears Open. While judgment is valuable, it can also be flawed. Therefore, you need to follow it up with critical thinking. “Critical thinking says that I don’t just go with my gut completely; I question it. There are lots of elements of critical thinking, but what I talk with executives about is the importance of getting diversity of thought,” says Pearson. “Talk with people who have other experiences than you. Research suggests that decisions made by heterogeneous groups are of higher quality than homogeneous groups. Get advice from a variety of different sources: parents, guidance counselors, friends. “Get as much diverse information as you can to inform your decision, and don’t rely on the advice of people who think just like you.” Kruger, who has already selected a higher-ed path, found this step of her decision-making particularly valuable. “Listen to the people around you,” she urges. “Even if you don’t use the advice, it can help you think about a variable that you never [knew] existed.”

And remember, a wrong decision is not the end of the world. Have an end goal in mind, suggests Pearson, and recognize that you may have to adapt to changes along the way. “It’s okay if you modify your path,” notes Pearson. “As long as you know you want to have a bachelor’s degree in four years, [be open to the idea] that how you get there might change because there’s a lot of uncertainty.”

What is the biggest decision you have ever had to make? Think back on how you made it. Did you employ Kathy Pearson’s strategies? If so, which one was most useful?

This article discusses decision-making in the context of choosing a college, however; Pearson’s insight can be used for any big decisions you have to make in life. Think about another choice you might have to make, like deciding on your first job or buying a house. Work through the steps to help you come to an informed decision.

You are a corporate executive. How do your own values and beliefs influence decision-making? Why does this make it all the more important to get diversity of thought when making a decision? Click here for a more detailed lesson plan on this topic.

What if you do make a mistake and your decision ends up not to be the best for you? What might be some alternative paths? To use a business term, how will you pivot?