College students often live for their junior year abroad – a chance to explore new cultures, meet faraway friends and delight in what is, for many, their first real adventure in a completely different time zone. University of Pennsylvania student Leigh Silver boarded a plane for London last fall with all those expectations, only to soon find out that she “just didn’t fit in.” Silver was able to look beyond her discontent to discover a whole new career path.…Read More 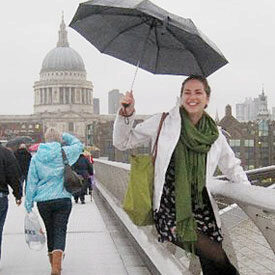 I did not love my junior year abroad.

Taking a semester abroad is the best experience of your college career, or at least that is what I was told. Easy classes, new friends, foreign adventures, worldly experiences; study abroad offers the much-needed escape from tedious assignments and routine fraternity parties. When I applied for a semester abroad at King’s College London, I was ready for such a change after two years at the University of Pennsylvania.  My time in the U.K., however, was anything but ‘the best experience’ of my college career.

I had spent the summer before my junior year in Alicante, Spain, completing a home-stay program that left me bronzed and mostly bilingual. Ready to move in with a dashing Spaniard and denounce my American roots, I was less than thrilled to fly home to Philadelphia. I could not wait for the Penn in London English Program (PLEP), heartened by the prospect of returning to Europe in September.

PLEP consisted of three English classes at King’s College London as well as a class with the theater critic for The Guardian (a British national daily newspaper) where we viewed and discussed a play each week, a much lighter class load than I was used to at Penn. I chose PLEP because it fulfilled credits for my English major. Also, other Penn students as well as Penn faculty were just a Tube ride (subway) away in case I missed the nasal American drawl. From my tiny room in Philadelphia, London seemed like paradise — a major metropolitan city with the buzz of New York yet the strange excitement of a foreign, European culture.

My excitement soon soured. I found British people unapproachable. I was glared at on the Tube for being too loud, too slow or too American. In an attempt to make British friends, I joined the women’s field hockey team. While I did find wonderful teammates, they spent most nights drinking themselves into oblivion. The food was abominable, and everything was expensive thanks to the poor exchange rate (about 1.6 dollars to 1 pound). If that wasn’t enough, the high-fashion mindset meant that wearing sweatpants (“trackie bottoms”) guaranteed disapproving stares from Londoners.

London was rainy and dark, and I was depressed.

I missed home. I missed my friends. I didn’t find the British man (ahem, prince) of my dreams. And everyone else around me seemed like they were on cloud nine floating across Waterloo Bridge to class. I realized after about a month that my complaints could be summed up in one sentence: I didn’t fit in.

That said, the city itself is an urban wonderland with strange adventures tucked away on every side street. Who was I, an upper-middle class American from an elite university with Europe at her fingertips, to complain? I just never felt at home in such a magical place, and as someone who prides herself on my ability to make friends, that made me feel even worse.

But even on nights huddled in my dorm room, eating spoonfuls of Nutella from the jar because it was too rainy to venture out for dinner, I learned a lot about myself. I learned how to deal with the discomfort of being away from home in an unfriendly environment. Traveling at times with only a small shoulder bag, I realized how little I needed to live. Most of all, I reevaluated what I wanted to do in life.

Through PLEP, I gained exposure to one of the best theater scenes in the world. Tucked away in twinkling theater atriums, I huddled next to charming intellectuals in woolen scarves as they sipped pints of hard cider. Here, at the heart of the city, I felt like a Londoner, if only for an evening.

I realized the importance of such spaces in making even the coldest people engage in intellectual discussion with those around them. Theaters and galleries all over London buzzed with talk, not just about plays, but the issues they raised. People were self-consciously aware of their place in their own city. After two years planning to be a professor and get my PhD immediately after college, I am now considering a career in arts management. I want to help facilitate these urban communities and arts spaces, and although I do not yet have experience in this professional sector, I am willing to leap into the unknown. If London taught me anything, it is to have a thick skin.

London was far from perfect, and I don’t think I will ever marry a British man no matter how seductive his accent. But I will never regret my decision to study at King’s College London. My time in Europe helped me to become a braver, better person. I am appreciative of London for pushing me out of my comfort zone, for throwing me off a predetermined career path, and for showing me that I have the time and sensibility to discover what – and who — I want to be.

Leigh Silver, 21 and a senior at the University of Pennsylvania, spent part of her 2011 summer interning with Knowledge@Wharton High School.