Is a Medical Intern’s ‘Initiation’ Harmful to Your Health?

TV shows like “Grey’s Anatomy” may give us a glimpse of what it’s like to be a medical intern in the first year -- but the reality is far less Hollywood. In the book "Intern: A Doctor’s Initiation", author Sandeep Jauhar explores the exhausting experience of his own medical residency.…Read More 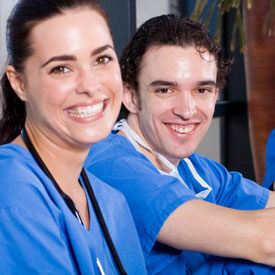 Sandeep Jauhar and his family left New Delhi when he was eight years old and moved to the United States. They lived in Kentucky for a few years and then settled in southern California. Jauhar went deep enough into the study of physics at Berkeley to earn a PhD — and then settled instead on medicine. Intern: A Doctor’s Initiation is the unsettling account of his medical residency at a New York hospital, largely focused on the first year, his internship.

Medical residency, the apprenticeship that newly minted physicians undertake after medical school and licensure, is not merely an entrée into the profession; it is akin to being initiated into a fraternity. “This introduction to the profession is a legendarily brutal year,” Jauhar writes, “for many doctors, the most trying of their professional lives. Working 80 or more hours per week and staying up every fourth night or so on call, most spend it in a state of perpetual exhaustion.”

Intern gives us Jauhar’s take on his internship, interweaving that experience with something of his childhood, family history, previous studies and work experiences.

Born to Be a Doctor?

Indian physicians and physicians of Indian ancestry have become such a common feature of the American medical landscape as to be unremarkable. That presence is increasingly reflected in the American media as well: New Delhi-born and U.S. raised, Sanjay Gupta is Cable News Network’s chief medical correspondent, the face and voice of practical health advice for millions of Americans. Jauhar’s maternal grandfather was a doctor, his brother is a doctor, he marries a doctor, and his father-in-law is a doctor.

One of the book’s prominent strengths is its apparent openness: The story we get is “warts and all.” Rather than a whitewashed memoir — a pristine family, dedicated son, proud physician, noble profession, inevitable triumph — we get some of the messier and more interesting and intimate details. Jauhar’s father, a plant geneticist with a PhD, is described as “embittered and rigid and in a constant state of conflict with professional colleagues.”

Jauhar is open about his own fumblings and failings as well. The book tells the story of his struggles with both physical injury and emotional distress as he works through his apprenticeship.

Elephant in the Emergency Room

So what of the pitfalls in the current model of medical training? In many ways, that’s the elephant in the emergency (or hospital) room: In 2000, the Institute of Medicine, in Washington, D.C., estimated the annual toll from medical errors at between 48,000 and 98,000 deaths; it is broadly accepted that overburdened and fatigued interns are largely responsible.

Jauhar does cite the famous 1984 death of Libby Zion. The eighteen-year-old daughter of Sidney Zion — a lawyer, once Assistant U.S. Attorney for New Jersey, who (like Jauhar) turned New York City writer — Libby died of cardiac arrest after eight hours in a New York emergency room. Her death resulted in a number of changes in New York law regarding the working conditions for medical residents. For example, as of 1987, Jauhar recounts, “residents were prohibited from working more than twenty-four hours at a stretch or more than eighty hours per week.” Eventually, he tells us, these guidelines became more or less national. But they have not been effectively enforced.

In response to the 2000 study cited above, the Accreditation Council for Graduate Medical Education (ACGME) again revised the number of hours interns should be allowed to work. But these guidelines look worse, not better, than the 1987 guidelines: Up to nine times per month, interns can be required to work as long as 30 consecutive hours — and, according to the September 2006 issue of the Journal of the American Medical Association, more than 80% of medical interns subsequently surveyed reported that they were still working beyond those guidelines.

Given the seriousness of the problem, why has this not been more effectively addressed? Jauhar discusses the issue briefly. In response to the 1987 regulations, he writes, “Teaching hospitals that had relied on interns and residents as medical staff were forced to grapple with the problem of cross-coverage: providing care to patients when their primary resident was not on duty.” He writes this in introducing his own rotation as a “night float,” one of the staffing changes meant to address part of this problem. But he quickly moves off any discussion of solutions.

“In the end,” he writes, “I adapted to the culture around me. I came to accept the workings of the hospital and of my colleagues. I became less judgmental — of doctors, not patients (there was a time when it was the other way around) — and more forgiving of, more faithful to, my guild.”

Click here to read an expanded version of this article.