On January 18, five young women filed a class-action lawsuit against clothing retailer Forever 21. More than a juicy court case, this legal action underscores the importance of knowing your rights in the workplace. Teens just entering the workforce need to be aware of these, and they need to teach each other what they have learned. …Read More 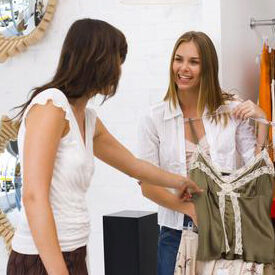 Tiffinee Linthicum and Jazzreeal Jones are like most teens. Not long out of high school, they attend community college in California and have held jobs to pay all the bills that come with independence. Both women began working for chic clothing retailer Forever 21 while they were still in high school. As it turns out, in addition to on-the-job skills, they were also getting a lesson in employee rights.

This week Linthicum and Jones, along with fellow retail workers Jessica Ramos, Shanelle Thompson and Alyssa Elias, filed a class-action lawsuit — a collective action where several people get together and try to fight for something that has occurred to a larger number of people — in San Francisco Superior Court against current and former employer Forever 21.

The lawsuit alleges that Forever 21 required its employees to perform work without compensation and denied them meal breaks. As the lead plaintiffs in the case, the five young women say the company routinely detained them and their co-workers inside Forever 21 stores on lunch breaks and after their shifts were over so that managers could search their bags for store merchandise – a company policy. Forever 21, no stranger to lawsuits (the producer of cheap fashion knock-offs has been sued numerous times for copyright infringement), has not responded to the allegations, although lawyers say it has recently stopped its employee bag-check policy.

The story of Linthicum and Jones is less about a juicy court battle – these types of class actions against large companies are usually tedious and very drawn out – and more about the issue of employee rights. “Sales associates at Forever 21 stores are often still in high school and under the age of 18 when they begin their employment,” says Geoffrey Norton, one of the workers’ lead attorneys with the San Francisco firm Norton & Melnick. “These young people are vulnerable and often do not understand their employment rights. If their rights are being stepped on, they think their choices are to quit or to take it. That’s not the case.”

Employees have the right to be treated a certain way in the workplace. These rights begin during the hiring process and continue until the day an employee leaves the job – and even after in terms of unemployment insurance. According to Workplace Fairness — a Washington, D.C.-based nonprofit organization that provides information, education and assistance to workers and promotes public policies that advance employee rights — the key issues around which workers have rights in the workplace are: appropriate interview questions; discrimination based on age, race, disability, sex, national origin or religion; harassment; pay and hours; benefits; leaves (when you take time off due to illness or other reasons); privacy; health and safety; injuries and illness; whistle-blowing (fighting back when you see your employer doing something wrong); and termination (being fired, laid off or asked to resign).

Employment laws vary from state to state. Employees can often access state-specific law information through government websites – like that of the state Department of Labor – or hotlines. “You should find out your rights in terms of hourly wages, your entitlements in terms of rest breaks, the rules with respect to people under 18,” notes Norton. “You should determine how late you are allowed to work and how many hours you are allowed to work in a week. The reason they have these rules is that kids are supposed to be in high school and doing other things, not just working. A lot of states require employers to post employment laws in a public place. Find them and familiarize yourself with them. If something is being violated, bring it to the attention of a supervisor.”

Once you know your rights, urges Norton, don’t be afraid to take action if someone is abusing them. “The biggest problem is that [employees] can’t step up to their manager and say that they are being abused,” he says. “He or she might say, ‘If you don’t like this job, leave and I’ll find somebody else.’ It’s a buyer’s market out there. There are ways to fight for rights if somebody is not doing the right thing.”

‘Look into the Local Laws and Spread the Word’

Many company human resource departments distribute handbooks detailing company policies. Employees with questions can reach out to their human resource department, if the company has one. Labor union employees can take complaints to the National Labor Relations Board, an independent agency of the U.S. government that investigates and remedies unfair labor practices. Government agencies responsible for governing actions in the workplace are the U.S. Equal Employment Opportunity Commission and the U.S. Department of Labor.

Wronged employees can ultimately seek legal action, at which time, says Norton, they should consult a good employment lawyer. The current class action involving teens Linthicum and Jones shows that “it is possible for the little guy to take on the big guy,” even for small sums of money. “Employment lawyers are out there taking on companies and trying to make the employment life better for all people by making companies comply” with the laws, he notes.

Teens who are just entering the workforce need to be aware of these issues, adds Norton, and they need to teach each other. “If you have an issue, tell your friends what’s going on,” he suggests. “Look into the local laws and spread the word. Call a local employment lawyer and write an article for the high school newspaper with advice from an attorney who knows the local laws. Post the article on your Facebook page. News can spread fast if somebody takes the leadership role, and this is something that is important for all of us.”

Why are teenagers especially vulnerable to employee rights issues?

How can you protect your employee rights?

Do you have an employee rights story? Share it with other teens on KWHS’s Facebook page at http://www.facebook.com/whartonhs