The Retail Rat Race: ‘Tis the Season for Shoppers, Stores and Sales

The official holiday shopping season starts on Black Friday and continues through December 25. This week leading up to the final week before Christmas had analysts buzzing about the season’s retail standings. Are stores going to sell more stuff this year than last or will sales fall flat, given the shabby state of the U.S. economy?…Read More 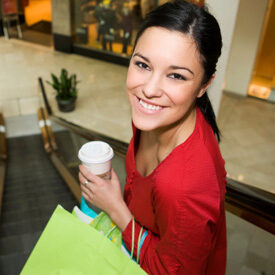 Leave it to a bored teen to get some fun footage. One high school student in Taylor, Texas, caught a bit of the craziness of Black Friday – the day after Thanksgiving that officially marks the start of the holiday shopping season — on camera while waiting in a long line outside a local Toys “R” Us store. As shoppers hurried to their cars with their purchases, Zachary Gonzales, 15, observed that suddenly their shopping carts would stop, refusing to go any further. Gonzales shot video, featured on the local news, of the comical shopper slow-down, caused by a magnetic yellow line that the store had installed to prevent shopping-cart theft.

The official holiday shopping season starts on Black Friday and continues through Christmas. For all involved, the operative word is “sales.” Shoppers want to get great holiday discounts on their purchases, and retailers want to sell, sell, sell. This week leading up to the final week before Christmas had analysts buzzing about the season’s retail standings. Are stores going to sell more stuff this year than last or will sales fall flat, given the shabby state of the U.S. economy?

Seems you can stop shoppers’ carts, but you can’t stop their spending, at least when they are energized by a hearty turkey dinner. According to a report by the National Retail Federation, retail sales in the U.S. holiday shopping season may rise 3.8% to a record $469.1 billion, higher than an earlier forecast. Shoppers reportedly flocked to malls and websites over the weekend following Black Friday, spending a record $52.4 billion, a 16.4% jump over 2010’s sales figures.

But was one weekend enough to make a winning retail season? The International Council of Shopping Centers said this week that consumers had about 65% of their holiday purchasing done as of the second week of December 11, slightly higher than last year. Analysts warn that retailers might not have much more money to spend. What’s more, stores are offering heavy deals and free shipping online, which will likely hurt the amount of profits retailers can make.

A recent Motley Fool article looked specifically at the health – or lack thereof – of teen retailers this holiday season, noting, “discounts are running rampant throughout the sector.” Aeropostale, for one, was offering a 60%-off sale on Black Friday. “This speaks to the overabundance of inventory that many teen retailers are suffering through and is another reason I anticipate margins [what you charge for something compared to what it costs you to produce it] will suffer,” wrote the article’s author, Sean Williams, who also looked at earnings results for Guess?, American Eagle Outfitters, Gap and Abercrombie & Fitch. Big discounts, coupled with rising raw material costs (think cotton), led Williams to conclude, “It’s not going to be a jubilant year for teen retailers.”

But by no means are all cash registers clogged with coal. Since November 1, online sales are up 15% over last year, and this year’s “Cyber Monday” – the Monday following the traditional bricks-and-mortar “Black Friday” – had a record $1.25 billion in purchases. In fact, single-day online holiday shopping sales have exceeded $1 billion five times already this year.

And if these types of results lead you to envision a world of vacant store aisles and eager couch-bound shoppers, you may want to reconsider that image. According to this week’s Knowledge@Wharton blog, “Retailers: Know Thy Customer – by Channel,” a new report by Wharton’s Jay H. Baker Retailing Center and marketing consultancy Verde Group says that 76% of purchases are still done the old-fashioned way – at a store. For people who are so-called “experiential bricks-and-mortar shoppers,” shopping is ultimately about social interaction – the kind you can’t get on Facebook.