Student Essay: Landing a Summer Internship with Formula One 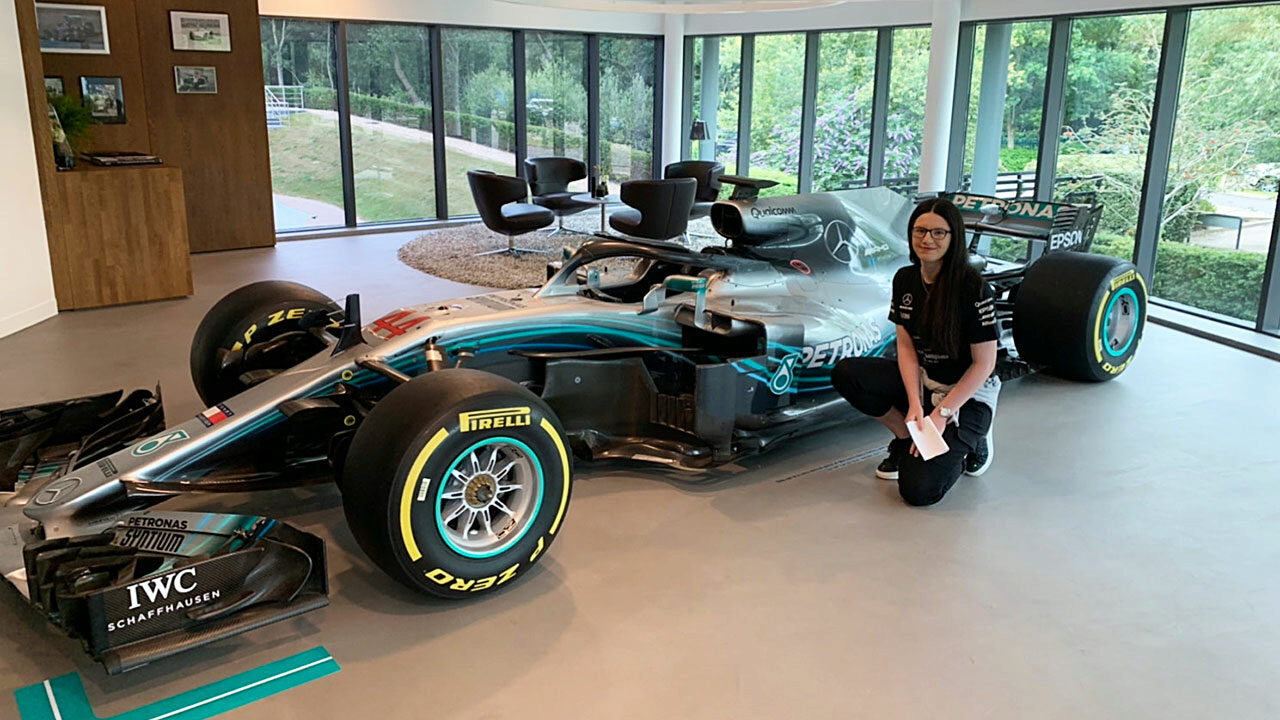 Cristina S. is a high school student from Romania who attended the Wharton Global Youth Summer Program in entrepreneurship in 2019 (then called the Global Young Leaders Academy). Cristina says that her time at Wharton “made me realize that at the end of the day we are all powerful beyond measure. With a great mindset, approach and environment, we can unlock our potential and live our lives to the fullest.”

With that, she reached out to Knowledge@Wharton High School to share the story of her business passion. In this personal essay, Cristina recounts her track-side experience with the industry of her dreams: Formula One racing.

Formula One auto racing is a sporting spectacle that I have trouble expressing in words — and not because the sport is hard to understand, but because of the effect it has on me. The start of the race is the moment I feel most alive. My heart is beating like never before, and there is a rush of emotions flowing through my veins electrifying every single cell in my body. My heartbeat synchs with the ramped-up engines. I embrace and harness that energy!

‘I Would Give Anything to Learn’

How did I get this great opportunity – really the chance of a lifetime for me? For starters, I made sure I was at the right place at the right time. You see, I had met Toto briefly in 2017 and then I returned to the same hotel in 2018 during a racing event in hopes of running into him again. I was on a mission to somehow get involved in the Formula One industry.

Sure enough, Toto entered the hotel carrying his luggage. Before I could process that he was walking through the door, I found myself standing up and approaching him. He spotted me and started smiling. He remembered me from the previous year. In the moments I had with him, I showed him what I had been working on, from strategies to stories and graphics about Formula One.

Toto seemed happy with all the effort I put into my work. At one point, my mother called my name so I would finish up and let Toto check in, but Toto told her to let me continue talking. After a few more minutes of chatting, I asked him if I might have a chance at interning for the team. I wanted to be straightforward and honest with him, so I said, “I don’t know a lot, I really don’t, but I would give anything to learn.”

“If there is one thing you should take away from my story, it is that you should never limit your opportunities.” — Cristina S.

I’ll never forget his response. He said, “I can see the passion in your eyes. You don’t have to know everything, you just need the desire to learn.” He gave me his business card and said, “Send me your CV and we’ll go from there.” I stood there, holding on tightly to that card, trying to process what had just happened. I was one step closer to my dream internship!

I got home and started working on my CV (which is a Curriculum Vitae, or résumé). Eager to make it stand out, I created it in a video format. It was an F1 circuit with the Mercedes F1 car going around the circuit and stopping at certain points on the track, offering information about me and my studies. I sent it in and one month later I got the news. I was invited for a week-long internship to learn how the support team operated.

My work experience began in July 2019 during the British Grand Prix, the Formula One home race of the Mercedes team that took place at the Silverstone Circuit in Silverstone, United Kingdom. On July 14, the morning of the race, I was greeted by the race support team leader, Dom, and my supervisor, Rosie. They were both incredibly welcoming, showing me how I should transcribe radio messages throughout the race. My supervisor also showed me around the factory where the race support team works behind the scenes to monitor competitors and the team race car. This was very emotional and meaningful because everything I saw on the internet was in front of my eyes at that moment.

Our team’s Mercedes F1 driver Lewis Hamilton won the British Grand Prix! Celebrating in a room full of people who dedicated their lives to their passion was truly inspiring. The next day, I got the chance to attend a meeting with all the staff in the factory. It gave me an excellent insight into how the team operates and how they extract lessons from each race. For many years, I had been searching up pictures from these meetings, so to actually attend one was an honor.

The following week, I underwent a deep learning curve where I discovered a lot, not only about the particular work I was doing, but also about the organization and how they function and their principles. I also got to engage with people from different departments and countries and saw how working with diverse teams could lead to performance.

If there is one thing you should take away from my story, it is that you should never limit your opportunities. I had the courage to approach Toto Wolff, even though I didn’t know how he would respond to me – and a few minutes later I had his business card and a potential internship. I dared to dream that I would spend part of my summer with the Mercedes F1 team – and, with perseverance, it happened.

What did you learn from Cristina about taking initiative and having courage to follow your dreams?

2 comments on “Student Essay: Landing a Summer Internship with Formula One”