Roberto Alvarez de Lara is living the dream. After five years working as a programmer with one of the best video-game design studios in Spain, he founded his own Madrid-based company, Over the Top Games. In April, the company came out with its latest creation, The Fancy Pants Adventure, and hopes to continue generating new products every year. While outside experience is very important, says Alvarez de Lara, the best video-game designers begin at home. …Read More 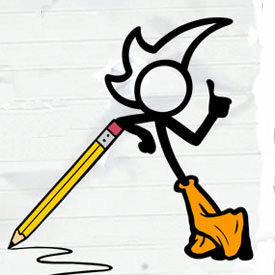 The world of video games is not all about the fantastic environments or the personalities who enjoy superpowers and special abilities. Behind all this activity are the ordinary people who design, program, correct ‘bugs’ and launch projects aimed at creating audiovisual entertainment. One person who knows that very well is 26-year-old Roberto Alvarez de Lara. Alvarez de Lara and his three partners run Over the Top Games, an independent studio founded in Madrid in 2008. Their goal is to fulfill the dream of Alvarez de Lara’s childhood — to produce amusing games that have no creative limits.

The company, which has 12 employees, released its second creation in April. Known as The Fancy Pants Adventure, it is a remake of a well-known game of the 1980s, using the ‘Flash’ format. [As in earlier versions of the game], its main character is a stick figure who wears yellow pants. The game is available for downloading on the online platforms of the PlayStation Network and Xbox LIVE Arcade, and is distributed by Electronic Arts (EA), a huge U.S. game publisher. Knowledge@Wharton High School spoke with this Venezuelan, who moved to Spain when he was 12 years old, about his career and the qualities you must have in order to devote yourself to this industry.

Knowledge@Wharton High School: How did you start out in this industry?

Roberto Alvarez de Lara: Ever since I was little, I have liked video games. The first time I tried Atari 2600, I knew that was what I wanted to devote myself to. At the beginning, you are interested only in playing, but over time you get more and more interested in knowing how to create video games.

Because I had a computer, I learned to program and to make little experiments and small video games. I was about eight years old. I took advantage of every opportunity to make a game or a program. In my last year of high school, when we had to present a report at the end of a course, my best friend and I made an educational game about learning chemistry. It was very successful among the students, and we had a lot of fun developing it.

Then I worked for five years as a programmer at Pyro Studios, one of the best-known studios in the sector in Spain. That’s when I acquired some very important experience by working with people who were really well qualified. I recommend experiences of this sort to anyone who wants to devote himself to this [career]. I had training I could rely on but working there, all sorts of things come up that surprise you. Without that, I believe I would not have had success in taking the leap and creating my own company.

KWHS: When and why did the idea come up for creating your own company? What were your main challenges?

Alvarez de Lara: I first got the idea when I was very small. I have always wanted to be able to make games that have no limits when it comes to creativity — to be able to create our own worlds, characters and stories.

My little brother, who currently works with me at Over the Top Games, has also been the source of a lot of inspiration. He has followed in my footsteps. The two of us have always been on the same wavelength [when it comes to video games], so when I created the company, he was one of my partners. My brother gave me a sense of security when the company was created since he is a person I trust a great deal and he is also very good when it comes to being an artist. The truth is that when you have a good team, things are easier.

Without any doubt, the hardest thing was to find financing. But, on the other hand, you don’t have to give up and wait until you have [financing] before starting your business project. The money comes more easily once operations are already taking place, since that gives more confidence to those who are looking to make investments [in your company].

KWHS: In April, you brought out “The Fancy Pants.” How has Over the Top Games evolved in the few years of its existence? Where do you want to be in another five years?

Alvarez de Lara: The studio has been growing, little by little, and we have formed a great team of people who love what they are doing and contribute lots of value for us. Every year, we are launching games, and that is important. Finishing a project is always very hard. Let me explain what I mean: At the start of a project, you are more excited and have more ideas and so forth, but in the final stages, when only between 10% and 20% remains to be developed, that’s when all your problems mount up. For example, in our last project, we realized that the “game experience” was very difficult, so we devoted another two or three months to improving it to make it easier.

[Where will we be] in five years? I hope we bring out at least another five games! I’d like Over the Top Games to get a good reputation for its products, and have people enjoy our games.

KWHS: What direction is the video game industry moving in? What types of skills will people need to have if they want to devote themselves to it?

Alvarez de Lara: Games are getting bigger and bigger, so you need more development time, bigger and more ambitious budgets, and more and more skills. In the past, when you created a character, all you needed to do was model it and give a texture of color. Nowadays that is not enough. We have to create specular maps [which have to do with the shininess and color of a surface]; relief maps [which show a multi-dimensional representation of terrain]; and normal maps — you have to learn more things. But there’s no reason to get frightened, because the tools that we use are better and easier [than before].

KWHS: What skills do you look for when you hire people for your company?

Alvarez de Lara: First, a passion for video games. You have to like this, since you are investing a lot of hours in projects. I’ve realized that those people who enjoy what they are doing are giving 200% when they create a video game. Second, you need to be self-taught. You have to like to do things in your home — games, models, animations. Third, you need to know how to work in a team. In our studio, the top concern is the people who form the team, so the main thing is for all of us to help one another.

KWHS: What lessons have you learned from your experiences that can serve as examples for young people who want to become entrepreneurs in this sector?

Alvarez de Lara: That it is very important to feel passion for what we are doing. Making video games is a job like any other, but let’s not deceive ourselves. The experiences that we have while we are creating a video game are unique and enriching. Nothing can compare with the team atmosphere and the incredible satisfaction that you feel when you see your games on the shelves.