If you like World Cup soccer, then you might want to learn more about another lesser-known sport -- Ultimate Frisbee. Sports is a big money maker around the world, and this game is quickly growing in popularity. In this audio podcast, KWHS talks with a high school Ultimate player about the appeal of the disc. …Read More 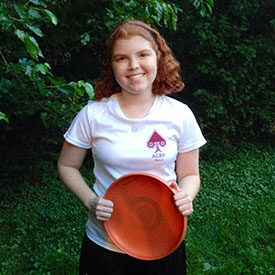 Captivated by the World Cup these days? So are we — in fact, so are lots of devoted soccer fans. Motivated by a sports-obsessed culture, Knowledge@Wharton High School decided to explore a lesser-known sport that shares some characteristics of soccer and is growing in popularity — Ultimate Frisbee. This month, The Christian Science Monitor featured an article about the sport, saying it “combines the passing and running of soccer, the strategy of football and the agility of basketball.” Since 2008, the article notes, player participation on USA Ultimate- affiliated teams among 13-to-18-year-olds has more than doubled.

Rachel Winicov is one of those players. The 15-year-old, a rising junior at Lower Merion High School in Ardmore, Pa. (who also spent some time as a KWHS intern this summer), competes on the Lady Aces, an Ultimate Frisbee team that won the 2013 and 2014 Pennsylvania High School Ultimate State Championships. Winicov sat down with KWHS to talk about her passion for the disc and why her coaches always say that the best Ultimate players are not the fastest or strongest on the field.

Rachel Winicov: Thank you for having me.

KWHS: What is Ultimate Frisbee?

KWHS: How did you get interested in this unique sport?

Winicov: I was attracted to Ultimate because instead of having referees at games, Ultimate players govern themselves with this idea called “the spirit of the game.” The spirit of the game means that players are expected to respect themselves, their teammates and their opponents and make calls on themselves. For example, I was playing a game and I caught the disc out of bounds, in which case you’re supposed to turn the disc over and lose possession. Except in this instance, no one had seen that I was out of bounds. So, theoretically I could keep playing like nothing had happened. But with this idea of the spirit of the game in my head, I decided to turn the disc over and get on defense.

KWHS: It sounds like you have to be a trustworthy player, but what are some of the other qualities that make a good Ultimate Frisbee player? And what has helped you to be successful in the game?

Winicov: Our coaches always tell us that the best Ultimate players aren’t the fastest or the strongest on the field. The best players are often the ones on the sidelines cheering for their teammates when they make a good catch or picking them up after they miss an important throw. I think these qualities have made me successful in Ultimate — the compassion and the caring about spirit in the game.

KWHS: How does work on the field translate to life outside of Frisbee? Do the skills you learn from Frisbee help you in other aspects of your life?

Winicov: I think everything that I learn in Frisbee helps me outside of Frisbee. Our coaches teach us to be caring to others and put others’ feelings before the result of the game. For example, I was running for a student government position this past spring and a girl approached me. She said, ‘Hey, Rachel, I really want to run against you but I don’t want to hurt your feelings. Would you mind?’ Of course, in my head I was thinking, ‘No, don’t run against me. I want to win.’ But I was encouraged by the spirit of the game to say, ‘No, of course you should run. I think you would be a really good leader if you beat me.’ So, sure Frisbee helps me outside of the field.

KWHS: It sounds like [it’s helping you to develop] leadership skills. I’m going to throw in another [related] question. What about thinking about how it translates to business? We [featured] an article on Knowledge@Wharton High School where we compared being a chess player to being in the business world and learning to be strategic — your move, my move, negotiating. What are some things from Frisbee that you might see could help you as a business leader, as well?

Winicov: Business is [not just about] money, of course. Business is about interacting with other people. [tweetthis alt=”” hashtag=”” url=””]Frisbee teaches you not to be so self-centered in your way of trying to win. Winning happens by cooperating with a team of people and even your opponent sometimes.[/tweetthis] I think that really could translate to the business world.

KWHS: What is your favorite memory from Ultimate Frisbee?

Winicov: One time I was playing a scrimmage for the Junior Varsity team that had no importance on our standings in the tournament. One of the newer players came up to me and said, ‘Rachel, I’m really nervous. What if I mess up?’ JV games are heavily controlled by the better players, who sometimes play for Varsity. But today at that game, I decided to focus on making sure everybody got the disc and everybody got equal opportunity. And the game, while we were successful, was more important because we had a good time. The girl who was initially nervous came up to me afterwards and said, ‘Wow, Rachel, that was so much fun. I wish we could do that again.’

KWHS: What advice would you give to someone who is thinking about playing Ultimate Frisbee?

Winicov: I’d tell them to go after it. Everyone should play Ultimate Frisbee because it’s so welcoming. [tweetthis alt=”” hashtag=”” url=””]When I started playing, I couldn’t even throw a disc properly or make any catches.[/tweetthis] Everyone’s just so welcoming and [encouraging] to [anyone who wants to play]. Nobody really knows how to play Ultimate Frisbee when they start, and that’s what makes it such a unique sport.

KWHS: [Do many high schools] have teams?

Winicov: No, not every high school has a team, but it’s growing. There is a lot of inter-school competition now.

KWHS: How do you think sports like Frisbee can create a positive social impact? Can Frisbee help communities? I guess it brings you together, but what are some of the other ways?

Winicov: It can have a tangible effect on communities. For example, Philadelphia’s professional Frisbee team, the Philadelphia Spinners, hosts charitable clinics where they teach middle school and high school students to play Ultimate and encourage them to get active and lead healthy lifestyles. I think that’s having a good social impact. Also, teams have food drives and such where they can donate to charities.

KWHS: As Ultimate continues to grow, what do you think the future looks like for the sport?

Winicov: I think the future is pretty bright for Ultimate Frisbee. [tweetthis alt=”” hashtag=”” url=””]I don’t know exactly where it’s going, but it’s getting bigger every day. I know I’ll be waiting with a disc wherever it takes me.[/tweetthis]

Winicov: Thank you for having me.

Why do you think our culture is obsessed with sports?

What is “the spirit of the game” in Ultimate Frisbee?

Research some of the KWHS articles in the Related Links section that connect sports to social impact. Given some of the unique aspects of Ultimate, can you think of other ways it might have a positive social impact around the world?