As vice chairman of the Sun Group, Shiv Khemka has led his global company through many difficult situations – all the while able to fall back on his own deeply rooted value system. In this podcast, Khemka talks to Knowledge@Wharton High School about why it is important to start focusing at a young age on principles and leadership.…Read More 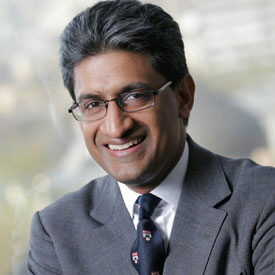 Shiv V. Khemka is vice chairman of the SUN Group, an investor in emerging economies such as Russia, India and the Middle East. Khemka, who has held many leadership roles throughout his life, talked with K@W High School about why it is important as a teenager to start nurturing values that can serve as guiding principles.

Knowledge@Wharton High School: Why are values important in leadership, Shiv? And why is it important to nurture them at a young age among high school students?

Shiv Khemka: When you look at the world today, you look at problems all over the world that are confronting the next [several] years of our life – 20 years, 30 years, 50 years – whether it is climate change, integration of global economies, migration – all kinds of issues. If the next generation of leaders who are at schools do not have the values to think globally, to think about us all being in the same boat together and [to have] a perspective that is about all of us winning together and solving the world’s problems, the world faces very, very serious challenges. Therefore, it is very important to focus on values and leadership at a young age because you can develop traits to bring out the quality and capacity of leadership that is needed to deal with the problems ahead.

KWHS: In practice, I think the challenge that sometimes comes up is that even though young people at an emotional level may accept the need for values, they are confronted with real situations that make it hard for them to act in those kinds of ways. What are some of the challenges [related to this] that you have faced in business, and how can students deal with them?

Khemka: I think in business, or in life in general, you are confronted with moral choices as you go along, and you have to look back into your own value system, foundations and roots and think about what you are comfortable or not comfortable doing. Making those choices means that you make sacrifices. You don’t always get the things that you want, but you don’t compromise your … values and your core integrity and authenticity. As a businessman, I face many such challenges. But I have always tried to live by the values I consider important.

Those values have helped me navigate often very difficult situations with wisdom. It is very important for young people to understand the theory, but it’s not just about the theory. It’s actually about the practice. By alerting them to the issues [involving] practice early on in life, then the little things that they do will be beacons guiding them and helping them build the strength to deal with the real world as they confront more and more challenging issues through their lives.

Khemka: I left India for boarding school when I was very young and ended up at a British boarding school called Eton when I was 13. I spent five years there. In my first year, I faced quite a difficult time being from a different culture and not being used to a boarding school system. Honestly, one of the things that helped me a lot at that time was reading Gandhi’s autobiography, The Story of My Experiments with Truth, where he had to deal with racism and search deep within himself for the reserves of tolerance to be able to deal with that racism. I, in my own small way, did the same thing. I looked upon the bullying and other things I faced at that age with as much strength and tolerance as I could muster.

I learned that behind that veil of ignorance, which is really what [motivates this behavior], lies a human being. If you can penetrate through to that human being, then you are sharing a common platform. That common platform is based on trust, friendship and many other things. Some of the people who bullied me became very good friends of mine. I learned that leadership is very important at a school like Eton where 22 or 23 prime ministers, including the current prime minister of England, [studied]. There is a continual focus on leadership. You are judged not just by your academics or your performance on the sports field, but by your ability to lead – whether it is a team, a class discussion or anything else. That left a very strong impact on me because the importance of leadership is often de-emphasized. At the end of the day we have had leaders like Stalin and we have had leaders like Gandhi. The question is, “What has differentiated them?” I think the values with which they led have differentiated them.

KWHS: You have done business all over the world, including places like Russia, which sometimes resembles the Wild West in terms of the way business is carried out. Could you give an example of an ethical dilemma you may have faced and how you resolved it?

Khemka: The first thing I would say is that living in Russia for the last 20 years was often very challenging, but after five years at an English boarding school, it wasn’t that hard. In terms of specific ethical dilemmas, you face many as you do business. If you are willing to be a little bit patient, if you are willing to accept potentially lower rewards by sticking to your values, if you are able to spend the time developing the relationships and if you are persistent enough in trying to convince people that what you are doing is value additive to their economy, their region or their company, then you can often make huge strides.

Of course, it is difficult. It is not always rewarding. You often find roadblocks. And you have to, at the end of the day, make the decisions that allow you to sleep at night. That is very important – at least in my life.

The other thing I would say is that shining a light, bringing transparency to things, often makes those things dissolve. An example is [when] some people, in order to give [our company] a license to perform something, asked for us to compensate them. They were government officials and we decided we didn’t want to do that. By just shining a light on that process, by making it more public and getting a broader group of actors into the decision and by explaining why what we were doing was good for our investments, the [financial] demand from these people melted away. They realized that it was not defensible. That has been a core methodology for us of trying to shine a light on something – bringing transparency so that enough people understand why it is important. The people who are trying to extract an economic rent out of that particular situation often realize that it is a battle not worth fighting.

KWHS: What advice would you give to high school students who want to nurture the principles of value-based leadership within themselves?

Khemka: The greatest thing you can do is to develop and nurture the values that you believe in, of which I believe contribution is critical – not just thinking about your own career and your own microcosm of life, but contributing to a broader world situation. Then [you need] the tools and the leadership to go along with that so you can make a difference. It’s all about practice. It’s all about emulation. It’s all about role models. It’s all about looking at other people whom you admire and respect and trying to see what they did right. What can I learn from their life that I can put into practice in my life?

At the end of the day, practice is what it’s about. And if you want to contribute to society, start contributing early. It doesn’t matter if you are contributing in a small way at the moment, and it’s not just about financial contribution, it’s about contributing your time, your energy, your effort, your intellect and your spirit. If you do that, time and time again that capacity to contribute grows, [as does] leadership. As you lead, the capacity to lead grows. The world will benefit greatly from leaders who are able to combine both great leadership qualities as well as great values.

Six Money Moves for Your Future