Who says eco-friendly fashion has to be dull and earth-toned? Young, hip designer Kate D’Arcy, who got revved up about business as a teen in her parents Harley Davidson store, is proving that organic fashion is more than friendly to the environment -- it’s stylish, too. …Read More 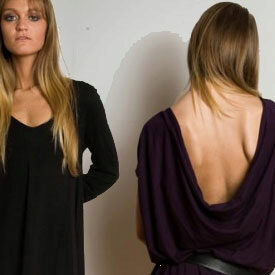 As a high school student, Kate D’Arcy fantasized about a career in fashion, but she figured it was just that — a fantasy.

D’Arcy studied communications at Shippensburg University, but after college that love of fashion was as strong as ever. So she began working as a stylist and personal shopper on the side. Stepping into other people’s closets, D’Arcy found a common problem: They were missing a few essential pieces in their wardrobes. “I realized it only takes a few basic cuts to make your closet work,” she says.

But she didn’t set out to become America’s Next Top Eco-designer when she started designing clothes. D’Arcy just wanted to provide fabulous clothing — basics that could be accessorized to match an individual’s personality. Along the way, she discovered she could also help customers feel good about what they were wearing by going organic, and it didn’t mean whe would have to settle for less money.

Most fashion isn’t very eco-friendly. A large chunk of the world’s pesticides and insecticides go into the production of conventional cotton. Organic cotton and other sustainable fabrics, on the other hand, are grown using methods that have a low impact on the environment. And Toggery emphasizes business ethics as well: Its apparel is made in the United States at a factory near D’Arcy’s hometown, where the employees are guaranteed fair wages and working conditions.

This young designer knows a hot fashion trend when she sees one: D’Arcy is now riding high on the chic organic-clothing wave at a time when eco-fashion is way in style. Major clothing retailers like H&M and Target have recently rolled out organic fashion lines. And Project Runway’s fifth-season winner, Leanne Marshall, says that about half the fabrics she uses are sustainable.

D’Arcy was first turned on to organic fabrics by a clothing manufacturer in her home state of Pennsylvania. The company sent the young designer some fabrics, including bamboo knits (made from bamboo) and 100% organic cotton. Once she saw them, the decision was easy.The touch was amazing,” she recalls. “There was no real difference in quality, so I thought ‘how can I turn away from it?’”

But beyond a call from her conscience, D’Arcy, who comes from a family of small business owners, saw opportunity. She did market research and found no contemporary brand out there that offered organic clothing at reasonable prices. There were also a lot of misconceptions about organic clothing. “If it’s organic, it’s probably overpriced, or very dull, earth-toned,” she says, voicing stereotypes about organic fashion.

And so D’Arcy began designing wardrobe staples that were affordable, ranging from $30 to $150, in great colors. She sought out mainstream contemporary boutiques, rather than focusing primarily on eco-boutiques: She wanted her clothes to be labeled, first and foremost, as great fashion, not just great for the planet.The fact that it’s organic and sustainable should be an added bonus,” D’Arcy says of her designs.

D’Arcy launched her first line, “Katherine Jessica,” at age 24, going to night school to learn clothing construction and sketching. The initial project was lean: She offered one dress style in a variety of colors. But the fledgling business was a crash course in how to promote a label and how to attract buyers. And D’Arcy, who grew up working in her parent’s family-operated Harley Davidson store, liked having ownership over her own business. “Business is business,” D’Arcy says. “If you can learn [that concept], then it’s just a matter of what you’re selling.”

D’Arcy showed her initial Toggery collection in October of 2006 in a New York City showroom. She has now hired new associates and added a showroom on the West Coast. The Toggery line is sold in more than 100 boutiques around the country.

She sees an opportunity to be the organic brand within the industry. And beyond expanding her clothing collection to include a men’s line, due out this spring, she eventually plans to offer bedding and make Toggery a full lifestyle brand.“This label is like my child,” D’Arcy admits. “I feel like the sky’s the limit.”

It’s taken plenty of hard work, but D’Arcy has finally realized her high school fantasy. “Sometimes you need confidence in yourself,” D’Arcy says of turning her dream into reality. “You can do it. I’m proof of that.”

Solar Eclipse: What Happens when Your Startup Fails?