We are all excited about the upcoming Super Bowl game to determine the best football team in the NFL. But it seems that students – including high schoolers – are donning their cleats for an entirely different sports experience these days – Ultimate Frisbee. Knowledge@Wharton High School sat down with Tom Crawford, CEO of USA Ultimate, to talk flying discs and the spirit of sportsmanship.…Read More 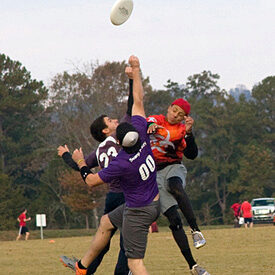 Tom Crawford is the CEO of USA Ultimate, the Colorado-based governing body of a sport – Ultimate Frisbee — that hit the scene when a student at Columbia High School in Maplewood, N.J., invented it in the late 1960s. The fringe sport – often referred to simply as ‘Ultimate’ — now involves more than five million players. Although the rules of the game are specific, Ultimate is more defined by its players following “The Spirit of the Game,” a sportsmanship credo that Crawford believes sets Ultimate apart from other sports. “The Spirit of the Game” is essentially based on the Golden Rule: Treat others as you would want to be treated. There is no heckling, taunting, tackling or blocking in what is essentially soccer or football with a heavier-than-normal Frisbee.

Crawford, a participant in the recent Ivy Sports Symposium held at the Wharton School, talked with Knowledge@Wharton High School about Ultimate Frisbee’s growth and appeal.

Knowledge@Wharton High School: What is Ultimate’s audience? Who plays it?

Tom Crawford: We are huge on the college scene. We now have 750 colleges and universities competing, at least on the club level. We hold championships every May, and big and small schools win in about equal amounts. Kansas has won and Stanford has won a lot, but our Open winner this year was tiny Carleton College in Minnesota. [Ultimate] is tied into the fabric of the school there. I am told that for many years, every member of the freshman class gets a disc when they are at orientation. Ultimate is that kind of thing. We are told that it is now the most popular sport on college campuses.

KWHS: Does Ultimate compete with long-established sports like football and basketball in traditional high schools?

Crawford: Given the target audience of college students, it is not surprising that we are seeing more and more high school teams taking off. There are now championships in 25 states, and we are adding two or three states every year. We are also seeing more soccer, football and basketball athletes using Ultimate as their second sport. It uses all the same skills and gives them something different to do in their “other” season. And now the colleges that take it seriously are recruiting high schoolers.

KWHS: How does “The Spirit of the Game” set Ultimate apart from other sports? How does it make it more attractive to young people?

Crawford: It is a very cool community. You have to be in really good shape — it requires speed and quickness — but you play because everyone is welcome in the community, whether they have never played before or are big stars. There is no old-time jock mentality. There is a mutual respect for everyone who plays, and that guiding force is important to the whole Ultimate community.

In fact, most games, even tournaments, have no officials, no referees. Sometimes we have “observers” if there is some big disagreement, but the point is you just trust your opponents to call things the right way. For parents, we think this is the kind of sport they should want their kids to play — you can be a great athlete, but also be part of something really team-building. The point of the game is to play hard, negotiate and work out differences. Perhaps that is why it has such a great attraction in the Ivy League – every Ivy school has qualified for a championship. And although we have a women’s collegiate championship, the other one is called “Open” so if women are good enough to play with men, there is no barrier to them doing so.

Crawford: The Sporting Goods Manufacturers Association says that Ultimate is its fastest-growing segment for equipment. As more players are leaving colleges, they are forming more and more clubs, and we now have a club championship every October in Florida, with most teams [involving] players in their 20s and 30s. It is going worldwide, with more than 50 countries in the World Flying Disc Federation. We feel the appeal of “The Spirit of the Game” may be just the way great athletes want to go right now.

Want to comment on this article? Answer one or more of these questions in the story’s comment section to start the conversation:

Do you consider Ultimate Frisbee a sport? Why or Why Not?

What do you think is the appeal of “The Spirit of the Game” in today’s competitive sports landscape?

Why are sports like Ultimate Frisbee important to business and the global economy?

Do you play Ultimate Frisbee? Share your story and the skills you get from the game on KWHS’s Facebook page at http://www.facebook.com/whartonhs.