If you crave shows with originality, creativity and even a little cheese factor, chances are you have discovered web TV. The process of creating a web TV series is very different from that of network production. Here’s a look behind the scenes of shows made exclusively for online distribution.…Read More 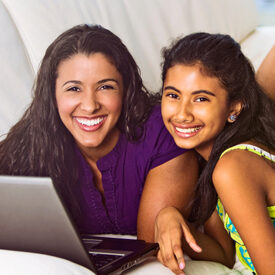 Web TV shows have been around for almost two decades, but in the last few years their popularity has exploded as the technology to produce them gets cheaper and more people are able to access broadband Internet at home. Some of the most popular web-based TV shows include “The Guild”, about a group of online gamers; “Dr. Horrible’s Sing-Along Blog,” a show about an aspiring super villain; and “Quarterlife,” about a group of twentysomethings creating a life for themselves.

These are only a sampling of the countless online shows that are available. Internet TV show fans, like Taylor Davis, 16, a junior at West Vigo High School in West Terre Haute, Ind., say they watch the programs because of the variety. “You can always find something you like on the Internet,” says Davis. “They’re more original, and you can get into them better. TV just gets repetitive.” Among Davis’s favorite web series are “The Nostalgia Critic,” featuring comedian Doug Walker; “Atop the Fourth Wall,” with host Linkara reviewing comic books, and “The Angry Video Game Nerd,” featuring game reviewer James Rolfe.

Web series can also be a family obsession. Jennifer Moyer of Springfield, Va., is a huge fan of “Dr. Horrible’s Sing-Along Blog,” which she watches with her son, daughter and husband. “The appeal is that it is relatively short, the cheese factor is off the charts and the songs are really clever,” notes Moyer. “We ended up getting the soundtrack and now the kids know all the words to the songs. We are dearly hoping that the Whedon brothers [the show’s creators] get bored again and do a part two.”

The Tale of Independent Financing

The process of creating web TV shows is very different from that of network production. Web series typically have only a few cast and crew members, and less money to spend on things like costumes, sets and special effects. The shows are usually shorter, often less than 15 minutes long, and they can appear on the web at any time of the week.

Omar Becerra, 29, is the creator of the web show “A Perfect Union,” which is set and filmed in Corpus Christi, Tex. The show is a conspiracy thriller about the Battle of the Alamo and the hidden history behind Texas’s fight for independence.

Becerra has planned 12 episodes of the show, each lasting about 10 minutes. He is responsible for most of the behind-the-scenes work, including writing, directing and editing the footage. Two or three other people help out behind the scenes, and the actors are all locals. No one gets paid for their time. “From talking with people on other shows, it’s not an uncommon tale,” he says. “I’ve encountered other people who say it’s all volunteer work. A lot of web shows are independently financed, and until big companies and studios start to wise up and see the potential, that is the tale for web series.”

While Becerra uses his own money to make the show, he was able to get hooked up with a website called Koldcast, which is hosting the series online and handling the promotion and advertising. Koldcast is one of several companies that host web shows; creators can also throw their episodes up on sites like YouTube, but then they have to get the word out about them on their own. Other well-known web television networks are Hulu and Blip.tv.

Becerra gets a share of advertising revenue based on how many times people watch an episode. While Becerra didn’t want to say how many hits the show is getting, he is so far satisfied with the outcome. “If the show made $10 over the course of its run, I’m not going to be upset about that,” he says. “I’m very happy with the amount of hits we’ve been getting. I really didn’t know what to expect.”

Watered Down and Changed

Although Becerra is proud of his show’s indie cred, other web series have become popular enough to get more financial backing. One of them is “The Mis-Adventures of an Awkward Black Girl,” a comedy that follows a woman, J, and her friends as they navigate through life.

Issa Rae, the show’s star, chief writer and creator, started the series in February 2011 and has received a great response from fans, with each episode getting 180,000 views. It was initially funded out-of-pocket, but Rae and her team recently raised $56,000 to finance the show through Kickstarter, a fundraising website for artistic projects. (Editor’s Note: Language used in “The Mis-Adventures of an Awkward Black Girl” is inappropriate for younger viewers).

Rae says the show is a success, but she is not eager to move it to a TV network. “I think that if you’re going to create something for the web, then it should be for the web,” she says. “Part of the issue with the transition from web-based content to television is that a lot of it gets watered down and changed in the process. It becomes something that the original web-based audience doesn’t recognize anymore.”

Even though the popularity of web shows is growing, it is not replacing TV viewership, at least not yet. A survey of 1,500 people recently commissioned by Blip.tv found that more than half of web series video viewers say they still tune in regularly to watch prime-time television. The poll also found that Blip.tv viewers are watching less prime-time TV than they used to. Still, Rae doesn’t think big TV companies will be rushing to buy a lot of Internet shows anytime soon. “I don’t necessarily think that there is an excessive demand for web series in particular, but there is a demand for diverse, original content,” she notes. “Network television isn’t tapping into its minority audiences in the right way. The web is a place for minorities to create outside of the limited box of television.”

5 comments on “The Battle of the Alamo, an ‘Awkward Black Girl’ and the Rise of Web TV”