Malala Yousafzai and the Global Fight for Gender Equality

The U.S. government is back in business, which means they can turn their attention to other pressing matters, like the Girls Count Act 2013, a piece of legislation that will help implement a nationally recognized proof-of-birth system in developing countries. With 16-year-old Malala Yousafzai in the lead, many people this week have been celebrating the advancement of girls around the world.…Read More 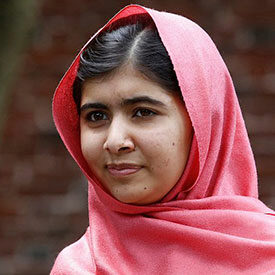 Now that the U.S. government is officially back in business and a deal has been struck to raise the debt limit, some of us can catch up on compelling news of the past few weeks that somehow got eclipsed by political squabbling and the debt ceiling debacle.

Knowledge@Wharton High School was especially taken with a teenager in the spotlight: 16-year-old Malala Yousafzai. Maybe you caught her appearance on Jon Stewart’s “The Daily Show,” an interview that quickly went viral when Yousafzai, a Pakistani advocate for women’s rights, told Stewart how she reacted when she learned that the Taliban, an Islamic fundamentalist political movement in Afghanistan, wanted her dead.

Here was Yousafzai’s response: “I used to think that the Talib would come, and he would just kill me. But then I said, ‘If he comes, what would you do, Malala?’ Then I would reply to myself, ‘Malala, just take a shoe and hit him.’ But then I said, ‘If you hit a Talib with your shoe, then there would be no difference between you and the Talib. You must not treat others with cruelty…. You must fight others but through peace and through dialogue and through education.’ Then I said I will tell him how important education is and that ‘I even want education for your children as well.’ And I will tell him, ‘That’s what I want to tell you. Now do what you want.’”

These views, and her personal mission to speak out for the rights and education of young women, are why Yousafzai — who was shot in the head by a Talib fighter when she was 14 — became the youngest nominee for the 2013 Nobel Peace Prize. On October 11, Yousafzai learned that she did not win the Prize. Even so, the teenager is destined for great things, and is the embodiment of that for which she advocates: the empowerment of women around the world.

Yousafzai’s time in the headlines this past week shed even greater light on a global movement that celebrates the advancement of girls. In December 2011, the United Nations officially declared October 11 the International Day of the Girl in response to worldwide gender inequality. Comprising 8.5% of the global population, there are 583.9 million girls between the ages of 10 and 19, a number that is expected to grow by more than 23 million in the next 15 years. As one of the fastest growing segments of the population in developing countries, girls are catalysts for social change. The Day of the Girl presents girls with the opportunity to mobilize their efforts and promote human rights for young women.

The ability of girls to attain leadership positions in developing countries is limited by insufficient identification mechanisms. Many governments lack the resources to accurately issue birth certificates and national identity cards. If a girl does not have proof of her identity, she is unable to attend school, get a job, purchase land, start her own business or vote. Her voice in society is rendered useless as a result of bureaucratic inefficiencies. The U.S. has expanded its foreign policy initiatives to support programs that assist developing countries in improving their national registration systems with the hope of increasing the visibility of girls in demographic statistics.

Girl Up is an innovative campaign of the United Nations Foundation that is dedicated to making girls count. This organization allows American girls to become global leaders by raising awareness and funds for United Nations’ programs that target the world’s hardest to reach adolescent girls.

The Fight for Girls’ Rights

In preparation for the Day of the Girl, Girl Up launched the 11 Days of Action initiative. Julie Willig, Girl Up’s grassroots officer, described 11 Days of Action as “a celebration of the strength of girls in developing countries and the passion of Girl Up supporters to make a difference. Starting on October 1 and leading up to October 11, each day offered a new call-to-action, along with the story of an inspiring girl and the profile of a celebrity or public figure who is active in the fight for girls’ rights.” One of the call-to-action requests invited Girl Up supporters to collect advocacy cards from their friends and family in support of the Girls Count Act 2013. These cards will be delivered to Congress as government officials debate the passage of this piece of legislation that will help implement a nationally recognized proof-of-birth system in developing countries.

High school girls around the globe organized events and fundraisers to support Girl Up. The Miami Country Day Girl Up Club raised $8,800 to support adolescent girls in developing countries by selling bracelets, hosting a bake-off and coordinating a fashion show. Vilma, a teenage girl from the Western Highlands of Guatemala, joined the Guatemalan Parliament for Childhood and Adolescence where she can propose solutions to issues affecting the welfare of children in her country.

Katlyn Grasso, a youth champion for Girl Up and a Wharton School junior who is starting her own organization to provide young girls with the tools to succeed, says, “I believe that empowering girls is the only way of addressing gender inequality. Girls must be told at an early age that they have the potential to become influential leaders before they fall victim to their own self-doubt. By educating themselves and raising awareness about the international issues facing girls, young women are developing the skills they need to become the next generation of leaders.”

Who is Malala Yousafzai? Why do you think she was nominated for the Nobel Peace Prize?

Describe the connection between education and the strength of young women around the world. Does this help you view your own educational experience differently?

Do you feel that girls in your school are empowered? How so? How do you think you can contribute to international girls’ rights?