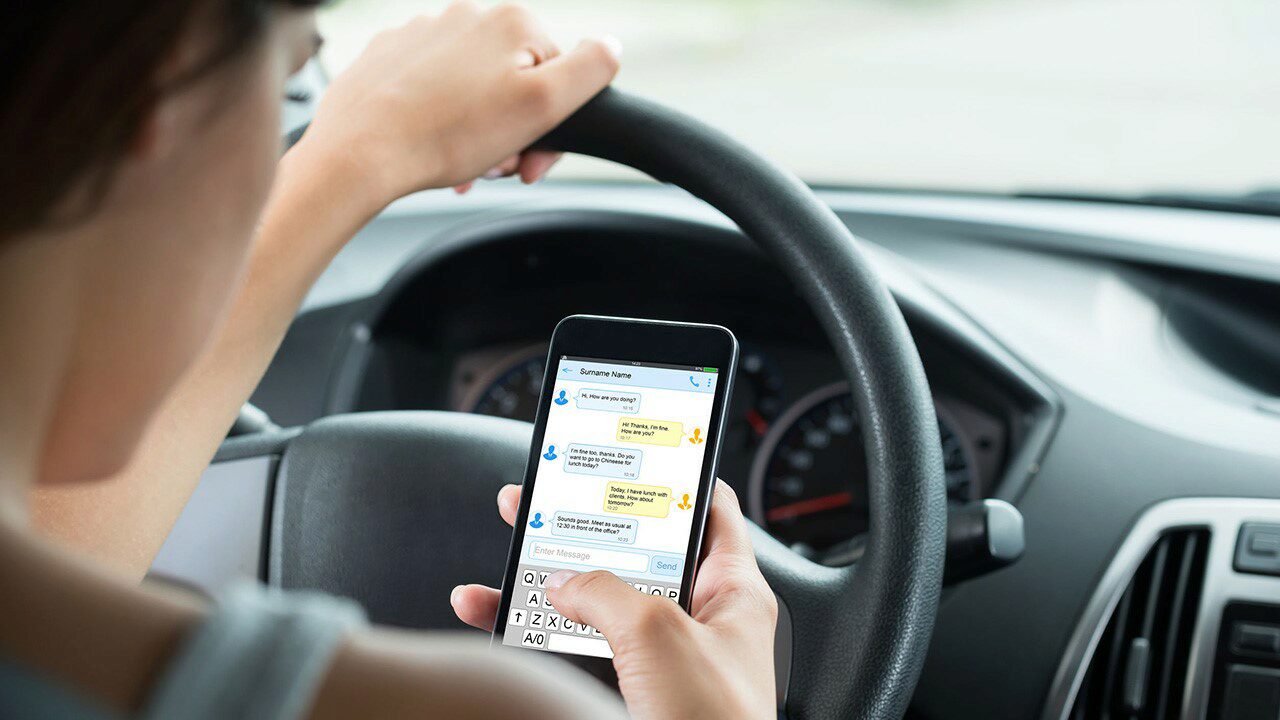 You already know that you’re not supposed to text and drive. Your parents have lectured you endlessly about it, you’ve been taught the horror stories about it in driver’s ed class, and you probably live in one of the 49 states where it’s illegal for teens to text behind the wheel.

But the numbers suggest you’re not always getting the message.

Teens were responsible for 9% of all the fatal crashes involving distracted drivers in 2017, according to government figures. While the percentage seems small, that’s nearly 300 deaths that could have been prevented. Not to mention countless injuries.

Kit Delgado, an emergency room physician who’s also an assistant professor at the Perelman School of Medicine at the University of Pennsylvania, gets that it’s hard to keep your hands off your phone. He sees it all the time in patients who come into his ER, like the college student who was heading down the highway to pick up his girlfriend when he heard his phone ding. He picked it up, dropped it on the floorboard, reached down to get it and crashed into the guardrail.

“You talk to any teenager in the country, and they’ve been beaten over the head that texting while driving is dangerous,” Delgado says. “But the decision to reach for that phone can be impulsive, it can be emotional, it can be subconscious and automatic. Even though if you were to step out of the situation, you would say you shouldn’t be doing this.”

The Imperfection of Human Decision-making

Years of treating people who have been hurt in distracted driving crashes is a big reason why Delgado is researching this topic. He’s heading up a multimillion-dollar grant, one of the largest ever funded by the federal government, to figure out the best ways to use technology to help drivers put down their phones. The research team includes experts from the fields of medicine, behavioral economics, psychology, insurance and technology. They hope their work leads to the development of more smartphone programs that can nudge drivers into the correct behavior, like apps that automatically switch on to prevent incoming notifications while in the car.

“What my research group is trying to focus on is how can we design around the imperfection of human decision-making,” Delgado says. “I think we can make a big difference if we can solve for it the right way.”

For starters, Delgado says, “texting while driving” is an antiquated term for talking about the problem. Distracted driving means anything that takes your attention away from the road, whether it’s that Starbucks frappuccino you’re trying to sip, or arguing with your best friend about your Spotify play list. Conversations, eating, drinking, texting, checking emails and social media notifications, using navigation and music apps, even putting on lipstick all contribute to distracted driving.

“For me, it’s not necessarily about cell phones, it’s about all the facets that can be distracting,” notes Catherine McDonald, an assistant professor at the University of Pennsylvania School of Nursing who has been studying teen driving for a decade. She’s working on the grant with Delgado and, like him, is motivated by her own experiences as a nurse treating young people injured in car crashes.

“What’s important to remember about driving is that you’re making decisions not just about yourself, but about other cars that you’re not controlling.” — Catherine McDonald

The research is still in the data-collection phase. Some of that data is coming from an app developed by TruMotion and being used by Progressive Insurance to capture all kinds of driving information – like hard breaking, speed, acceleration and distance traveled. The information will help the researchers figure out how to best use smartphones to help drivers of all ages.

“Tech is pervasive in the lives of teens. It’s a part of their very fabric, and the technology that we think of often is their smartphones that are with them all the time,” says McDonald, who also works at the Children’s Hospital of Pennsylvania Center for Injury Research and Prevention. “This generation of drivers has grown up with the cellphone. They’ve had phones, they’ve seen parents with cellphones, so that piece of tech is a big part of their lives. When we move to the role of driving with teens, it’s figuring out how to keep them safe with that technology.”

To be fair, teens aren’t the worst offenders. Delgado says millennials – typically people between 25 and 34 – are the most distracted drivers of any age group. But the professors say that the lack of driving experience makes distractions most dangerous for teens. “We know it’s one of the leading contributors to fatal crashes in that group,” Delgado notes.

Teens may be doing things they think are safer, like waiting until they’re stopped at a red light to check notifications. But that’s time they could be using to assess what’s coming next – changes in cross-traffic patterns, a ball rolling into the street, a stalled car, and so on. “They need to be using all opportunities to take in information about the road,” McDonald says. “What’s important to remember about driving is that you’re making decisions not just about yourself, but about other cars that you’re not controlling.”

McDonald believes the distracted driving will decrease when society accepts the danger as a norm. For example, smoking, drunken driving and not wearing seat belts are all risky behaviors that have been reduced as people have internalized the message that they are dangerous. She also believes individualized approaches are needed, including assistive technologies.

The professors, guided by their research, were asked to give their best advice for teen drivers, and here’s what they suggest:

The professors practice what they preach. McDonald uses Apple Auto, and Delgado has a phone mount and a Do Not Disturb app. “It helps keep me honest,” Delgado says. “I’m busy like everyone else, and taking a few minor steps to counteract those urges to use the phone helps. It’s not easy, but there are a few things you can do that help more than willpower, which almost never works.”

That college student who crashed into the guardrail survived, but he had a head injury. Delgado wants to see more of his patients walk away from car crashes, and that starts with drivers understanding that nothing is more important than what they are doing behind the steering wheel.

Hear the story of safe-driving advocate Liz Marks, who was 17 when she crashed her car while trying to read a text from her mom. She suffered a traumatic brain injury and facial injuries, and lost her sight in one eye and sense of smell.

Dr. Delgado says that his study is trying to figure out “how can we design around the imperfection of human decision-making.” What does that mean and how does it apply to the issue of texting while driving? What other issues might it involve?

How many of the professors’ driving tips do you follow?

As a passenger, are you confident enough to speak up if you think the driver is distracted by their phone or just not paying attention? Why or why not?

7 comments on “Tackling Texting While Driving: ‘The Decision to Reach for That Phone Can Be Impulsive’”