From military missions to canine soccer games, Daniel Lee, an engineering professor at the University of Pennsylvania, has been working on making robots do it all. Lee, who recently spoke about the future of robotics as part of the Executive Master's in Technology Management program at Penn, has an ambitious goal: to learn how to make robots think and act like humans.…Read More 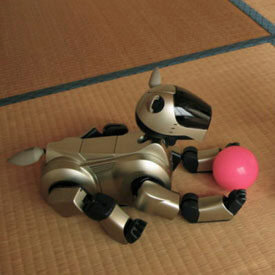 A professor in the University of Pennsylvania’s School of Engineering and Applied Science, Daniel Lee works on research projects that advance humankind’s scientific knowledge and understanding.

Over the last five years, Lee’s projects have included coaching a highly competitive canine soccer team, entering a challenging road race in the California desert and teaching a dog how to do a back flip. That last one is even harder than it sounds, as Lee recently demonstrated. The pooch successfully flipped backwards on top of a three-foot high demonstration table but then caught the edge and fell on the floor with a loud thud.

Thankfully, Lee’s subject was not a real dog, but a Sony Aibo — a robot. And while there is an element of whimsy in his research, Lee’s projects all advance the professor’s ambitious goal: to learn how to make robots think and act like humans.

Lee’s work is done for more than mere academics. The Pentagon is spending billions to develop robots that can aid or replace human soldiers. The U.S. Department of Defense’s Future Combat Systems (FCS) modernization initiative is funding research to develop that technology. Among its recipients are Lee and others on a Penn team that was awarded $22 million by the Army Research Lab to create robots that can operate in combat zones with little supervision.

While military uses have tended to dominate the development of autonomous robots in America, business opportunities for smart robots are also viable elsewhere, according to Lee, who points out that Japan’s research into intelligent robotics has been oriented towards helping that nation’s rapidly aging population perform domestic tasks. Lee envisions commercial applications down the road. Current research on these technologies has great potential to impact future industries and businesses.

Lee was drawn toward the study of robots after he went to work for Bell Labs during the 1990s. He wanted to learn more about why — despite rapid advances in computer technology — robots were still unable to perform tasks that humans and other animals can handle with ease. Lee now studies the biology of living creatures to better understand how we compute information, and works to transfer that information to the world of robots.

To build a smarter machine, the best road map to follow is the human brain. Over time, Lee said, the steady improvement in robots’ ability to sense their surroundings and perform motorized tasks will enhance their artificial intelligence — their ability to perform certain tasks without continuous human guidance.

The “UPennalyzers” — a soccer team created by Lee, Penn engineering students and faculty — consists of four robotic dogs. They use wireless communications to talk with their teammates — but they are not controlled by humans during the course of the 20-minute games, which are played on a three-meter by five-meter field.

Lee said the robot games were crude at first. “The ball would go into the corner for a half-hour, or they would kick it into their own goal.” But over time, the robots developed the intelligence to play soccer at a higher level. “Now they can communicate: ‘You go for the ball and I’ll play defense,'” he said.

One reason the team uses robotic dogs instead of humanoid robots is that it is harder for robots to walk with two legs. In recent years, Lee and his team have received at least $3.5 million in grant money from DARPA — the Pentagon’s Defense Advanced Research Projects Agency — to teach robots to walk and also to develop a class of robots that can use sensors to autonomously navigate difficult terrain. The military advantages of such devices, which could transport heavy loads over mountains or across deserts in a dangerous combat zone, are obvious, but successful two-legged navigation remains something of a Holy Grail for robot programmers.

New Use for Cigarette Lighters?

However, developing driverless smart cars — a project that’s also the recipient of significant DARPA funding, with the ambitious goal of making one-third of U.S. military vehicle transportation driverless by 2015 — has proven both more successful and a source of competitive pride for Lee and his students. They recently were among just six teams to complete the entire course at the 2007 DARPA Urban Challenge in Victorville, Calif., held on the streets of an abandoned U.S. Air Force base.

The Ben Franklin Team, composed of students and faculty from both Penn and Lehigh University, had to navigate city streets while obeying traffic laws and signs and avoiding collisions with the other finalists. The Team developed a car that required less power — and burned less gas — by clever placement of fewer sensors. “We were able to use the cigarette lighter to power all the computers on board,” said Lee.

Click here to read an expanded version of this article.