Did My Mom Just ‘Friend’ Me? The Social Media Age Divide

While more adults are embracing social media, they don’t necessarily use Twitter, Facebook and other sites the same way as their kids. For instance, as people get older, social media becomes less an extension of daily relationships and more a place to reestablish old friendships. And when it comes to privacy, older social media users may be the ones to follow.…Read More 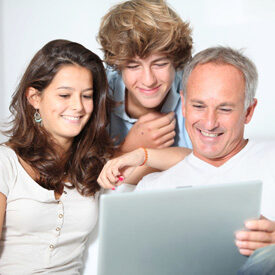 It was a normal afternoon my junior year of high school. I opened my computer to browse Facebook before starting my homework. Noticing a new friend request, I clicked through to see who wanted to add me as a friend. My stomach lurched. The request was from my mom! What could someone my mom’s age possibly know about Facebook?

According to a study by the Pew Internet and American Life Project, half of Americans over 50 use social networking sites today in comparison to the 29% in 2008. Jamie Carracher, in an article titled “How Baby Boomers are Embracing Digital Media” for Mashable.com, claims, “Hesitation to go online is often not because of lack of interest but because many technologies and social networks are not developed with older people in mind.” With more adults using Smartphones, Carracher notes, such hesitation is quickly being replaced by an eagerness to participate in social media.

Similar trends in usage, however, do not mean that people of different generations use social media in the same way. “Older people comment on things, and it seems awkward,” says Rachel Rusonis, a junior at Marriots Ridge High School in Marriotsville, Md. “They don’t understand how to use it to its best potential.” High school students often believe that parents don’t follow the correct social cues of the online world.

People under 35 have always had access to the Internet and are comfortable using it in their everyday lives. On the other hand, adults 45 and older have been raised on print media. In an article for Forbes.com, young writer Timothy Lee explains the hesitation some adults feel about using social media: “When social media arrived, few of their peers were using it so they didn’t either. Especially for news and information. And as a consequence, they never developed the kind of Internet-filtering prowess that comes naturally to many people in my cohort.”

Rusonis says that people her age use sites like Facebook to contact people they see regularly, such as to ask about homework assignments or share inside jokes. She predicts that once she goes to college, she will use social media to keep in touch with distant friends and to find out about campus happenings: “With more events going on in college, social media is a better resource.” Also, many high school students use social media as a way to explore college options. Twitter and college blogs offer inside information from student writers as well as official information from universities.

As people get older, social media becomes less an extension of daily relationships and more a place to reestablish old friendships. According to Deirdre Woods, associate dean and CIO of the Wharton School, “Older people use Facebook to connect with old friends and classmates and also to get news items. They share old pictures to wax nostalgic.” Also, according to University of Pennsylvania college senior Ryan Leifield, “Older generations don’t use it as frequently. It is not as integral in their social lives.” While her parents may prefer print media, Leifield names Twitter as her primary news source.

One key disparity in the way in which different generations use social media is what they are willing to share online. Because younger people have grown up with a constant stream of online information, they are less hesitant to share personal facts through social media. Rusonis points out that her peers are not always conscious of what they display to the world: “Some people don’t realize how easy it is to look at their pictures.”

Woods, on the other hand, states: “I would never ‘like’ expensive Frye boots on Facebook. I might share that on Twitter, but I wouldn’t say that I bought them.” Such displays of personal information are less common for the over-30 crowd. Also, Woods says that she would not share her music on a social media platform because it is “too private.” However, music-sharing sites like Spotify, which currently boasts two million users, rely on people revealing their music preferences to as many people as possible.

Privacy settings are increasingly more important as colleges and businesses use social media to view potential applicants. Woods mentions LinkedIn, a professional network, and Twitter as spaces for companies to post job opportunities: “That way, they are already talking to an audience that is interested in them because they post jobs for their followers.” She also stresses the importance of keeping private and professional engagements separate, naming Google+ as one of the best social networking sites to divide friends and colleagues into different virtual “circles.”

Woods points out that the workplace environment has become increasingly more casual, which may be a result of social media itself. Thus, older generations appear more aware of the divide between professional and private than younger ones. As a growing number of companies take advantage of social media, people will need to more discriminately select what they share online. While social media moves forward, privacy settings will continue to evolve, and customizing what people see remains equally important whether you are 15 or 50.

Behind the Scenes: The Science of Moviemaking