Developing economies around the world struggle with providing ample, affordable food supplies, which compromises community nutrition and overall health. Five teenage women in Northern Zambia are investing new entrepreneurial skills into their remote fishing community through savvy farming strategies and increased employment to tackle the local food crisis. This case study written by Camfed International, an organization that works toward eradicating poverty in Africa through the empowerment of young women, tells the story of Chitundwa’s Poverty Fighters.…Read More 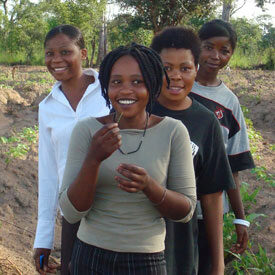 Not long ago, the five young entrepreneurs who call themselves Poverty Fighters knew nothing of farming. They grew up in the community of Chitundwa, Northern Zambia where most people made a living by fishing. The only commonly grown crop is cassava — all other produce was transported from other parts of the country, which meant it was prohibitively expensive for most.

Perceiving a demand in the community for a greater abundance and diversity of crops at affordable prices, the women realized that they could simultaneously fulfill a social need and realize a business opportunity by starting a small-scale commercial farm. “We saw that people in our community were not eating nutritiously because produce was expensive and difficult to find,” says 18-year-old Loveness, the group’s managing director. “We thought: if we start a big farm, we will be able to provide people with nutritious food at good prices.”

These women took part in the Goldman Sachs 10,000 Women Certificate Program in Young Women’s Leadership and Enterprise, which aims to equip young high school graduates to drive the regeneration of rural economies. The program cultivates in young women the skills and the confidence to build strong, sustainable businesses that will stimulate the rural economy through job creation and economic diversification.

The 150 women who participated in the launch of the Leadership and Enterprise program grew up in extremely remote areas of Zambia where opportunities for higher education and jobs are few. They came to the program directly out of high school, at ages 18-20 — a time when many young rural women are at risk of early marriage, unmarried pregnancy and HIV/AIDS.

In the case of the Poverty Fighters, the young women sought training from a local agricultural officer, who taught them which crops would grow best given the soil and climate conditions in their region, and when each crop should be planted.

An Endorsement from the Village Chief

With their new knowledge, Poverty Fighters rented two fields — 1.5 hectares of land in total — from a local school, and they have cultivated their first crop of sweet potatoes, groundnuts, maize and beans. While waiting for the crops to be harvested, the group has actively marketed its produce, and they already have pre-orders and a waiting list. They are also contributing to the local economy through job creation: At first, the five women tended the fields on their own, but they have now hired and trained eight community members to work with them.

Such early success has motivated the women to gradually expand their farm and their workforce, addressing the issues of food security and unemployment — and they have bigger ambitions as well. Some of the women plan to go to college to study farming and livestock, which will help them professionalize their venture. “We are seeing that our vision was right — commercial farming has potential to make big improvements in our community,” says Joyce, the group’s secretary.

At first, some community members questioned why the women chose to pursue commercial farming, as it is not typically a vocation for young women. However, through determination and hard work, they have earned the endorsement of the village chief, and their main stakeholder and advocate is the local headmaster.

In providing affordable, nutritious food and creating jobs, these young entrepreneurs are changing the landscape of a community that once relied on the fishing industry for income and nutritional sustenance. It has given Loveness and her fellow Poverty Fighters a new status as community role models. “When I started this program, I had no idea that I could become a leader,” she says. “Now I know that when my community is facing a problem, I have the ability to find a solution.”

Empowerment 2021: Advice from 11 Leaders We Met This Past Year