Announcing the Regional Finalists for Our 2019-2020 Investment Competition 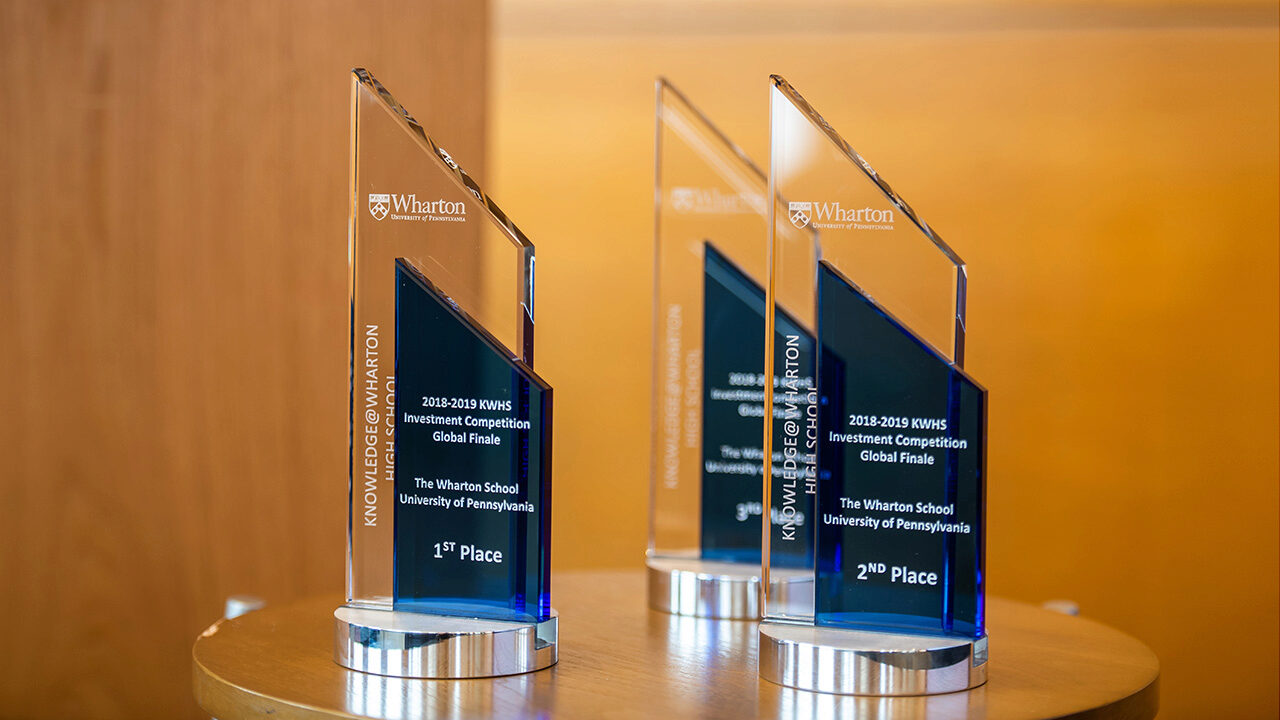 The Wharton Global Youth Program is excited to announce the finalists for our 2019-2020 global investment competition!

It has been a dazzling decade-ending (and beginning) challenge, since trading began on the Wharton Online Investment Simulator (OTIS) on October 7, 2019. More than 800 student teams from 25 countries turned in mid-project team reviews in November, resulting in 572 final competition reports submitted on December 17, 2019.

Our Wharton Global Youth and Aberdeen Standard Investments evaluators in Philadelphia read hundreds of final reports through the Christmas break and into the new year, assessing if they met important short and long-term criteria, and looking for several pillars of strength, including a deep understanding of the investment competition client whom student teams are trying to win over, Reshma Sohoni; clear and creative strategies; and extensive analysis and teamwork.

“Our team was impressed by the quality of the final reports across regions in this year’s competition,” says Eli Lesser, executive director of the Wharton Global Youth Program. “Students showcased strong financial knowledge and teamwork, and many worked hard to understand their potential client as a first step toward developing comprehensive, creative and sound investment strategies.”

And with that, here are the schools that the finalist teams will be representing at the 2020 KWHS Investment Competition regional finals:

Region 4 (Latin America and the Caribbean)

Congratulations to all this year’s finalists! The student teams from these schools will now compete in the regional final round in February and March, the top winners from each advancing to the Global Finale at Wharton in Philadelphia on May 8 and 9. The Region 4 finals will be held on February 15 at BTG-Pactual in São Paulo, Brazil; the Region 2 finals at the Infosys campus in Bangalore, India, on February 22; the Region 1 finals, sponsored by China Merchants Bank, are scheduled to follow on March 7 at the Penn Wharton China Center in Beijing; and the Region 3 finals will be on March 16 at Wharton in San Francisco. Be sure to sign up for our newsletter and stay tuned to the KWHS Bulletin for all the results.

The Wharton Global Youth team is fanning out across regions this year to attend the finals and meet the top teams – with our very first trip to Brazil in a few weeks to celebrate the results of our newest Region 4 with sponsor BTG-Pactual, a Brazilian investment banking and asset management firm. We are eager to engage more students and educators throughout the region. “This year’s addition of a Latin America and Caribbean region and the resulting finals in São Paulo, underscore our mission to connect high school students and educators around the world with our Wharton business, finance and leadership opportunities,” says Serguei Netessine, Wharton’s Dhirubhai Ambani Professor of Innovation and Entrepreneurship and vice dean for Wharton Global Initiatives, which oversees the Wharton Global Youth Program. “These future business leaders demonstrate time and again through our competition and other programs that innovation transcends borders. We plan to continue to diversify and broaden our reach.”

Stay connected with all this year’s investment competition teams, and maybe even see quotes from your own final report, by following Wharton Global Youth Program on Instagram @WhartonYouth, Twitter @WhartonHS and Facebook.

Join Us in Chicago this August!