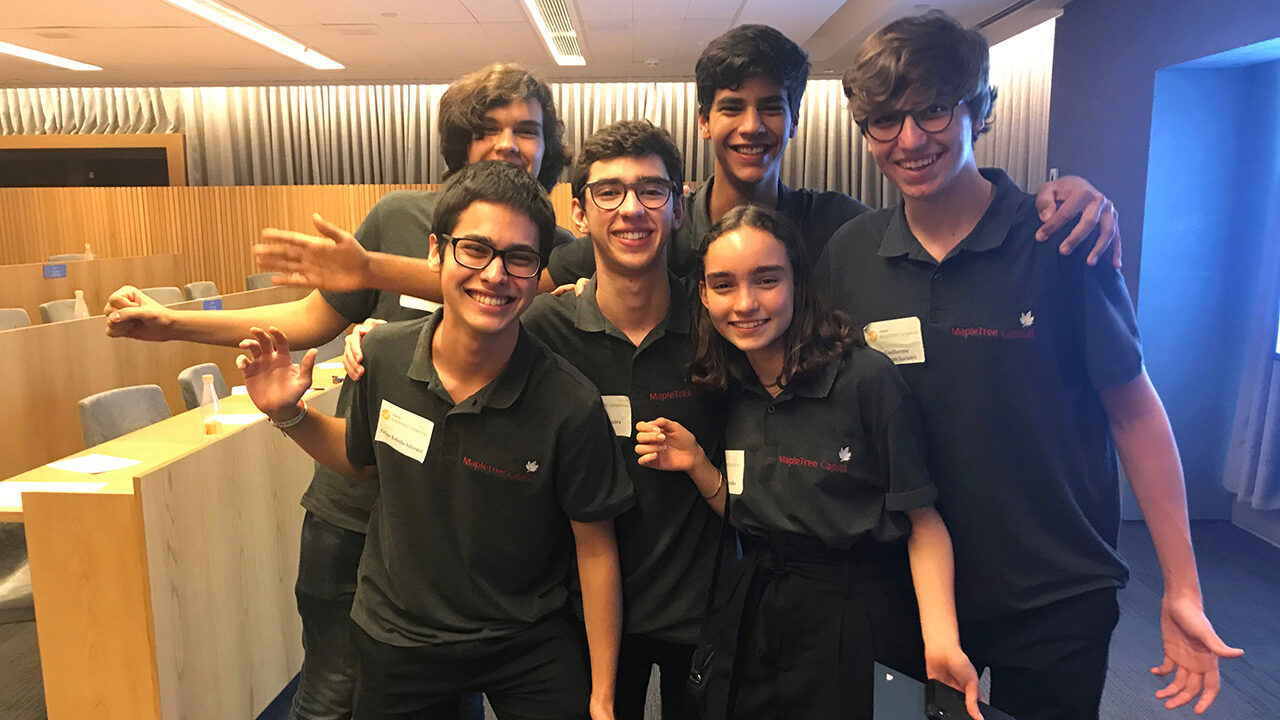 February is a festive time in Brazil. The country has spent the past few weeks preparing for and reveling in Carnival, an annual festival known for its dancing in the streets.

Members of the Wharton School’s Global Youth Program team took to the Brazilian cityscape for reveling of a different kind during our first-ever Investment Competition Region 4 Final in São Paulo on February 15. The 10 finalist teams of high school students from our newest Latin American and Caribbean region (all of which were from Brazil) gathered at the headquarters of BTG Pactual, the event sponsor, to deliver their 10-minute investment-strategy presentations to a panel of financial professionals. It was the culmination of 12 weeks of investment portfolio and strategy development, supported by teamwork, research, creative thinking and teaching and motivation from their team advisors and mentors.

“The most amazing thing was to see young adults so enthused with investing concepts and the parents cheering them on and motivating them to learn. We could see how much each team had worked on their projects and how much it meant to them,” said Deborah Mason Pontual, president of the Wharton Clube Do Brasil, the largest Wharton alumni club in Latin America, and head of international affairs and college counseling for Colégio Bandeirantes high school. Pontual and her colleague Stephanie Salem, thrilled to see Latin America become an official competition region this year, have previously run informal finals in São Paulo for the top Brazilian teams in Wharton’s KWHS Investment Competition.

The teams agreed that February 15 was a memorable day, enriched by a presentation from one of the top Brazilian performers in last year’s investment competition, Eagles Value Added (comprised of different students than this year’s EVA team). “The competition ignited my passion for finance,” said Breno Sallouti, adding he planned to pursue a career in the field. The former EVA team also acknowledged the importance of financial literacy, pointing out that some 65% of Brazilians are financially illiterate.

Many of this year’s teams expressed appreciation for their new investing knowledge. “We all had a blast taking part in the competition,” said Isabela Carvalho, team leader of first-place Maple Tree Capital. “The past few months have been ones of intense learning, communication and teamwork, and the confirmation of that came in the Region 4 finals… During the event, we also had the chance to learn more about the investment world.”

Carvalho and her teammates, along with Region 4’s second and third-place teams, are now preparing for the investment competition’s grand Global Finale, held on May 8 and 9 at Wharton in Philadelphia. “Our team expects to refine our presentation and to have a wonderful time getting to know the University of Pennsylvania for the first time,” added Carvalho. They will also get to know students from the advancing top three teams in each of the other three investment competition regions, the finals of which are being held around the world in February and March. Check back to the KWHS Bulletin soon for all the results.

We’ll leave you with a few words from Ilan Ryver, a judge of the February 15 Region 4 final: “You don’t know everything. You won’t know everything. That is the beauty of finance. You are always learning.” The KWHS Investment Competition and the Wharton Global Youth Program help start students on that lifelong journey. #KWHSInvests