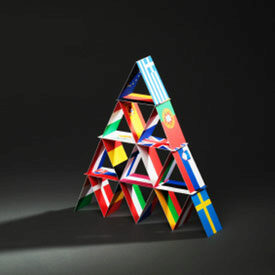 On June 22, the leaders of Germany, France, Italy and Spain met in Rome to discuss pulling Europe out of its debt crisis. It was the latest event in the ongoing economic saga of the European debt crisis, a financial catastrophe that has crippled certain parts of the eurozone. In 1999, a number of countries in the European Union  adopted the euro as their common currency – a decision that has had both good and bad consequences.

New developments surrounding the crisis unfold daily. Just this week in Greece, one of the hardest-hit countries economically, political parties maneuvered to form a new government. On June 20, Greece ushered in a new coalition government that is in favor of a bailout (a loan to help its failing economy) that would keep Greece in the eurozone. For now, all eyes are on Germany and its Chancellor, Angela Merkel. As the eurozone’s biggest economy, Germany is in a position to pick up the tab for the debts of Europe’s less competitive economies, including Greece, Spain and Italy. Meanwhile, borrowing costs in Spain have become astronomical, and the country, along with Italy, is headed for a bailout.

Ben Edelman — 16 and a rising junior at West Windsor-Plainsboro High School North in New Jersey who is vice president of the school’s Fed Challenge team (an economics competition run by the Federal Reserve Bank of New York) — knows a thing or two about economic issues. Of the European debt crisis, he says, “The effects of this downturn would have a significant impact upon teenagers’ lives. The unemployment rate for 16- to 19-year-olds looking for work has already risen from 14% to 25% during the last six years, but teens would be faced with an even poorer job market. Student loans would be even harder to obtain, and would become costlier in the future. In the long run, a European collapse would significantly delay the recovery from the recent recession, meaning that economic conditions would probably remain weak for current teens in the years to come.”

An edited version of the conversation is below.

Knowledge@Wharton High School: What are the fundamental issues fueling the European debt crisis?

Mauro Guillen: For the last five years, everybody in Europe borrowed money – households, banks and the government. Then came the global financial crisis of 2008, and that created a situation in Europe and the United States in which the economy did not do well and unemployment started to increase. The government can’t collect taxes, so that increases the deficit. On top of that, when there are more people out of jobs, you have to pay them unemployment insurance. That’s how we get into a situation in which we have large leverages and people are in debt. For a while we were all borrowing, but now nobody wants to lend money to the banks, the households or the governments because investors fear that maybe they won’t get their money back. Those who are willing to lend want to charge very high interest rates. It’s a bad dynamic that has been in operation for a few years.

KWHS: Why are countries that adopted the euro more impacted than other non-euro countries?

Guillen: We have 17 countries in Europe that agreed to have [a common] currency, [the euro]. When you have a common currency, you get some benefits. Countries like Portugal, Greece or Spain can borrow money at lower interest rates because other countries like Germany [in the eurozone] have lower interest rates. At the same time, [eurozone] countries like Portugal, Spain and even Italy haven’t improved their competitiveness or productivity over time, which is why they are always falling behind countries like Germany and the U.S. If you have your own currency [and don’t use the euro], there is one very easy way to make adjustments [for your economic weaknesses], which is to devalue your currency. You let your currency drop in value, and that makes your products and services more competitive. But because these countries adopted a common currency, while they got the benefit of lower interest rates and therefore borrowed a lot, they didn’t have this flexibility to adjust their currency and their competitiveness. So they borrowed a lot and got into debt, and at the same time lost competitiveness by not being able to devalue their currency. Now they’re between a rock and a hard place.

KWHS: What are a few key ways that Europe’s economic woes affect the U.S.?

Guillen: Europe is the largest market in the world. Everybody who sells to Europe, like the Chinese, the Indians, the Latin Americans and the U.S., will suffer because they no longer have that growing market. Europe is 25% of the global economy. If there is volatility there, then that increases the overall volatility in the world because Europe is such a big player.

KWHS: What can we expect from the crisis in the coming weeks? When will the economies of Europe recover?

Guillen: It depends on so many [factors]. What will happen with Greece; will it leave the euro? Can Spain and Italy manage to get their economies growing again? At some point, there needs to be a moment of truth. Either Germany and the other economies that are healthy in Europe agree to a European-wide guarantee or solution to the problem, or there could be a break up of the euro currency union. Sooner or later, they will find a way out of this. In the process, they could do a lot of harm to themselves and to the rest of the global economy. The prospects for people in the U.S. finding a good job depend on what’s going on in Europe. Lingering problems in Europe will continue to affect the rate of recovery of the American economy. This is a globalized world; things are connected.

One comment on “Pressure Mounts in the European Debt Crisis”

Rye Barcott of Carolina for Kibera: A Marine’s Take on the Power of Social Entrepreneurship