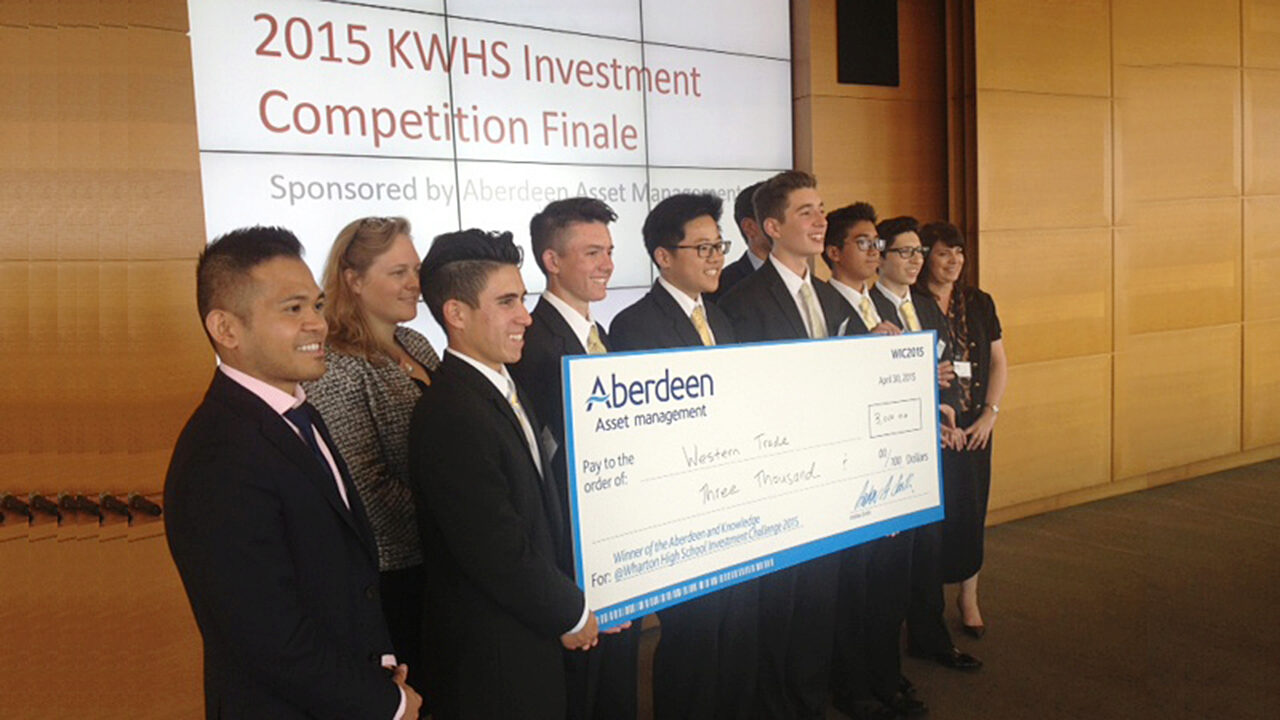 When Scott Stimpfel, former director of educational initiatives for Knowledge@Wharton High School, first developed the annual KWHS Investment Competition in 2012 along with a team of Wharton undergrads, he had a key goal in mind: financial education for high school students that is also fun. That first pilot project with partner Aberdeen Asset Management involving primarily Philadelphia high schools, engaged a few dozen students — and oozed with potential.

Smart investments pay off. As our 2015-2016 KWHS Investment Challenge kicked into gear last fall, our competition team couldn’t help but reflect on those early numbers. With interest growing from students around the world, particularly in India, we decided to launch a separate South Asia and Middle East regional investment competition, followed soon after by our Global Regions competition, which included schools from primarily the U.S., as well as Australia, Canada, China and Mexico.

A total of more than 500 teams registered for both competitions, resulting in more than 300 submitting mid-project team reviews and some 200 turning in final investment strategies. With individual teams comprised of four to nine students, well over 1,000 high school students were learning investing concepts, placing trades on Wharton’s OTIS platform, communicating and working out their team dynamics – and, ideally, enjoying the ride.

‘Today, I am the Shepherd’

We hear often from educators that they appreciate the wealth of free resources we provide to help them teach concepts and inspire classroom conversations during the competition. “It has been priceless to me and the kids who are the benefactors,” says Kim Zocco, a teacher at Archbishop Edward A. McCarthy High School in Florida, who this year had 15 teams from three separate finance classes compete in our Global Regions investment competition.

While McCarthy High had a team among last year’s top 12 and traveled to Philadelphia to participate in our big Wharton Day finale event at the end of April – during which top teams present their investment strategies to a panel of expert Aberdeen judges — this year the McCarthy 15 were edged out by stiff competition from some impressive finalists, which are listed below. Still, Zocco followed through on the competition, designing her own in-class presentations, complete with team incentives (candy!) and an ice cream party for the winners.

“We had a wonderful experience, as always,” adds Tasha Allred, an educator with Williamsburg Academy, an online program that entered 13 student teams into this year’s competition. While two Williamsburg teams made it to last year’s finale (Skyping in their team presentations from a multitude of states), this year they too fell short of placing in the 2016 top 13.

Even so, students like Camryn Sawyer, a Williamsburg high school junior from Alaska and leader of this year’s The Wise Stewards investment team, have a new perspective on personal finance as a result of their competition involvement. “Before my Wharton experience, my understanding of finance was limited,” admits Sawyer, who is now considering a career in finance, as well as investing on her own. “I was a sheep in the land of dreams hoping to understand it. Today, I am the shepherd. The financial process and its complexities only drive me to create and innovate, to set higher standards than the ones set before me. I’m excited to apply what I’ve learned here towards my future.”

Camryn and hundreds of other finance-minded students from around the world will be watching Knowledge@Wharton High School in the coming weeks for the results of our Investment Competition finale, to be held on Wharton’s Philadelphia campus on April 30.

The finalists for the 2016 KWHS-Aberdeen Global Regions Investment Competition are:

These teams will be competing in the finale, either in person or via teleconference. They will be joined by the top three teams from our South Asia & Middle East regional competition, which are:

Best of luck to all our finalists! If you have any questions or would like your name added to next year’s competition list, please contact the KWHS Competition Team at kwhscompetition(at)wharton.upenn.edu.