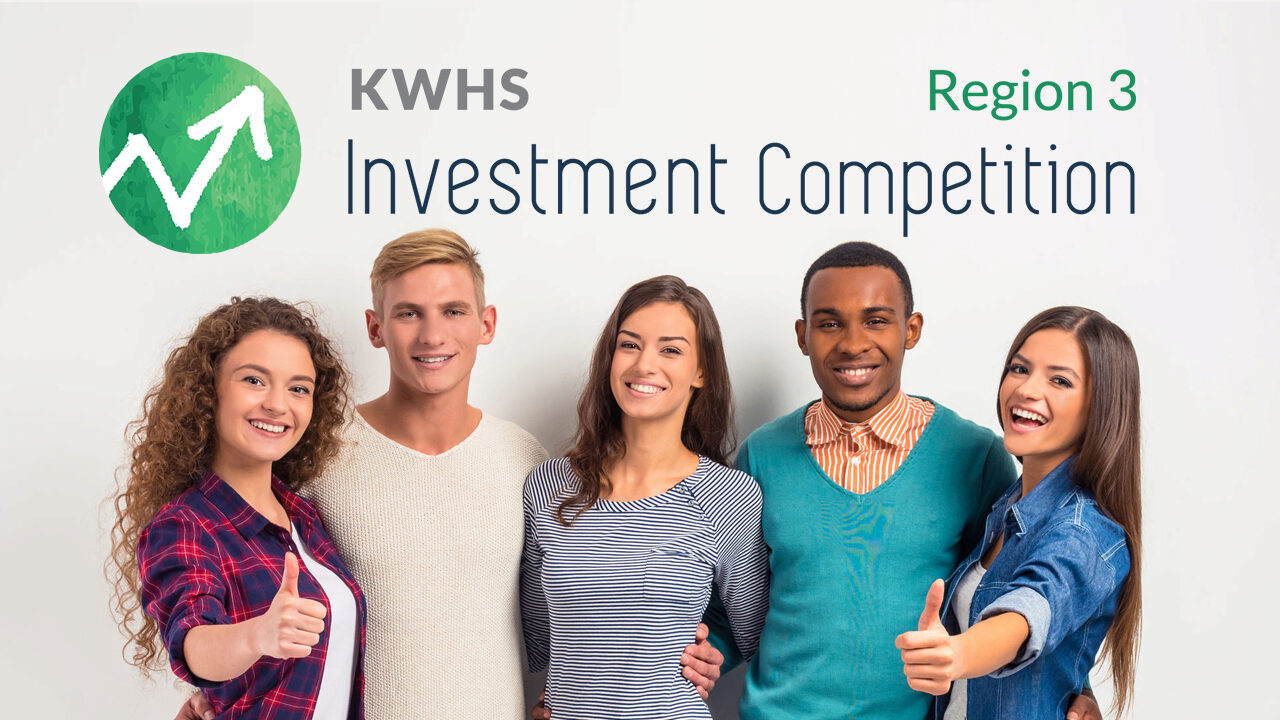 We knew from the get-go that Region 3 of the KWHS Investment Competition was a pack of fierce competitors. We received hundreds of registrations from teams in the U.S., Brazil, Canada, Cyprus, France, Germany, Norway, Romania, Switzerland and the United Kingdom. Then when the mid-project team reviews started streaming in – nearly 300 by the February 12 deadline – we were captivated by the collective wave of strategic thinking, deep analysis and tough team deliberations. No longer just high school students, these teams were transformed into novice investors on a mission to build potential client Jack Abraham’s wealth in cohesive, creative and SWOT-savvy ways.

By the time the 160 final team strategy reports arrived on March 25, we were expecting greatness – and Region 3 did not disappoint. The KWHS team eagerly delivered the papers to our expert review panel at Aberdeen Standard Investments in Philadelphia, which has been a partner and supporter of the KWHS Investment Competition since its inception in 2012.

Brianna Leporace, marketing research and intelligence analyst for the U.S. at Aberdeen Standard Investments, assembled a group of 13 other Aberdeen professionals to read and evaluate the Region 3 reports. “We were extremely impressed with the high caliber of the final investment policies submitted this year and applaud all teams for their efforts in the KWHS Investment Competition,” said Leporace, whose team of Aberdeen judges were from different areas of the company, including equity, fixed-income and alternative investing, as well as marketing and distribution. “The competition continues to get stronger and more competitive every year, so selecting the finalists to advance to the Global Finale was very difficult. The students demonstrated a solid understanding of investing concepts through the articulation of their investment strategies and analysis, and we enjoyed reading about their educational journey over the course of the competition.”

In the end, the results truly reflect the global evolution of the KWHS Investment Competition. The student teams advancing to the Region 3 regional and Global Finale on May 5, 2018 are:

In addition to our in-kind sponsor Aberdeen, we will also be welcoming aboard several new corporate sponsors, including Dechert LLP, Dilworth Paxson LLP, Finclusive Capital, Principle Quest Foundation and UBS. All of these companies embrace the underlying mission of the KWHS Investment Competition, which is to help high school students learn investing, communications, entrepreneurship and teamwork, and to become more financially literate.

While we could only select 12 top teams, we would like to pay tribute to some of this year’s other devoted Region 3 competitors by highlighting memorable moments from their final papers. So much analysis, critical thinking and insight. Great work, Region 3!

“Our team has decided that three factors are the most important to have exposure to: momentum, value and growth… consider that each company is a soccer team going to compete on Russia’s 2018 World Cup. Each of the different factors, with assumptions made, is relatable to the characteristics of each team. Momentum: the number of games the team has won in a row; Value: the defensive potential of the squad; Growth: the attacking potential of the squad.” Dangoor Investments, St. Paul’s School, São Paulo, Brazil

“A strong resource for Team Sona was Wharton Professor Adam Grant. He was a figure highly spoken about at last year’s KWHS Global Finale, and our team found his book Originals very applicable to a competition of this nature. If our team wanted to stand out to Jack Abraham as the best potential client, we knew that we had to think, visualize, and collaborate like “Originals.” After a careful read, analysis, and discussion about Grant’s ideas on Originality, we sought to implement it not only in our initial strategy, but also in more collaborative aspects such as unbiased team decision-making, ethical quandaries, skepticism and judgment, and elimination of conformity and emotion in the investment process. With Grant’s teachings and values, Team Sona was able to adopt a fantastic set of approaches that facilitated the way team members respected and interacted with each other.” Team Sona, Allen D. Nease High School, Florida, U.S.

“We recommend for KWAM is to invest in all of the sectors, taking care to invest equally in both the cyclical sectors and counter-cyclical sectors in order to reduce the risk of specific sectors losing value. Industry wise, the software industry is a safe investment choice, and the diversified consumer services, machinery, and equity real estate industries are also included in our recommendations. The particular stocks we recommend are Twitter, Adobe Systems, Spartan Motors, TAL Education Group, Southwest Airlines and Semiconductor, which all have had steady growth in recent times. We do not, however, recommend investing into metal industries—such as United States Steel—with the tariffs being placed on steel and aluminum.” NPCA Lions, Collegiate Academy, Pennsylvania, U.S.

“It is beyond doubt that the average investor is frequently portrayed as an evil, greedy and merciless person, and the examples are not few. From Gordon Gekko to Jordan Belfort, the general idea of evilness in the Financial Market is present in our society. Fortunately, this, in most of the cases, is an absolute misconception compared with the reality. The common investor, from home broker to Wall Street investment banker follows an ethical rule.” Monty Python and the Holy Stock, Colégio Bandeirantes, São Paulo, Brazil

“Our team loved this competition as it gave us an opportunity we could never find elsewhere, as none of us have $100k to invest. Working with thousands of dollars to make investment decisions, understanding the markets, and seeing the results have given us a highly educational and motivational experience. Our inspiration to seek professions in this field and invest our own money would never truly have arisen without the experiences we all had during this competition.” Rolling Stone, Downingtown STEM Academy, Pennsylvania, U.S.

“Qualitative judgments arguably played a bigger role than quantitative metrics in our decision-making process, although they work hand in hand. The industry the company operates in, the countries, the quality of the management team, the company’s vision, their target audience – these are all factors that cannot be assigned a value. Successfully recognizing the “soft” skills a company has marks the difference between a star active fund manager, and a passive index fund investor. Anyone can compare numbers on a spreadsheet but it is the reasons behind those numbers that matter. Succumbing to tunnel vision exposes you to making false conclusions based on numbers without context. It is very likely that you may then miss opportunities, or make grave mistakes.” Team Zurich, Zurich International School, Switzerland

“Many of our team members chose to take part in the KWHS competition because they had prior experience with stock market competitions. However, all of the previous competitions were focused on day trading and making as much money a s possible in a short time period. This was our first time participating in a competition that focused on long-term trading. Most of the team members had never considered the dividend yield when buying a stock, because we never participated a long-term investment competition. Participating in this competition helped us learn a lot more about finance and the different statistics to consider before buying a stock.” Taxmanian Devils, Troy High School, Michigan, U.S.

“The first step to forming our investment strategy was researching Jack Abraham: his age, his professional background, and his ideal risk balance. As a successful entrepreneur, Mr. Abraham fittingly welcomes risk for the potential of returns. However, despite his appeal to “very calculated risks”, his age of 32 years and our fundamental analysis pushed the ideal strategy for Mr. Abraham to balance innovation and market potential with value and long-term stability.” InvestorPrep Partners, Bellaire High School, Texas, U.S.

“Facebook is probably our favourite holding. Some of us are so convinced from this company that they even bought Facebook stocks in real life. What makes Facebook so special? Firstly, it has a deep moat created by the so called “network-effect,” which means that people won’t move away from Facebook as long as their friends only use Facebook (or other platforms from Facebook like Instagram, Whatsapp, Messenger or Oculus). And even if there is another competitor, which threatens to steal market share from Facebook, they just can acquire the competitor or copy their business model very quickly, what they, by the way, have already successfully done in recent years (e.g. Snapchat Stories).” List Capital, Friedrich List High School, Karlsruhe, Germany

“The biggest challenge was definitely the uncertainty that comes with everyone’s – sometimes conflicting – opinions on stocks. We made decisions by informally discussing it: We brought up the stock’s name, everyone looked it up on their computer if it was an obscure company, and then we all pitched our opinions. We also informally assigned sectors to each member, which was just a way of separating it with ease; however, everyone ended up looking into every sector by the end…The most important skill coming from each member was definitely the different points of views to the same stocks/situations.” Prophets of Profit, Gulliver Prep, Florida, U.S.

“In our view, this is a crucial moment for the financial markets as there are almost 10 years since the Great Recession. The markets face right now multiple adversities like a trade war (USA vs Europe and China), the unknown Brexit dilemma, the growing of isolationism of big powers (USA, China, UK) as well as the relative unstable political situation around the globe (tensions: USA and UK vs Russia; also USA vs North Korea). Moreover, the increasing inflation due to tax cuts and raising US wages, followed by a rising interest rates environment will be in our view the biggest enemy on the economy. To stop the inflation, the Fed and the Central Banks around the world would need to find the right timing for monetary policy out of one trial. If they miss, the result will be an abrupt recession, and we need to be prepared. Therefore, we tried to create an all-weather portfolio in which sectors are interconnected.” AlphaStrike Capital, Avenor College, Romania

“This project served as a practice in keeping our composure during periods of losses. As a stock trader or manager, you will almost certainly have periods where the value of your portfolio decreases. For us, this happened during our three-month venture. Experiencing a loss, while not ideal for us, actually helped us better learn about investing. We realized that as long as you make smart and secure buys, your portfolio will be solid and grow in the long run. Participating in this competition further reaffirmed for us that the stock market goes through cycles, and a period of losses does not necessarily represent complete failure or a reason to panic.” The Oakland Traders, West Chester East High School, Pennsylvania, U.S.